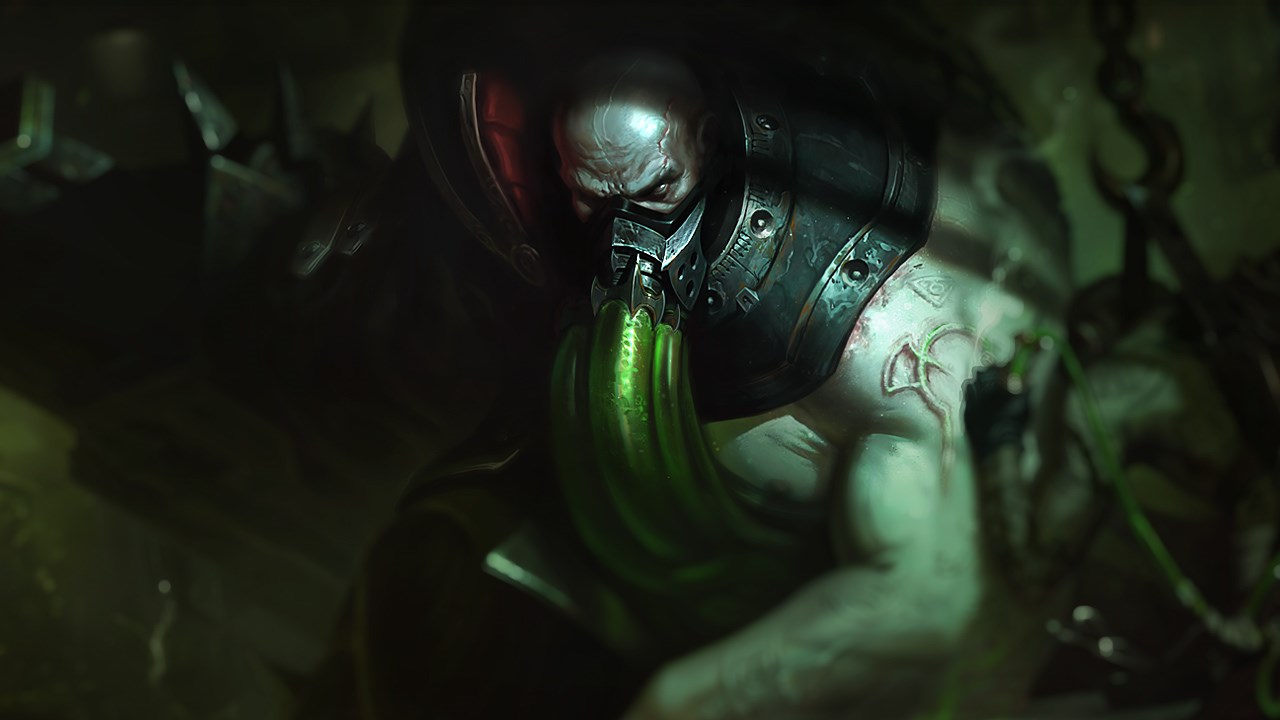 Urgot is a champion in League of Legends.[1]

Innate: Urgot's six legs each conceal a shotgun that covers an arc, together forming a full circle of cover around him. Each shotgun can fire once before incurring a unique 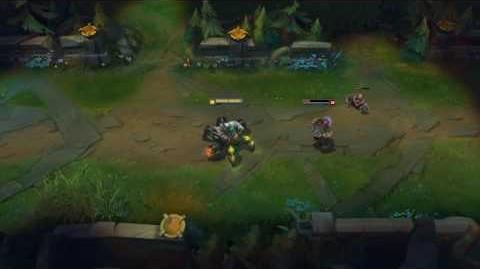 Active: Urgot launches a canister at the target location that explodes 0.3 seconds after it lands, dealing physical damage to enemies hit and

slowing them for 1.25 seconds. 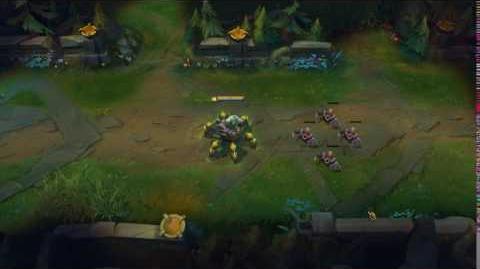 Passive: Urgot's other abilities mark enemy champions for 5 seconds, only one enemy can be marked at a time. At maximum rank, Purge lasts indefinitely and becomes a toggled ability.

champions, refreshing the mark with every attack. While firing, Urgot is able to move and gains 40%

slow resist, but his base movement speed is reduced by 125.

Attacks with Purge deal modified physical damage, with a minimum threshold of 50 against

on-attack damage at 50% effectiveness, but cannot

Purge can be recast after 0.5 seconds within the duration, and does so automatically afterwards. 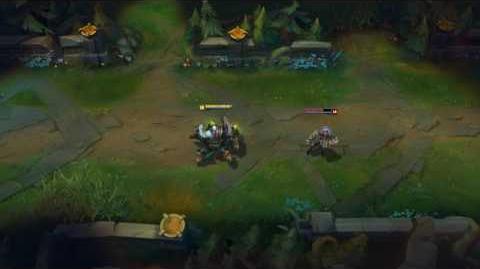 shields himself for 4 seconds.

After the cast time, Urgot

dashes in the target direction, though not through terrain, dealing physical damage to enemies he passes through,

knocking them aside and

stunning them for 1 second.

Urgot will stop upon hitting an enemy

flinging them to the location 100 units behind him, though not through terrain.

Purge can be cast during the dash. 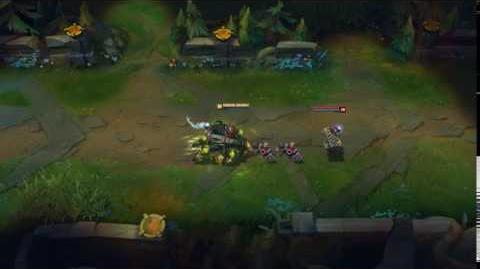 Active: Urgot fires a chem-drill in the target direction that impales the first enemy champion hit, dealing physical damage and leashing them for 4 seconds, during which they're

25% of their maximum health, and does so automatically if the chem-drill would kill the target, the ability is cast again while the target was above the threshold and is then brought within it, or the target is within the threshold at the end of the duration.

Recast - Mercy: Urgot launches chains at the leashed target, then

channels for 1.5 seconds once they latch on. During this time, he reels them toward him,

revealing them, rendering them

untargetable, and preventing them from taking damage from other sources. If the target is near Urgot when the chains connect, they are pushed up to 1000 units away based on their proximity to him. This channel cannot be

Upon completing the channel, the target is

executed. If the execution is successful, he

fears nearby enemies for 1.5 seconds,

Fear Beyond Death's recast can be used while affected by

The end is near.
Info 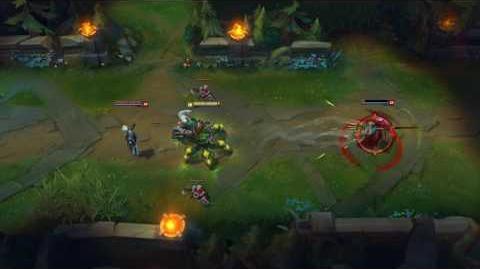 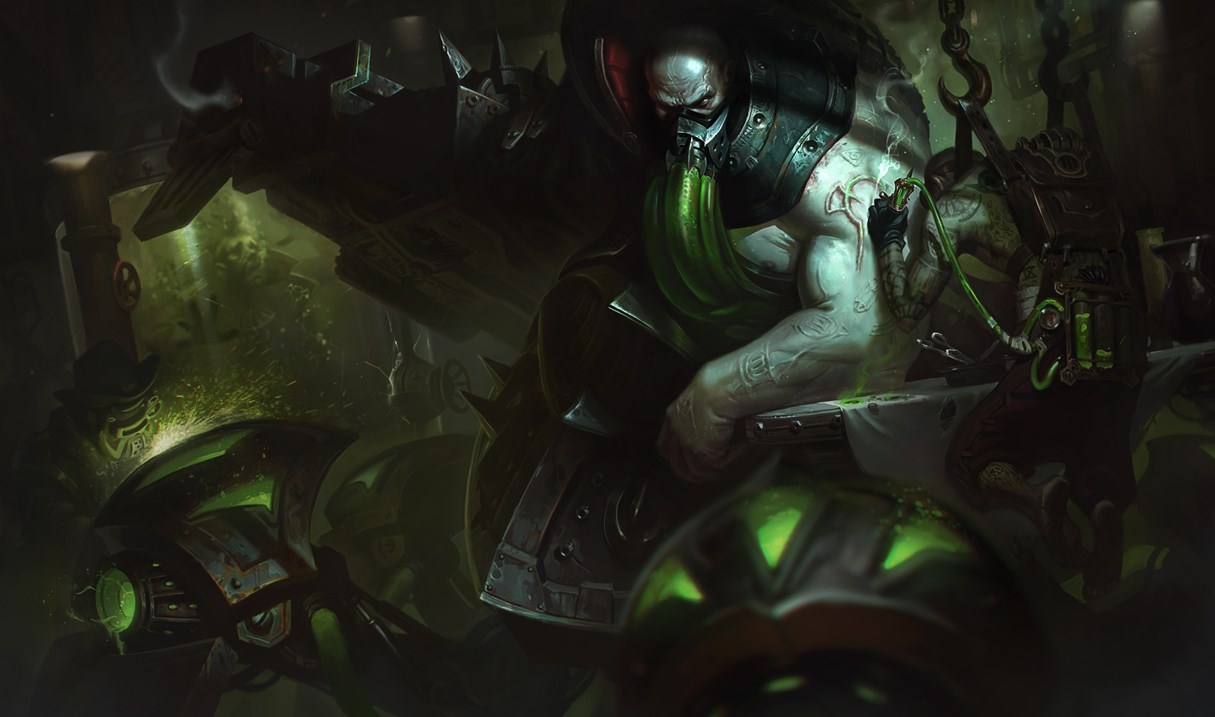 790
24.08.2010
Once a powerful Noxian headsman, Urgot was betrayed by the empire for which he had killed so many. Bound in iron chains, he was forced to learn the true meaning of strength in the Dredge—a prison mine deep beneath Zaun. Emerging in a disaster that spread chaos throughout the city, he now casts an imposing shadow over its criminal underworld. Raising his victims on the very chains that once enslaved him, he will purge his new home of the unworthy, making it a crucible of pain. 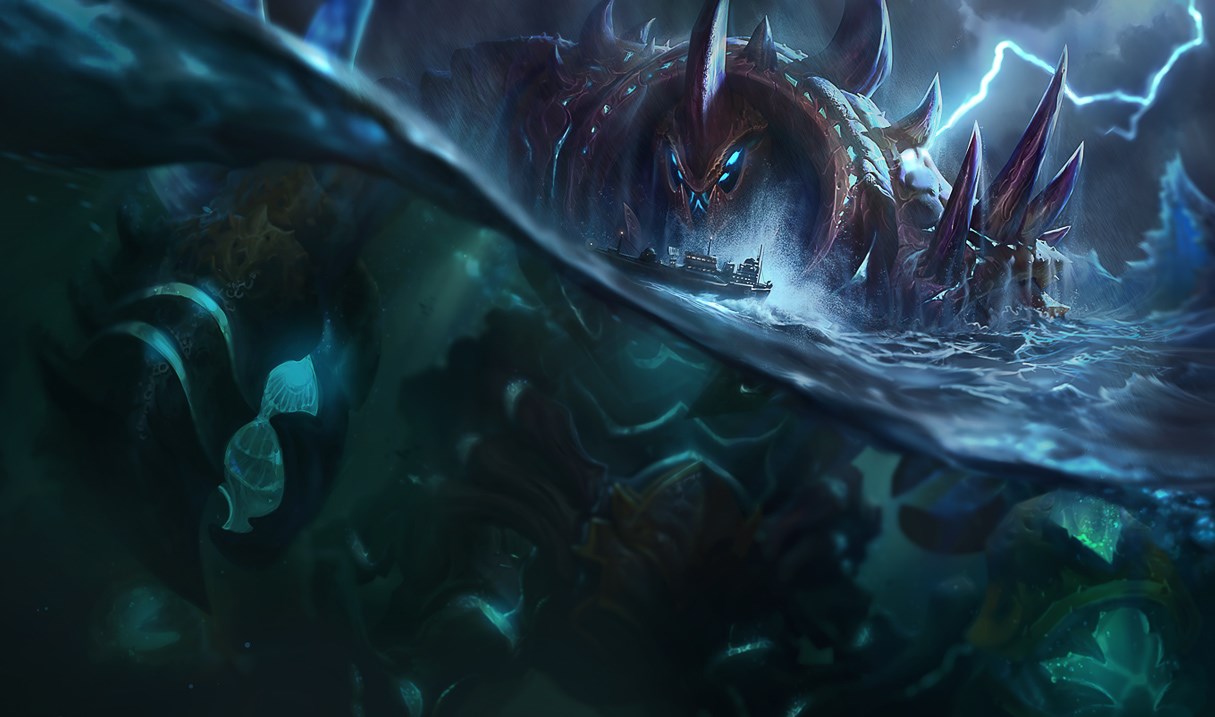 520
24.08.2010
Emerging from the deep sea as the first of the kaiju menace, Crabgot has never been completely defeated by the forces of humanity. The best result when it emerges is to temporarily halt its advance, sending the massive crustacean back into the sea... until it can rise once more. 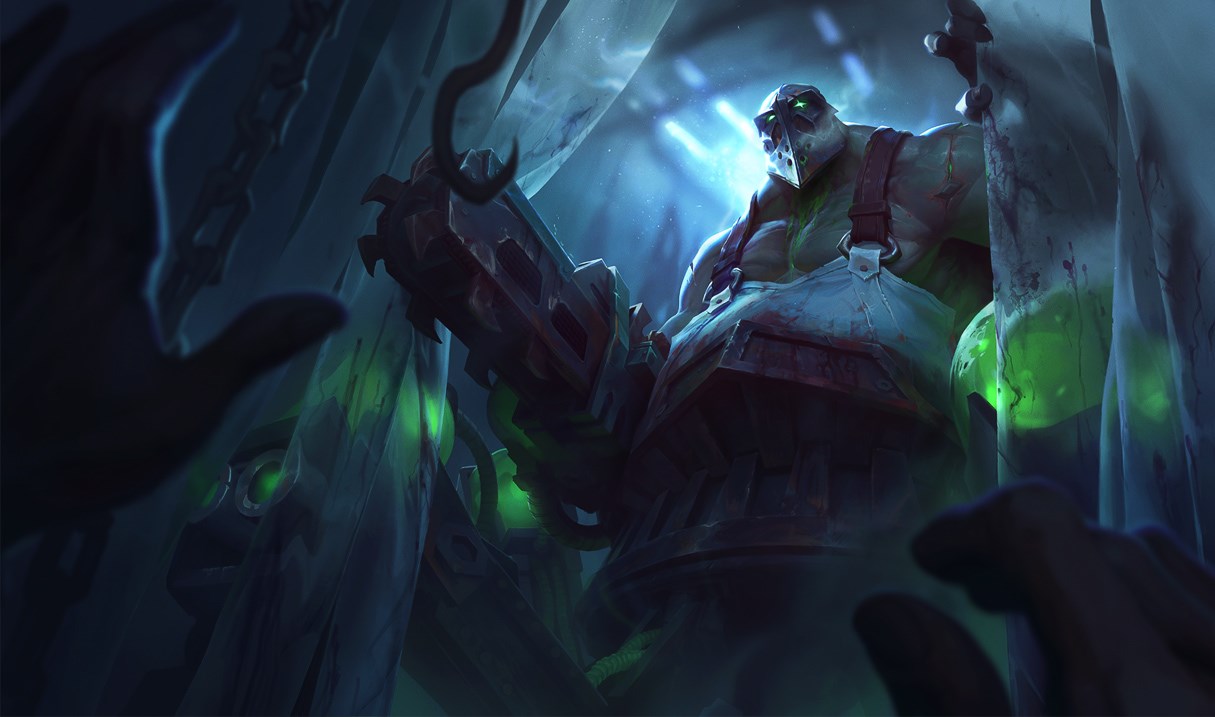 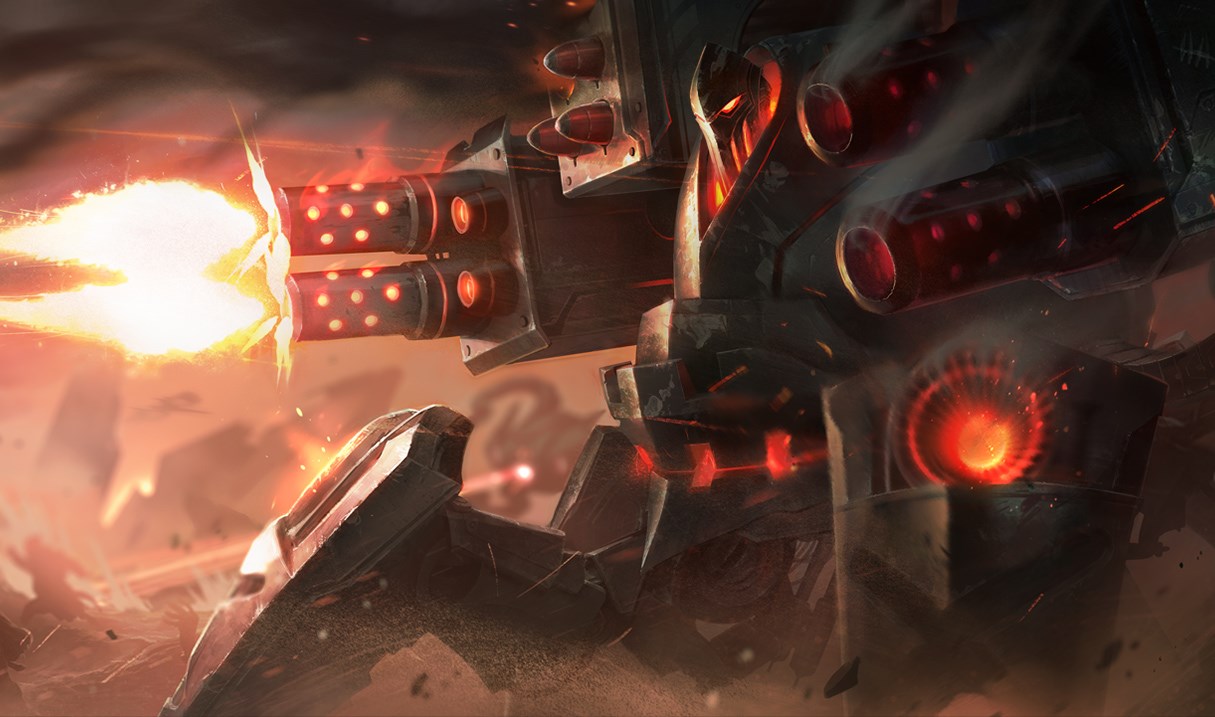 1350
05.03.2012
A titanium juggernaut used to crush pockets of particularly stubborn resistance, the Battlecast Urgot model is rarely seen but widely feared. Its extensive weapons systems are complemented by a massive, flesh-grinding spike mill, which it pulls fleeing opponents into for sheer spectacle. 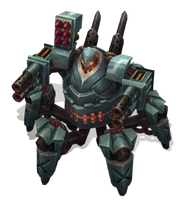 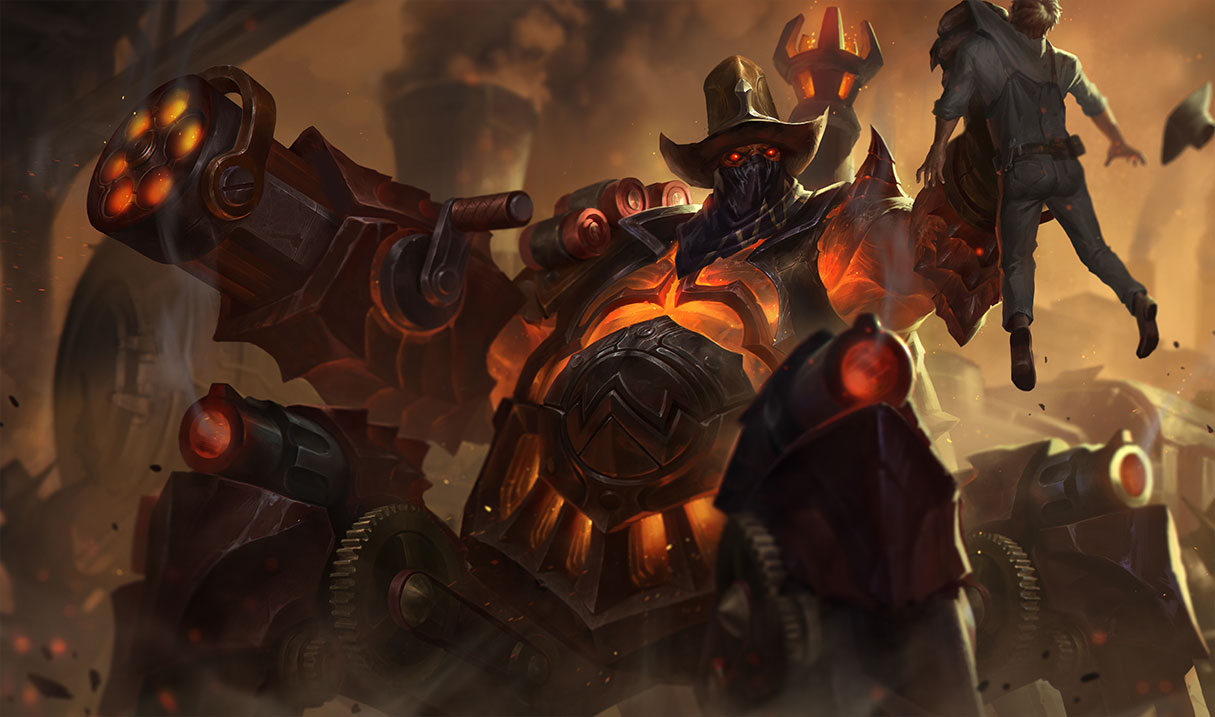 1350
30.08.2018
Jeremiah James was once a famed railroad baron and millionaire industrialist, who bet his own heart on a game of chance… and lost. Left alone in the desert to die, he bargained with a passing devil, trading his immortal soul for a twisted, monstrous body of gears and iron. 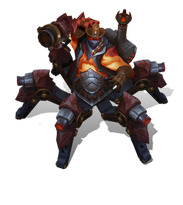 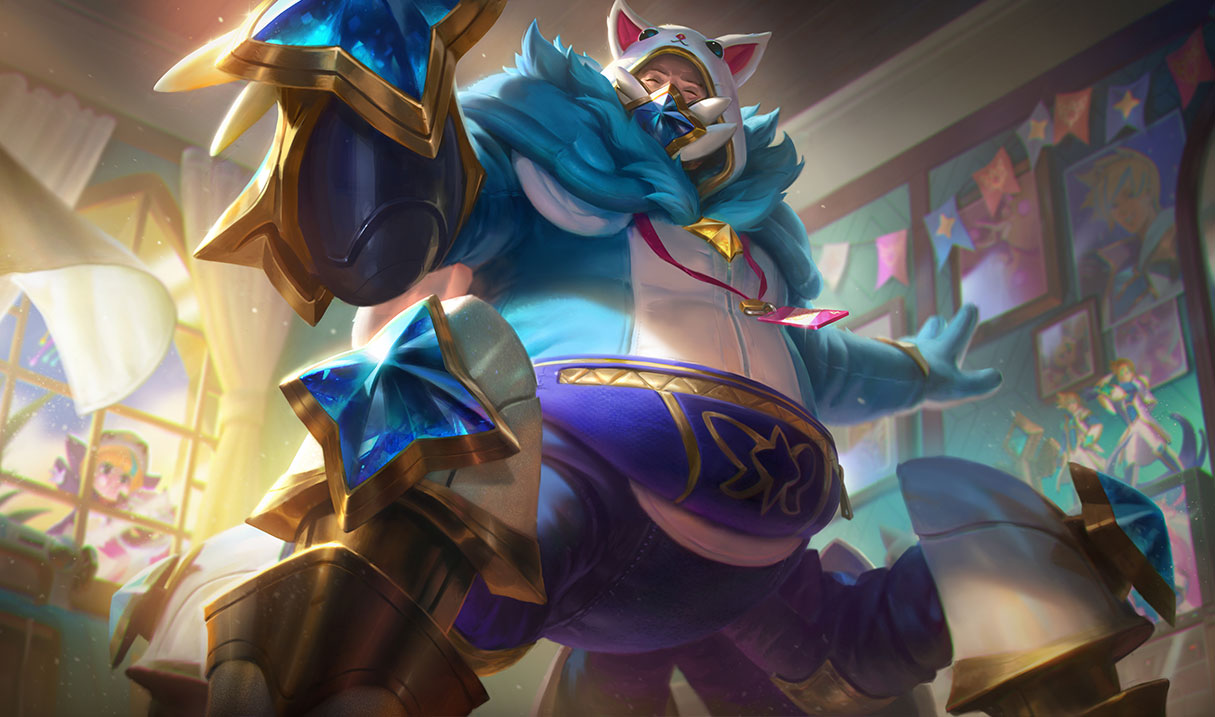 1350
01.04.2020
A Star Guardian superfan of almost impossible proportions, Urgot worked really hard on this outfit for the fan meet, so please be respectful. 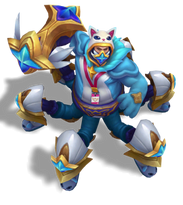