Some stories bring new meaning to the phrase: "cautionary tale," and I'm pretty sure that this one qualifies. Meet Urgot, the Headman's Pride. As you might be able to tell, this bloke's seen a few scrapes in his life and, by this point, is a bit the worse for wear. While he may not be winning any beauty contests, you're really got to admit it, the guy's got style. Unless, of course, you're an arachnophobe. Then the two of you might have issues. Be on the lookout for Urgot as he scuttles his way onto the Field of Justice in the coming patch.[1] 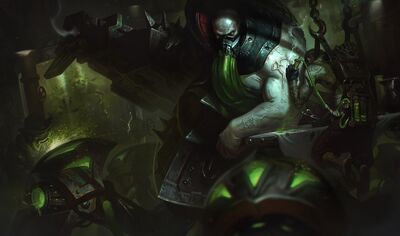 A former Noxian Headsman, Urgot used to think he knew what strength was. Then he was betrayed by Swain and found himself bound in chains, a slave in Zaun's mines. There, he discovered a new form of strength: pain. He revels in the chaos of suffering, knowing that it makes him strong. Now—his body augmented with machinery—he knows that Noxus can never truly be ruled by strength while it is ruled at all. He seeks to destroy the leaders of Zaun, and preaches to those who survive: there are no rulers, only survivors.[2]

Attacking in the direction of one of Urgot's legs causes that leg to combust flames outward, dealing physical damage to enemies in a cone and putting that leg on cooldown. Consecutive hits within a few seconds deal reduced damage.

Fires an explosive charge at the target location, dealing physical damage to nearby enemies and slowing them. Enemy champions struck are locked onto.

Urgot shields himself and rapidly shoots the nearest enemy, prioritizing enemies that are locked onto and triggering Echoing Flames when possible. While shooting, Urgot walks more slowly, but becomes resistant to incoming slows. During this time, Urgot can walk over non-champions and cannot basic attack normally.

Urgot charges in a direction. If he runs into an enemy champion, he'll stop, grabbing and throwing them to the other side of him - damaging and locking onto them.

Non-champions trampled during Urgot's charge take the same damage and are knocked aside.

Urgot fires a hexdrill beacon that impales the first enemy champion struck, locking onto them, dealing physical damage and slowing them.

While impaled, if the target falls below a health threshold, Urgot may re-cast Fear Beyond Death to suppress the target, slowly reeling them in and - when they reach him - executing them. During the re-cast, they are untargetable, and this effect can only be ended by killing Urgot.

If Urgot successfully executes an enemy, he terrifies all nearby enemies.

Urgot is a force of destruction incarnate - an inevitable, unstoppable juggernaut who shoots, pulls, and grinds his opponents to their deaths. His strength is evident, and his foes should never underestimate him. Running away is always an option.

Urgot wants to go toe-to-toe with enemy; his knee cannons can wreak havoc once he's up close and can unleash them all. Find the weakness of your enemies - or create it - and then wrap them up in chains and finish them off. Forget the nimble, elusive enemies; they are weak and prefer flight to combat. But anybody who dares to fight you head on? Show them true strength. 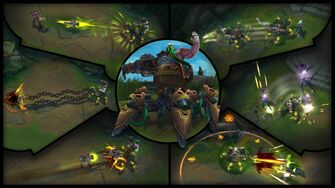 Within the last few years,

Warwick got wolfier. Meanwhile, one of League's most memed men sat in the shadows, watching and waiting for his time on the operating table. It was there he'd be fitted with 50% more legs, 5/7 more depth and relatability, and 100% more shotgun knees.

Urgot was ready to rise from the slab.

The Makings of a Supervillain

Urgot's old identity was defined by ugliness. He was League's grotesque guy, and he was probably proud of it. But that's not enough to make for a compelling character. Urgot needed to be more... human. "From the beginning, we tried to understand why Urgot did what he did," says narrative writer David "Interlocutioner" Slagle. "This grounded him in being a person, not just a kill machine." 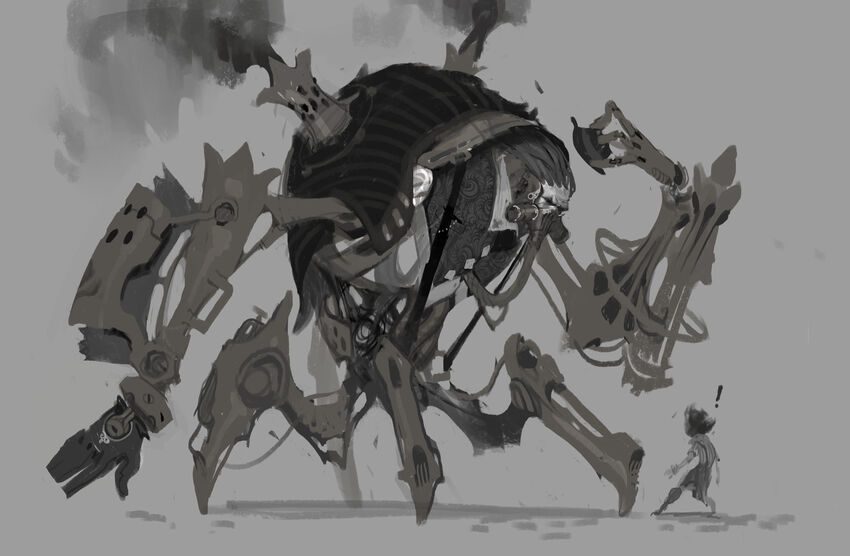 New Urgot was once a Noxian executioner who believed strength should determine who rules—an ideal he personally pursued by chopping people's heads off. But one day, Swain sent Urgot on a mission to Zaun which was actually a setup. Betrayed and defeated, Urgot was dragged deep into the chemtech mines. It was in that hellish prison he witnessed the constant struggle for survival and heard incredible stories of Zaun's technology. To Urgot, this place was a real testament to strength.

"He thinks Zaun is everything Noxus said it was, and Noxus is just politics," Interlocutioner says.

In Zaun, only the worthy survive, and Urgot believes he's worthy enough not just to survive, but to thrive. And when someone willing to go to any length for strength suddenly has access to body augmentations, the decision is simple logic: Is this shotgun knee stronger than my normal knee? Yes? Okay, replace it. Urgot's power grew with every augmentation, and he soon seized control of the prison and busted the joint wide open.

Once freed, Urgot set out to eliminate all of Zaun's chem barons. It's not like he's a vigilante seeking justice (although he may think otherwise). To Urgot, these chem barons are interfering with the natural chaos of survival by introducing law to the lawless, albeit illegally. Their power comes from money and influence, not individual strength, and Urgot is not okay with that. For every baron he tracks down and slaughters, he chemically burns their insignia into his flesh as a memento. It's not long before Urgot's name is recognized across the city; followers continuously flock to his side, attracted to power like moths to a flame.

Some of Urgot's earliest inspirations actually came from Batman villains, who are often over-the-top in both theatrics and philosophy. Yet when you examine their character arcs, you can understand how and why they ended up the way they are—which was the goal for Urgot. "Characters like the Penguin and the Joker are dark," illustrator Victor "3rdColossus" Maury says, "but their backstories and theatricality make them iconic and entertaining."

Like many Batman villains, Urgot loves toying with his victims, and his deranged playfulness and sharp intellect make him more than just a brute. For a while, Urgot was also extra theatrical in-game. His taunt was a minute-long monologue that only ended if he was attacked, but that got old really fast. Perhaps even more dramatic was when he'd whip out an organ during his ult, playing a lovely tune and monologuing at you as you were whirled into your doom. Sadly, this didn't make it because the duration of his ult was cut too short during development. 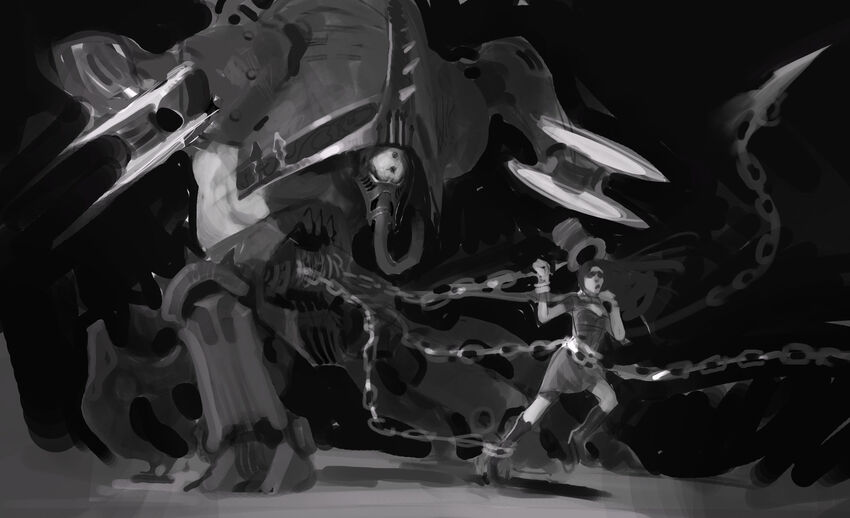 The reason OG Urgot had mechanized legs was because he was chopped in half by Garen and literally needed a new lower body. Updated Urgot left Noxus in one piece and didn't need all those legs anymore, but an Urgot with human legs didn't seem like an Urgot at all. "I remember us saying, 'Man, it'd be great if he could actually find a way to use those legs in-game,'" game designer David "RiotRepertoir" Capurro says.

Then it happened. "I was sitting in a meeting, thinking about Urgot," RiotRepertoir says, "and I was like, 'Oh, what if each leg had a separate cooldown, and they stomped people?'" But with only four legs, each quadrant Urgot could stomp would be too big and feel too clunky. So instead of four legs, Urgot needed six legs.

"Crazy as it is, this idea really defined the character going forward," 3rdColossus says.

This stomping didn't last long before it was replaced by flamethrower knees—the predecessor to the shotgun knees. "By the way, I couldn't believe people were so hyped about this," RiotRepertoir says. "I was like, 'Are you sure? You're saying the words 'shotgun knees,' and you're saying it's great, and I was like…huh?' Really, I was excited and a little relieved players also seemed to like it."

Urgot's six legs were a major breakthrough in development, but that doesn't mean they were easy to design. "I've been working on champions for six years," art lead Larry "The Bravo Ray" Ray says, "and Urgot's legs had to be the most challenging thing I've ever worked on." Whatever mechanical parts Urgot used in-game needed to make sense. There was no room for random metallic bits that didn't help him move or bend or mess shit up. Plus, all of his augmented parts needed to be things he could actually find in the depths of Zaun—so no lasers or flamethrowers or other fancy things.

"Larry would come in and be like, 'Alright guys, today I engineered this part of the machine,'" says RiotRepertoir. "He'd bring in new sets of schematics every day."

Old Urgot's deformed, bloated body coupled with his violent one-track mind made him feel really inhuman, which was part of the reason he was so difficult to relate to. One of the goals for Urgot's new design was for his humanity to shine through, particularly in his intelligent eyes and expressive face. His skin may be sickly pale, with rotting flesh where it meshes with metal, and he may be half mechanized, but he is still distinctly human. And when you stare into his eyes as he slowly dismembers you, you'll know this is not a monster driven by blind bloodlust. This is a calculated, purposeful, and merciless visionary.

Retrieved from "https://leagueoflegends.fandom.com/wiki/Urgot/Development?oldid=3089006"
Community content is available under CC-BY-SA unless otherwise noted.