Fighter
Untitled fighting game, also referred to internally as Project L, is an upcoming fighter game developed by Riot Games Inc. and Radiant Entertainment, set within the world of

This section is largely speculation from promotional media.

In footage seen, there is 4 bars in the same place as Rising Thunder's 3 Special move cooldowns + Super move cooldown, so this game might have the same inputs for its special moves, which would also reflect

League of Legends' champion abilities - usually 3 basic abilities, and an ultimate ability. It wouldn't be unlikely that this game has passive abilities as well.

When a character is being juggled (comboed in the air) in this game, there's a counter of how many consecutive hits occurred in the air, below the combo meter. This looks near identical to Rising Thunder's juggle counter, except without a number stating the maximum juggle. In Rising Thunder, when this counter was filled up, the player being juggled became invincible briefly and fell to the ground. Something similar was seen in the gameplay where this meter was seen, where Katarina fell towards the ground after being shot in the air by Jinx, but this could be a completely different mechanic in play.

There is a lot of evidence that this game will have some form of high-quality netcode, likely GGPO or proprietary rollback netcode. There is a large body of supporting evidence:

Not all champions from

League of Legends will be in Project L. Champions may have unique abilities to fit the gameplay style. The champions seen to appear in the game so far are[1]:

Ahri does not seem to possess her

Orb in her idle stance, unlike her appearances in

), but better reflecting her canonical appearances.

League of Legends - her minigun

Pow-Pow, and her rocket launcher 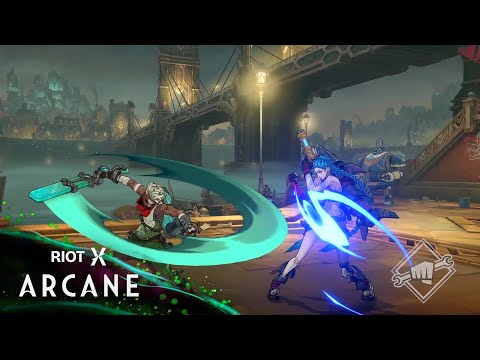