Card sharks everywhere will be excited to know that

Twisted Fate is receiving a Visual Upgrade in the upcoming patch. The Card Master is a classic champion that remains one of the most popular around the world. Fate has smiled upon everyone's favorite gambler - he's getting a new model as well as revamped textures, sound effects, spell effects, and voice over. Each one of Twisted Fate's skins is being adapted to his higher quality model, so you'll see upgrades across the board. He's also got some sexy new moves inspired by the latest dance craze. 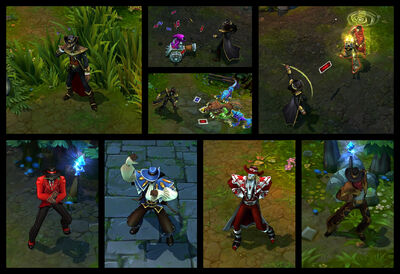 Legends of the Field - Login Screen

Act 2 Above the Abyss

Retrieved from "https://leagueoflegends.fandom.com/wiki/Twisted_Fate/Development?oldid=3075969"
Community content is available under CC-BY-SA unless otherwise noted.