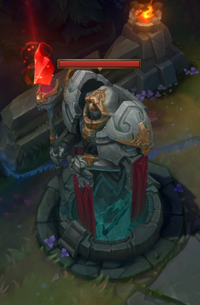 physical damage. Their shots travel at a speed of 1200. They are normally

immune to all forms of

stasis. If a turret is destroyed while one of its shots is in mid-flight, that shot doesn't deal damage.

Heroic Charge, interact with this terrain for both functional and destroyed turrets.

neutral monsters do not deactivate this effect.

True Sight: Can see all units and traps (including those in

stealth) within 1200 range, unless the direct line of vision is obstructed (e.g. by terrain).

Turrets attack the first enemy unit that comes into their range and continue attacking that unit until it dies, leaves the attack range of the turret, or stops being targetable. When the current target is lost for whatever reason, the turret selects a new target. If several targets are in range, the turret chooses its new target following this priority list:

Aura effects do not affect turrets. Turrets are not valid targets to most champion abilities. Exceptions are listed in the scroll box below. Basic attacks don't apply health based damage modifiers or critical strikes, unless otherwise stated. They do, however, apply

ability power. If a champion has ability power greater than double the amount of their bonus attack damage, the attack's damage converts from 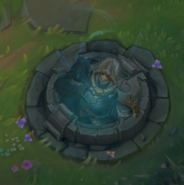 Masters Challenge Season 5
Add a photo to this gallery