There's Something in the Trees of Summoner's Rift

There's something lurking in the trees of Summoner's Rift. Something so vile, so menacing, and so terrifying that even the bravest of champions dare not set foot in the jungle. It's been said that wolves, golems, and dragons have been going missing, and that even the dreaded Baron Nashor fears for his life. While no one is sure exactly who or what is responsible for the disappearances, a strange figure has been spotted moving ever so methodically through the woods. We manage to capture this photograph of him before he disappeared again into the brush. 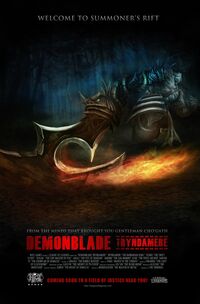 This week, three champions of the League disappeared in the woods near Summoners Rift amid whispers of a powerful artifact had been spotted. These intrepid treasure hunters struck off into the jungle, disregarding rumors of strange happenings, abnormal behavior among the wildlife, and a mysterious presence so terrifying that even the most courageous dare not speak its name.

Today, after a search party was dispatched, their remains were found! This is their story!

Cut down your enemies with Sultan Tryndamere

For the launch of League of Legends in Turkey, Tryndamere is shedding his barbarian armor for a more traditional Turkish wardrobe. Sultan Tryndamere comes equipped with Turkish garb, a new model, a new critical hit animation, and a Turkish-inspired, ornate scimitar that kicks up dust as it drags on the ground. Best of all, Sultan Tryndamere has meticulously trimmed his moustache for a more distinguished rampage.

Don't miss this opportunity to save on your new scimitar before you charge into battle with Sultan Tryndamere!

Retrieved from "https://leagueoflegends.fandom.com/wiki/Tryndamere/Development?oldid=3136387"
Community content is available under CC-BY-SA unless otherwise noted.