< Tristana
View source
watch 02:56
Raise a Floppa - The Loop
Do you like this video?
Play Sound 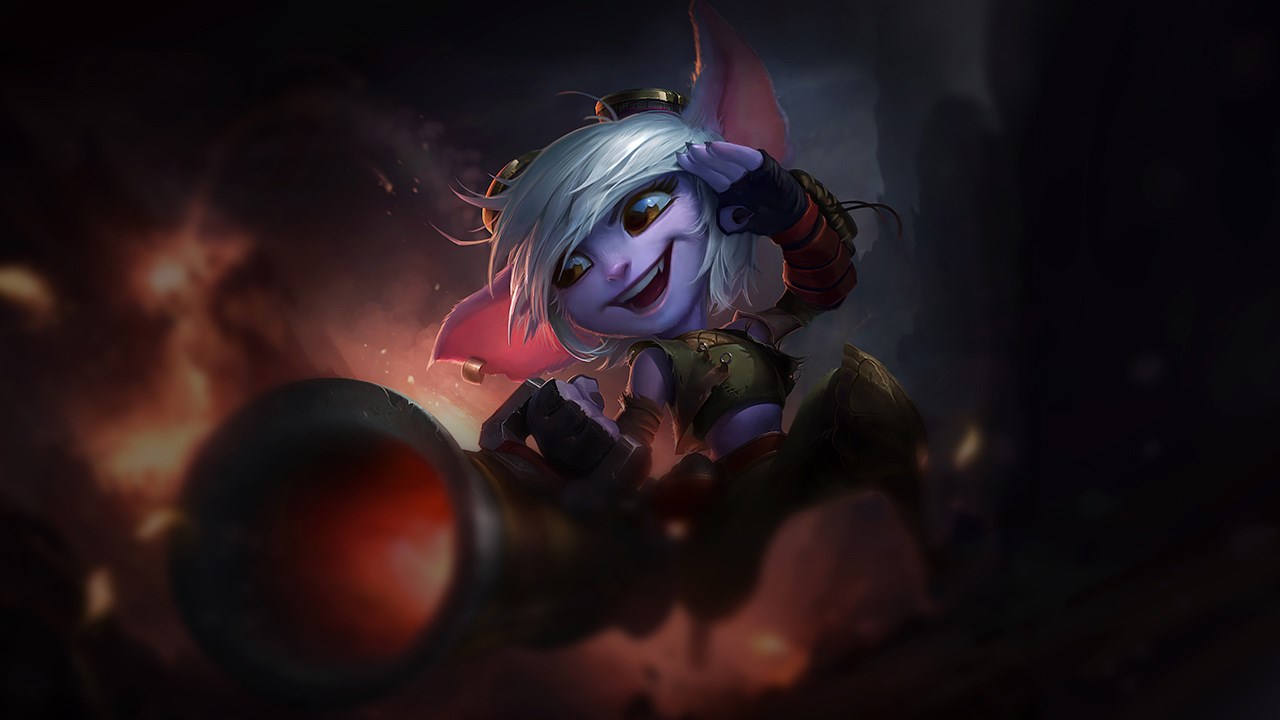 Tristana is a champion in League of Legends.[1]

jumps to the target location, dealing magic damage to all nearby enemies on impact and

Rocket Jump will cast at max range if cast beyond that.

Active: Tristana launches an explosive charge at the target enemy, including

turrets, which upon arrival attaches to them for 4 seconds. Afterwards, the charge detonates, dealing physical damage to nearby enemies, including turrets. The explosion radius is doubled when the charge is placed on a turret.

on-hit and abilities against the target increase Explosive Charge's damage by 30%, stacking up to 4 times for a maximum 120% increase, upon which the charge also detonates instantly.
The charge's total damage is additionally increased by 0% − 33.3% (based on critical strike chance).

Buster Shot is used to apply the last stack, the detonation will instead be delayed until the end of the

knock back or the 4 seconds expire.

Tristana will attempt to basic attack the target afterwards.

Active: Tristana fires a massive cannonball at the target enemy that upon arrival deals magic damage to them and

stuns all enemies around them, including the target, for up-to 0.75 seconds, during which they are 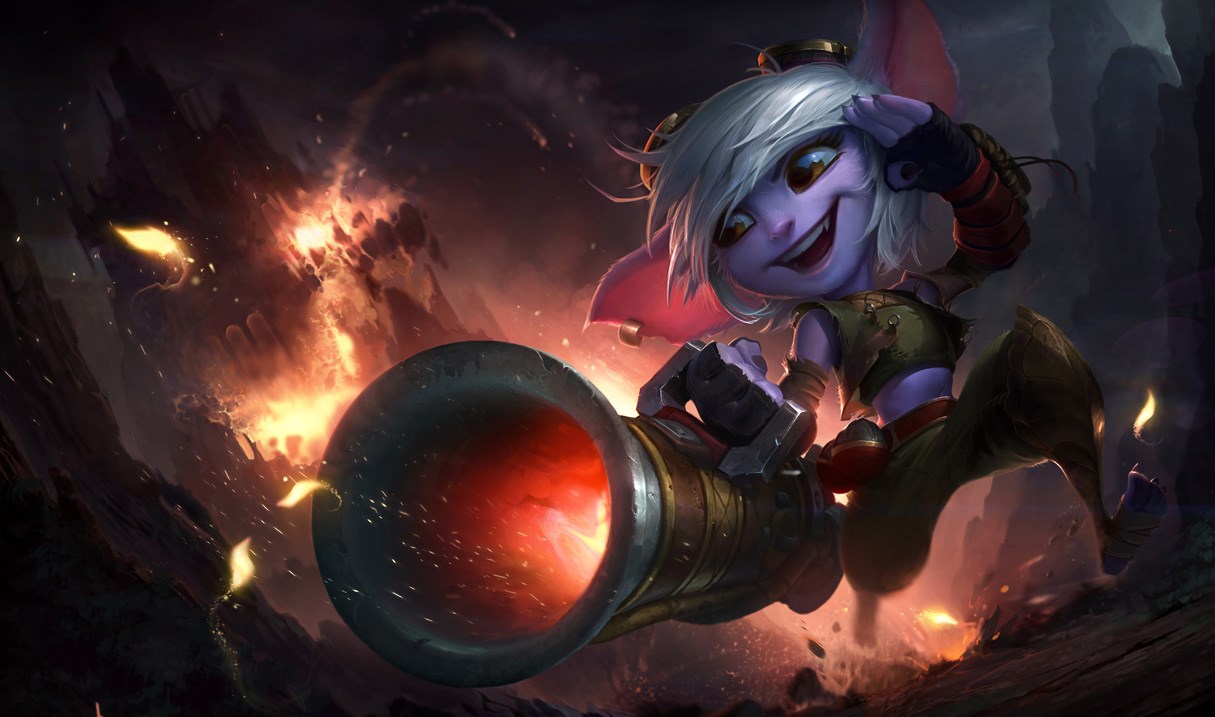 585
21.02.2009
While many other yordles channel their energy into discovery, invention, or just plain mischief-making, Tristana was always inspired by the adventures of great warriors. She had heard much about Runeterra, its factions, and its wars, and believed her kind could become worthy of legend too. Setting foot in the world for the first time, she took up her trusty cannon Boomer, and now leaps into battle with steadfast courage and optimism. 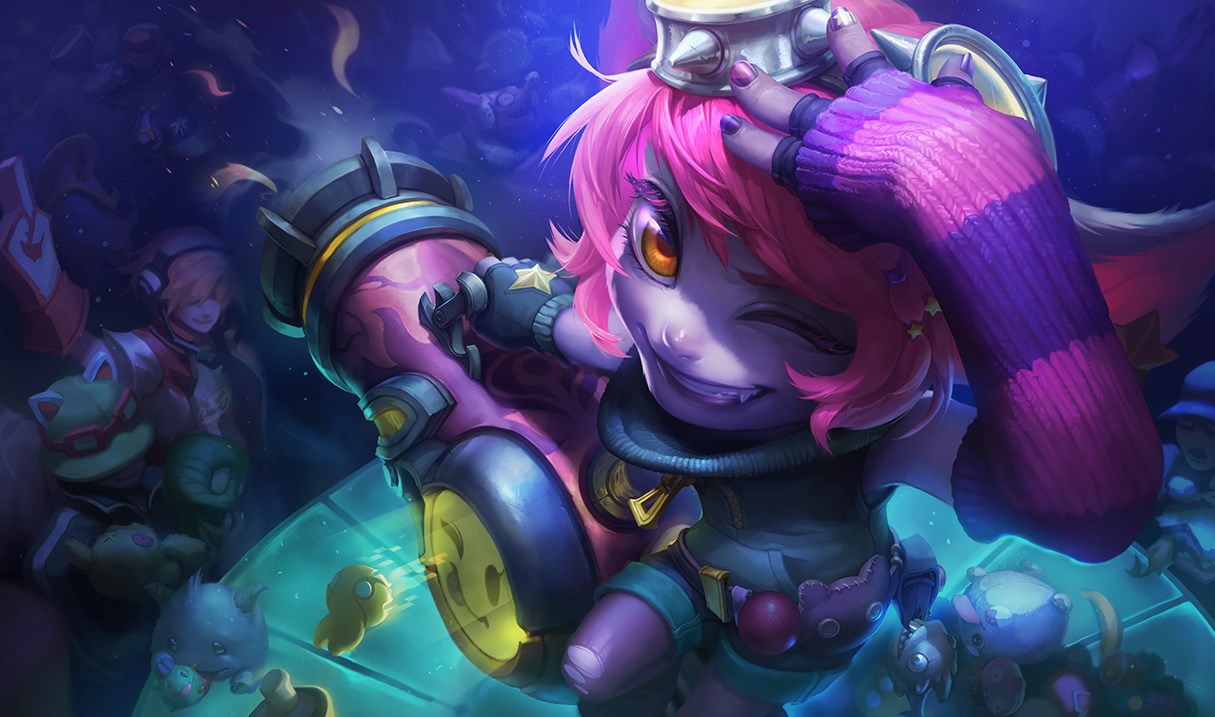 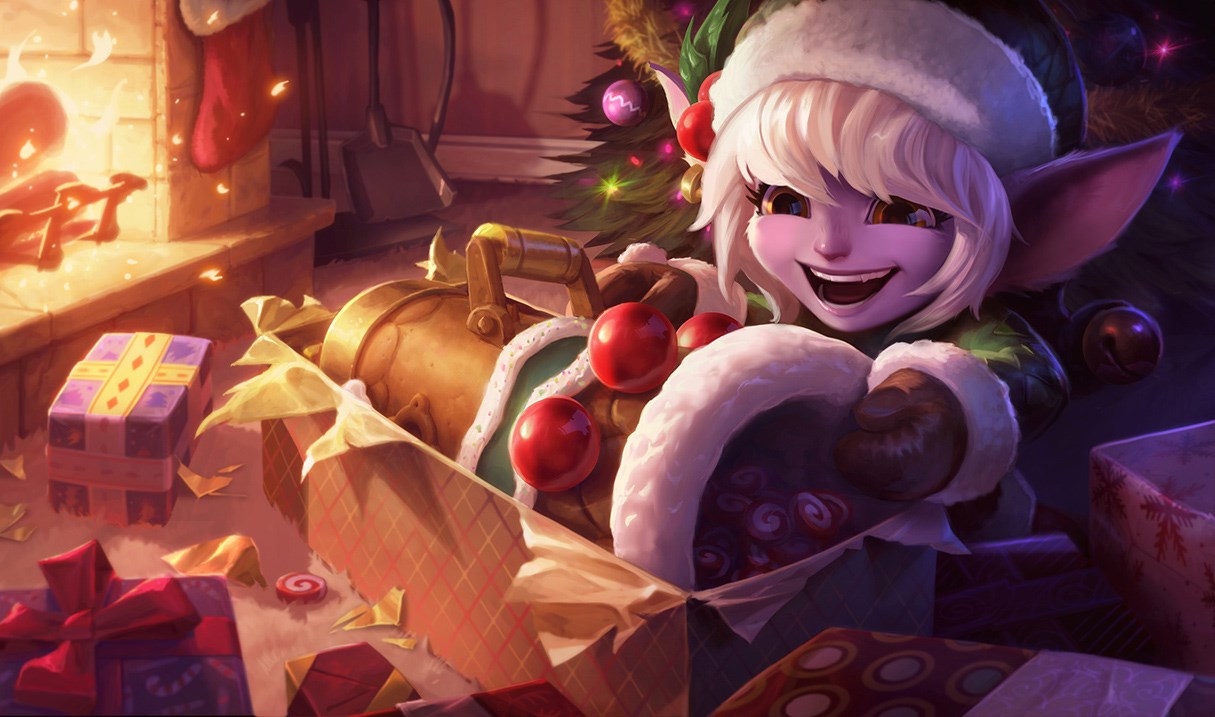 520
31.12.2009
Known for her warm smile and heartfelt sincerity, Tristana's love of holiday cheer brings joy to everyone. She fiercely defends Snowdown festivities with a ferocious barrage of overstuffed presents. 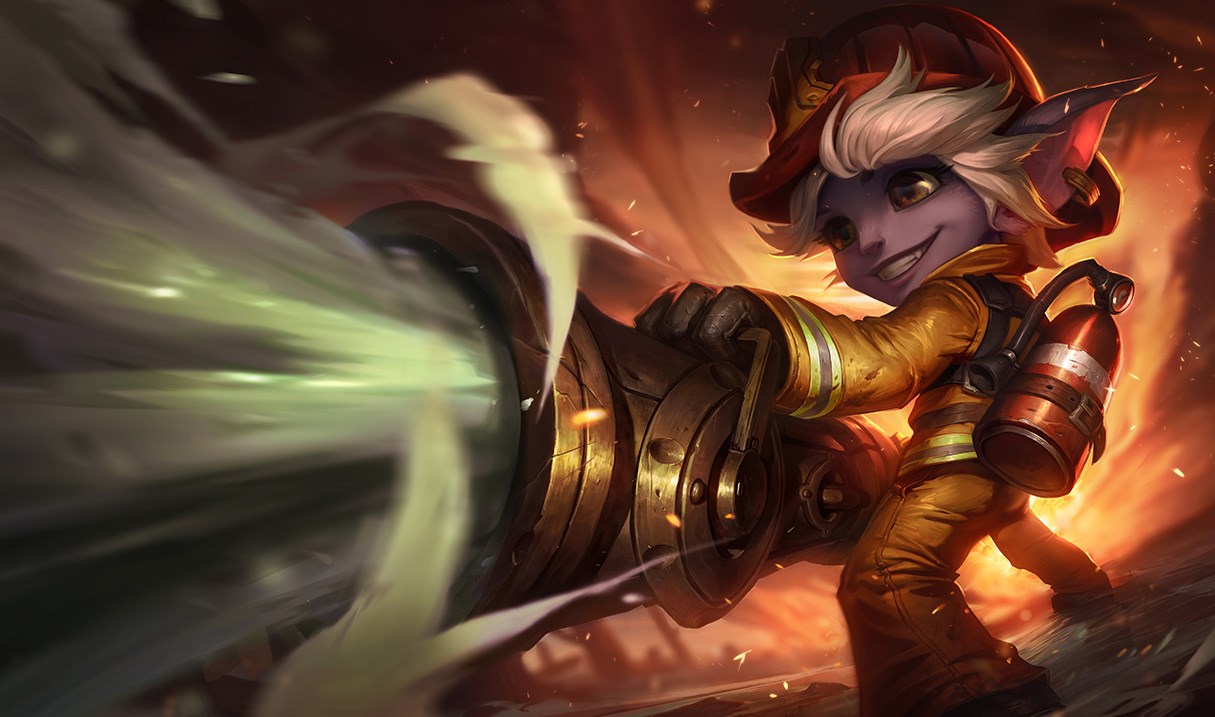 1820
03.06.2010
Recently featured on this year's “most Yordle-y firefighters” calendar, Tristana will gladly leap into the flames regardless of whether anyone is supporting her. Often she'll go despite her support. Firefighter support. She fights fires. 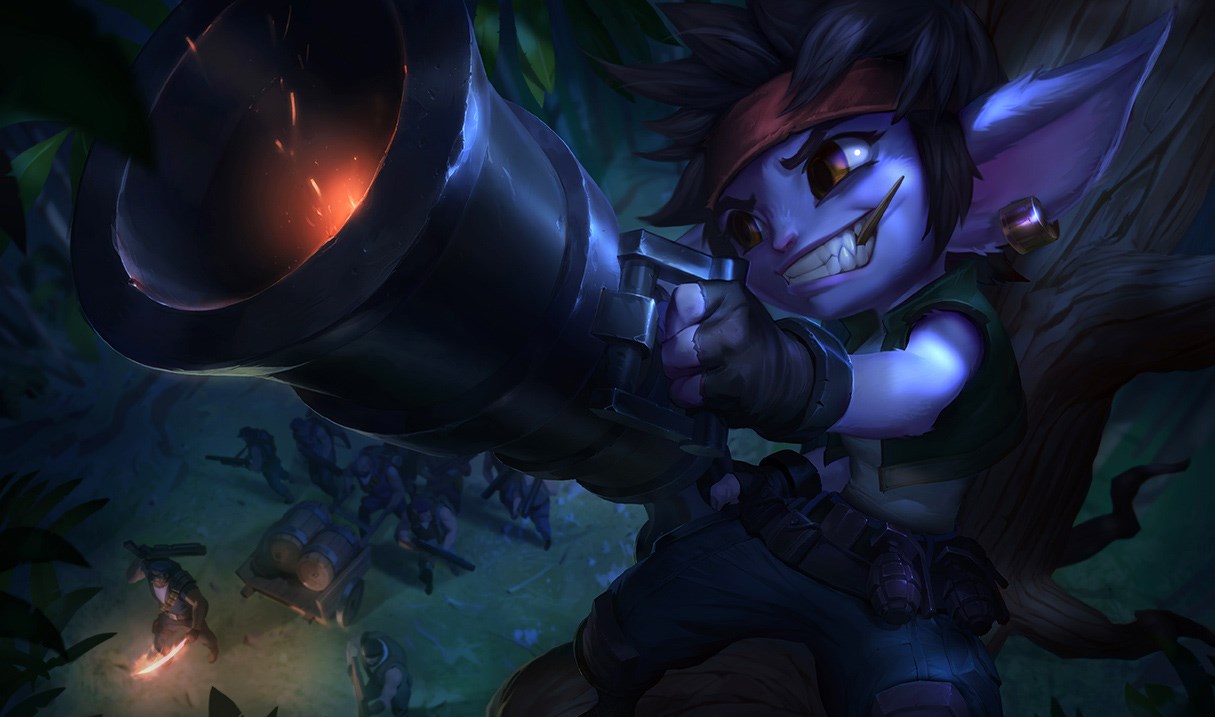 975
10.08.2010
The beauty of guerilla warfare is attacking an enemy that has their guard down, is unfamiliar with the terrain, and doesn't know who—or what—is engaging them. The beauty of being a two foot tall Yordle with a cannon the size of a mastiff hound is that no enemy would ever understand what hit them anyway. 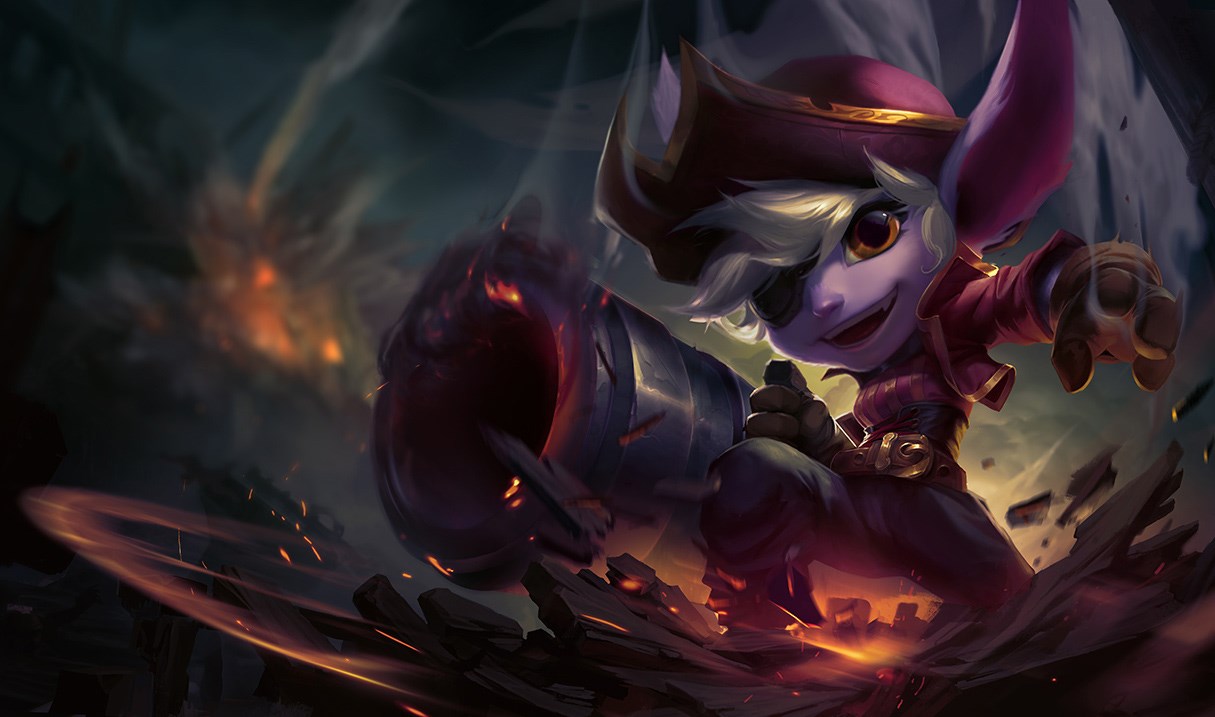 520
27.06.2011
Gunners ahoy! Tristana leaps onto the high seas, sailing for new adventures beyond the Bandle borders. The hat's borrowed (stolen) from a pirate she blasted, and the eyepatch is purely for show. But her take-no-prisoner attitude and trusty cannon gun have sunk more ships than most captains in Bilgewater. 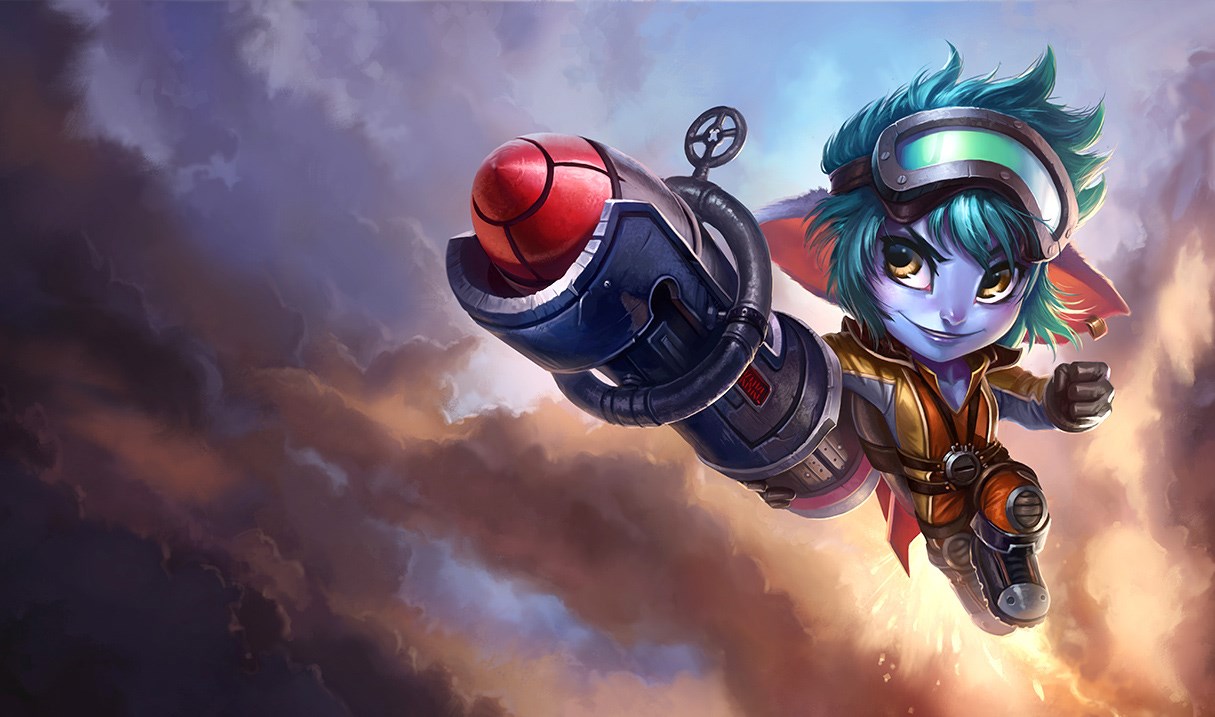 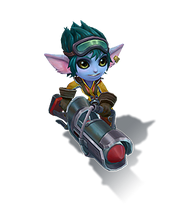 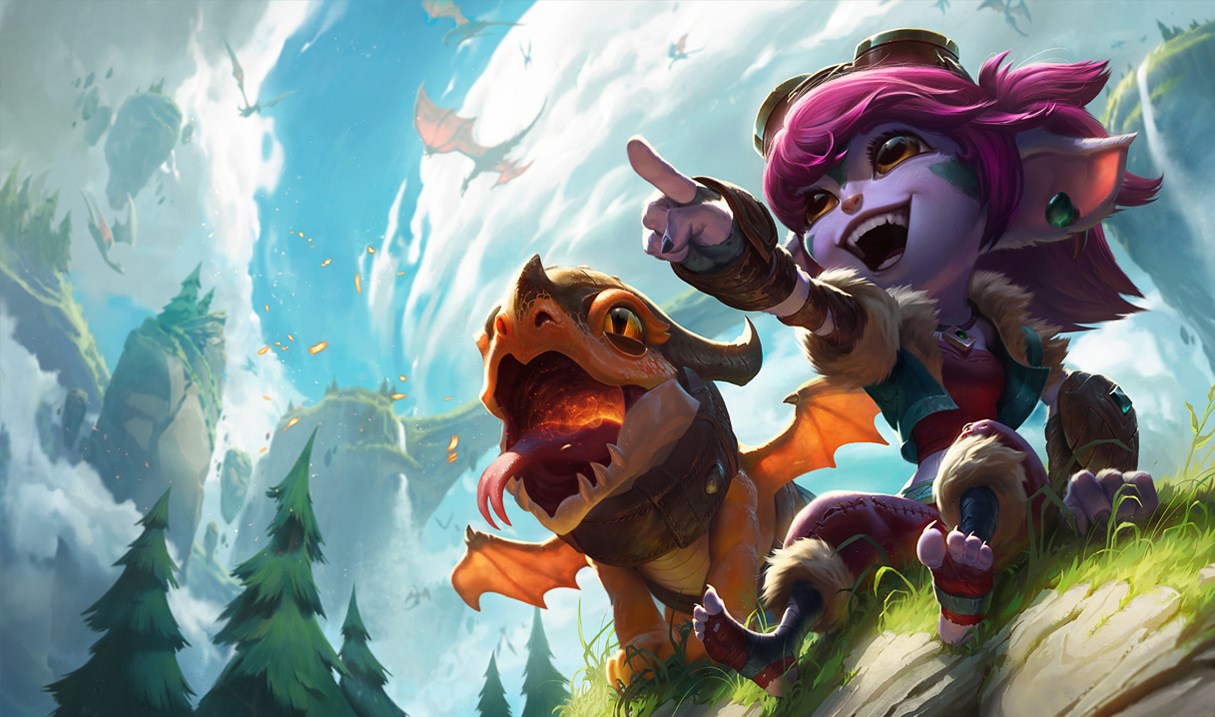 1820
03.12.2015
As the dragonslayers fought a bitter war with their nemeses, Tristana was busy with a draconic matter of her own. Deep in the wooded forests, away from the battles, she busily trained a young dragon—a trying task rewarded with lifelong friendship. 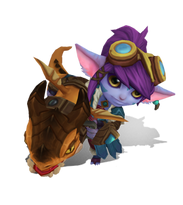 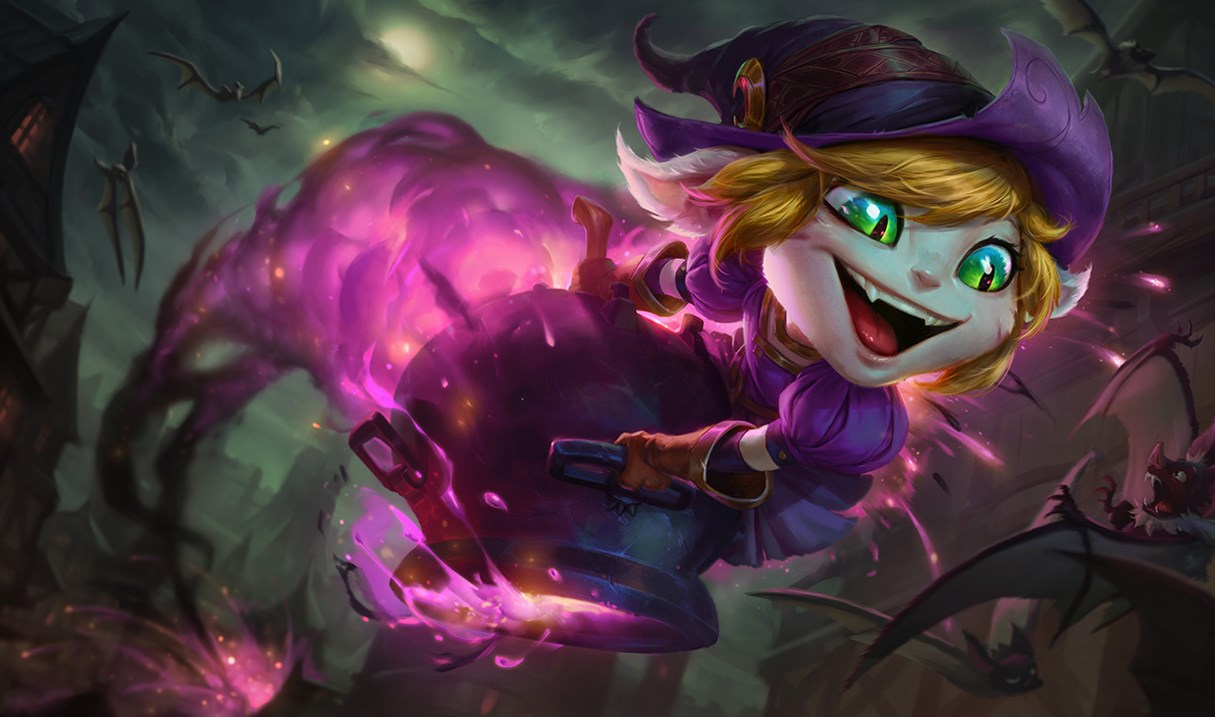 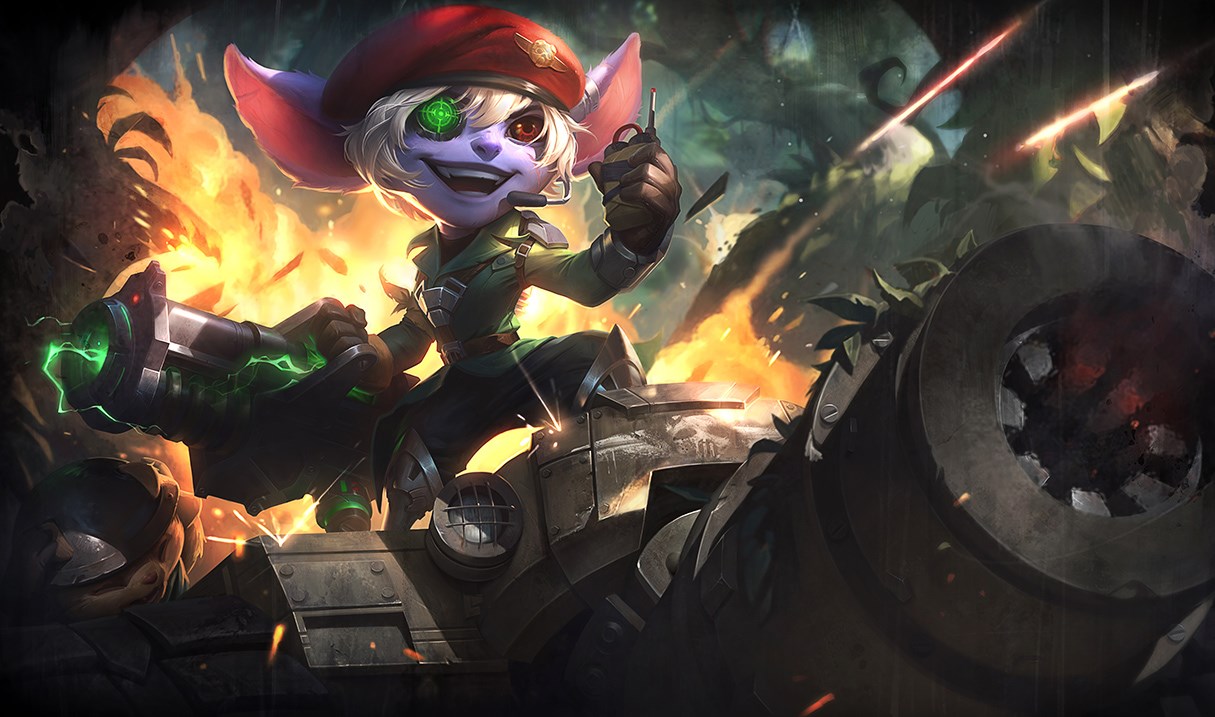 1350
26.07.2017
Commander of Omega Squad, Tristana has made it her policy never to retreat unless she's returning fire the entire way home. She calls it “advancing backwards.” 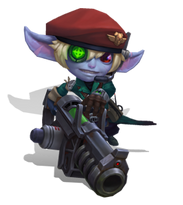 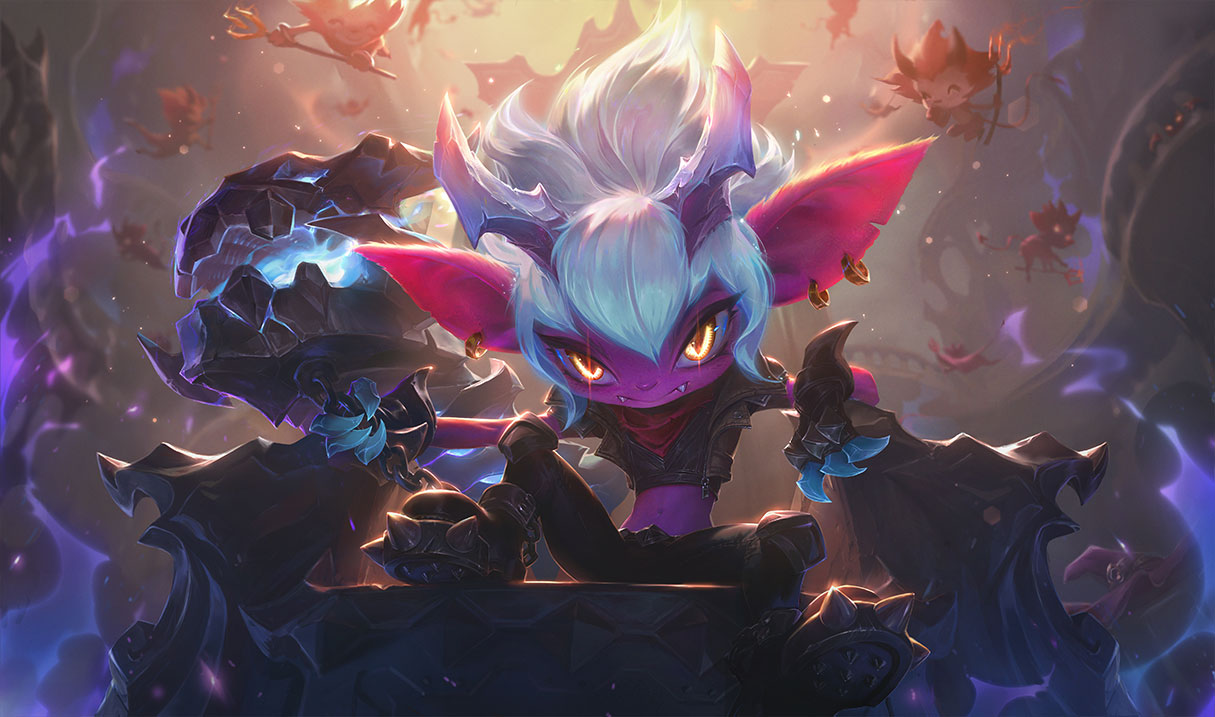 1350
30.05.2019
A witch who is now one of the great queens of Hell, Tristana commands a vast army of lesser demons and rules the twin Aspects of Ruin and Woe. Mortals attempting to invoke her will find a variety of tempting contracts, but signers beware: Tristana's ultimate goal is bathing her signatories—as well as the world—in hellfire. 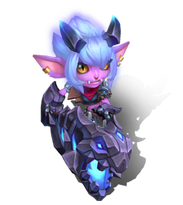 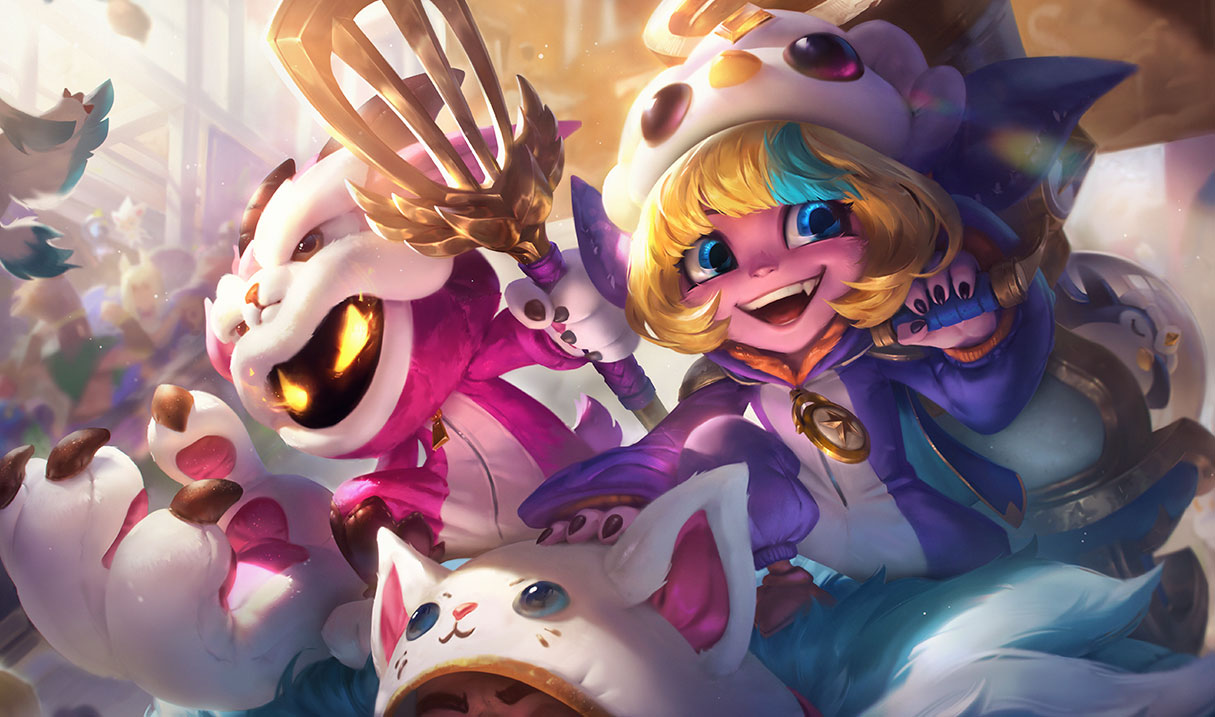 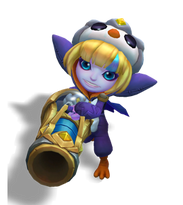 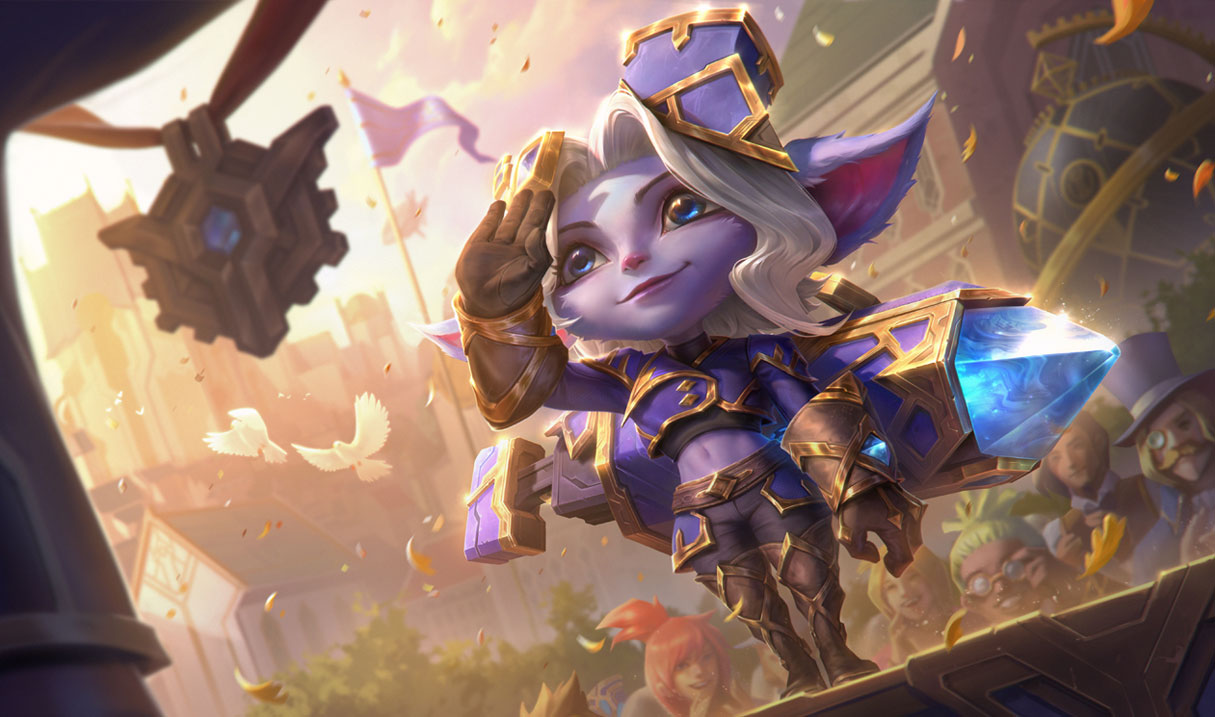 Hextech
View in 3D
Special
09.09.2021
Hex-powered munitions have been around since the early days of hextech innovation, but no one has perfected their use like Tristana. Decorated for her service in protecting the innocent with her Hexcrystal Cannon (Mark III), she stands at the forefront of martial hextechnology as a staunch and noble advocate. 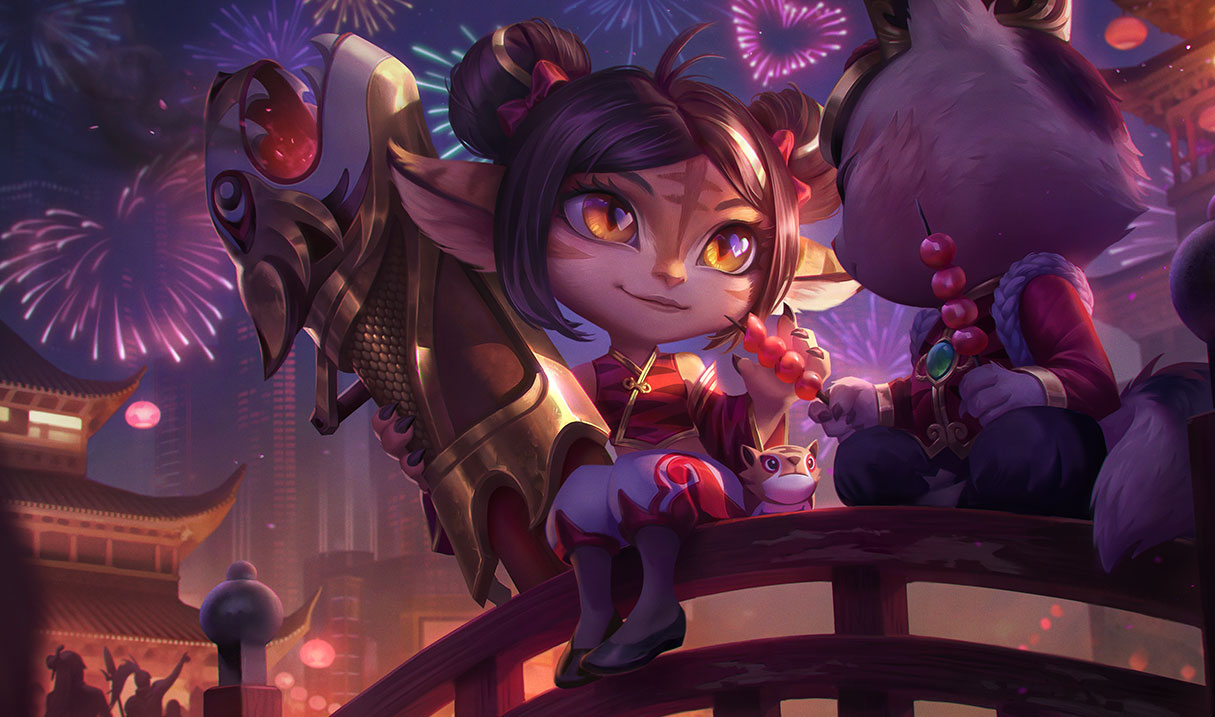 1350
26.01.2022
As the master of fireworks for this year's revel, Tristana has worked hard to create a show the festival goers will never forget. Now that the New Year is here she's excited to sit back and enjoy the night with her friends… but she's saved some of her best explosions for last. 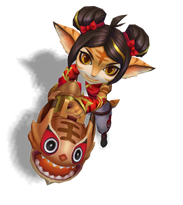