Trannit is a coastal settlement no the shores of the Guardian's Sea and west of Ironwater, in southeastern Noxus. 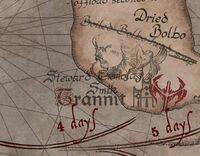 Trannit is currently governed by steward Eranolaj Smik. It primarily exports dried Bolbo fish, which can be made into a local delicacy - boiled Bolbo-head soup.

Bolbos are a type of fish native to the shores of Trannit. They faces have a humanoid like appearance and are best when dried, though boiled Bolbo-head soups are also an option.