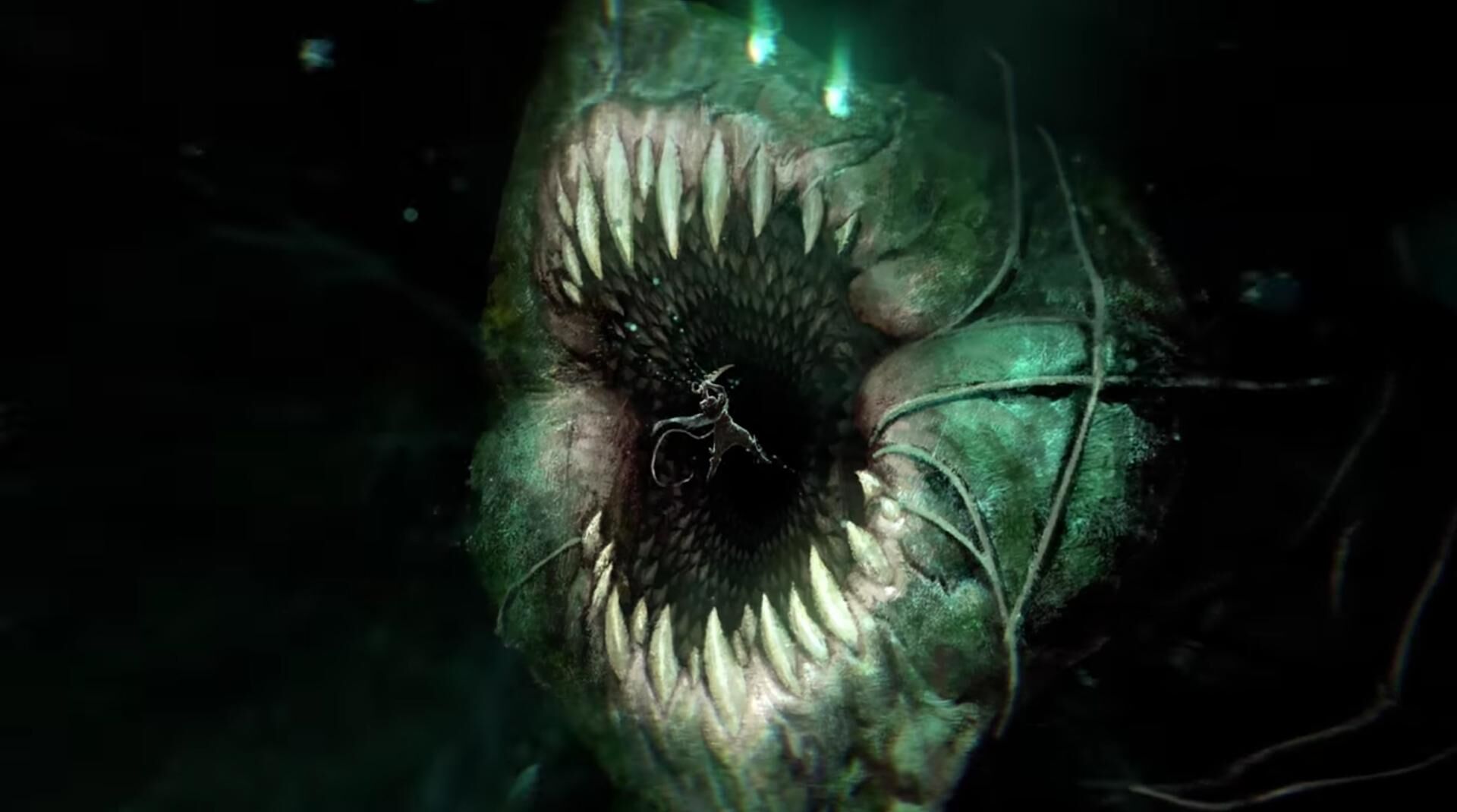 Pyke studies her face once more. Mazier’s dead eyes stab at his mind.

A jaulling vessel. Four-master with tattered sails. Waves the size of mountains.

The tongue was too slick. Eyes stung with sweat. Fingers finding no purchase. Get to open water. Swim, swim...

The jaull’s teeth clamped shut. Then pain. Then darkness.

Ship was gone. So were the eyes.

An able-bodied sailor. Aye. She was there. She cut my line.

Pyke nudges the body with his boot, gazing downward all the while. He nudges her until she reaches the edge of the dock. One more kick, and Mazier is floating. The sharks are quick to feast. Circling. Snapping. The ocean never wastes time.

Gulls shriek, their warbled cries caught on the wind, as Pyke finds Mazier, abled-bodied sailor, on the list. Red ink strikes her name from the parchment.

The last name on the Terror’s crew manifest.

That’s it. No more names, just a lot of red crosses. Where did I get all that ink...?

A feeling gnaws at Pyke. Restless, unsettled, unsatisfied. The churning lurch of bile in his belly. He can’t be done. There were too many of them there, on the decks. Maybe he got the wrong manifest. Maybe it doesn’t even matter.

They let me die. So many hands. So many times.

Another sound. Not gulls. Not waves. Not teeth closing. Not the voice in the back of his mind screaming out “You’re not done!” over and over and over. Not the music he remembers from the swimming city, all those years ago.

It’s a new sound. A real sound. A here-and-now sound.

Pyke looks with his living eye, and sees wooden stairs sagging under heavy bootfalls. A thickset man, walking down toward the moored, bobbing vessels.

He stops when he sees all the blood. His hand disappears into his jacket, pulling a flintlock, keeping the barrel of the gun close to his chest. Ready to aim and fire. Like a bloody idiot.

Pyke steps into the moonlight. The man looks like he’s seen a ghost. The skin around his mouth clams up tighter than a dock banker’s coin-purse. His eyes go wide and quivery, like jellyfish, like calm water catching a breeze.

The flintlock is aimed at Pyke’s head. Then comes the flash and the bang. The shot is true, but it splinters wood because Pyke is no longer where he was.

He’s in the mist.

He falls apart, into salt and drops of water—a fine man to a fine mist. He heard they call him a phantasm. They’re half right.

In those precious few seconds, Pyke is all around him, in the in between, somewhere behind the air itself, studying him. Those fearful eyes, crap-brown. His beard wild and white. Sagging jowls, crooked nose, cracked lips, the way his earlobes are cauliflowered from countless dirty tavern fights.

Pyke needs to be sure. He takes form—he was always a big man, now with the baleful, glowing eye that the sea gifted him, he feels larger still. Tell me your name, he rumbles.

The man didn’t expect anyone to appear behind him. Nobody expects that. Maybe they do in fantasies or nightmares or the stories they tell in bars. But in reality, everyone just craps their pants and falls flat on their face, and this heavyset captain is no rule-breaker on that count. He trips on his own stupid boots, and rolls down the stairs like a sack of tinned victuals.

Pyke takes each step slowly. A Noxian galleon is moored at the dock. Trader ship, or traitor ship? Is there a difference? He guesses not.

You got ‘til I get to the bottom of these steps to tell me what I want to know.

The man wheezes, his wind knocked clear into someone else’s sails. Gasping. A fish on land. Chubby hands reaching out.

White-knuckle grip on the deck rail...

The man tries to stand, but his knee bends the wrong way.

Pyke pauses to consult the manifest, one step from the bottom. All the red marks. All the crossed out names.

Uncrossed. Clear as day. Must have had the paper folded wrong.

Beke Nidd. Yeah, I remember you. You were there.

“I’ve never seen you before! It’s my first night in Bilge—”

People can’t lie with a hookman’s barber lodged in their cheek. They can’t beg or trade facts they don’t have.

Fine tool, the barber-blade. Made of tempered sharkbone. Keener than steel. Sticks in real good, snagging on bone and flesh. Struggling only hooks it deeper, as Beke is learning. His eyes are really afraid now.

Those eyes stab at Pyke’s mind.

The memory rises like a tide, and he opens up to let the waters come crashing through, drowning out Beke’s gurgled pleas.

A jaulling vessel. Four-master with tattered sails. Waves the size of mountains.

Lore and Events
Retrieved from "https://leagueoflegends.fandom.com/wiki/Then,_Teeth?oldid=3088718"
Community content is available under CC-BY-SA unless otherwise noted.