League of Legends Wiki
Register
Don't have an account?
Sign In
Advertisement
in: Lore of Freljord, Short Story, Ornn lore,
and 2 more 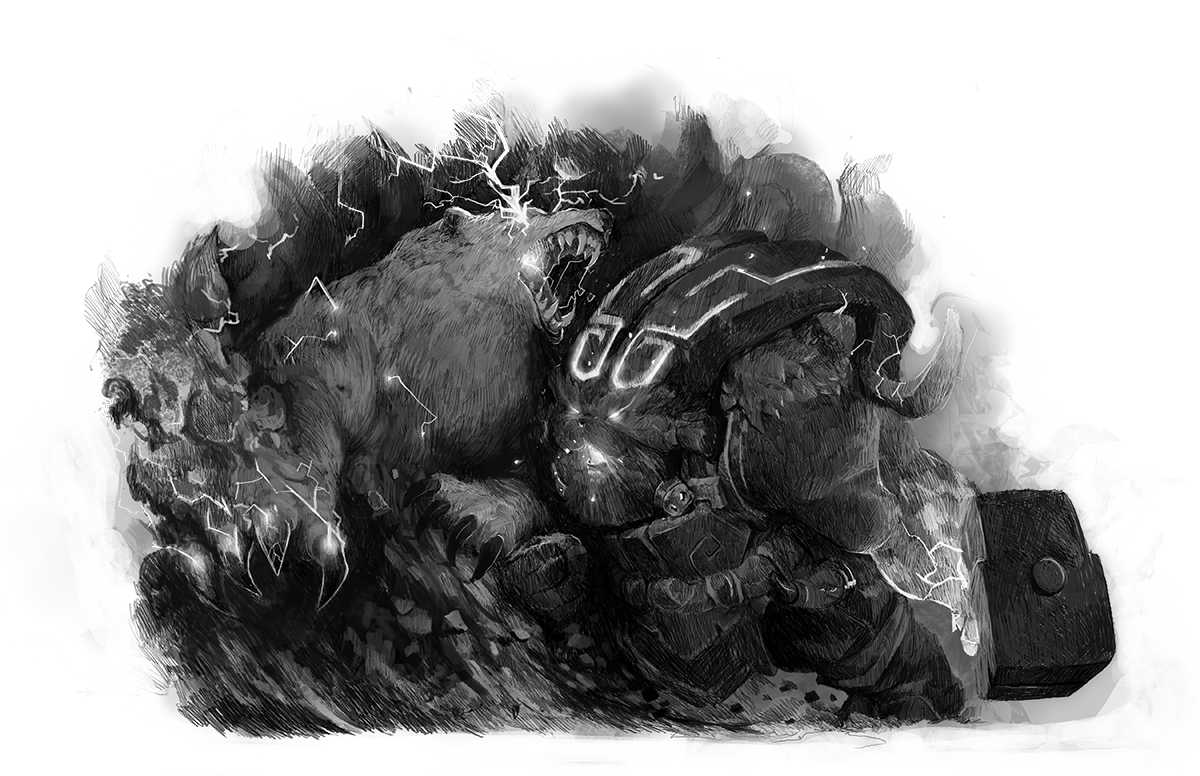 The Winter’s Claw had driven our tribe north, where the land was so harsh that even our warmother Olgavanna shivered through the first night. Our elnuk herd died on the second. At least we had food for the third.

But even that feast was a memory as we climbed the mountain with no peak. Legless Kriek called it “the Half-Mountain of Old Ornn.” Our shaman had lost his mind, but Olgavanna bade us carry the fool. He had convinced her that our survival lay at the source of that mysterious smoke. The rest of us believed we were marching to our doom.

The slopes of the half-mountain were a tortured landscape of black stone. We found the ruins of a forgotten city shown on no map—now just a maze of charred foundations. Kriek, perched atop Boarin’s shoulders, insisted it was once named Hearth-Home.

Dark clouds to the east flashed lightning and winds carried the stench of wet fur and sweet decay. Our scouts did not return. We all knew what this meant, but none of us wished to utter the word “Ursine” aloud.

We climbed until we stood at the edge of a vast crater. Then, Kriek saw the fire. This was odd, because Legless Kriek was also blind.

In the center of that basin was the source of the smoke venting into the sky. Olgavanna reasoned that at least the steep crater walls offered respite from the howling winds, and so we descended into what would likely be our grave. The smoldering terrain proved difficult to navigate, but any halt would mean to bow our heads and accept slaughter. Then we saw the furnace. The domed structure was the only one that looked hand-made. It was crafted like the head of a great ram, with tufts of goat-grass in the spaces between the smooth flagstones. In the ram’s mouth was a flame so bright, we could find it with our eyes closed.

We huddled around it for warmth while Olgavanna laid out the plans for our last stand. It was better to die on our feet, than shivering and huddled in the cold. Most of us were farmers, builders, menders, and few were skilled in combat like the other tribes. We cared for our elderly, our sick, and our children. Now we were far from the aid of the Avarosans—but war craves only blood and bones.

We could only ever stand a chance against the Winter’s Claw. If the Ursine struck first, our defense would be terrifyingly short. That hideous legion of half-bear abominations would overwhelm us.

And soon enough, we heard their battle-growls growing louder, along with the clamor of their footsteps. We smelled their stench. Hundreds descended the cliffs, like shadows twisting down the basalt slopes. We fashioned spears from our stretchers, and sharpened our carving knives on the flint. We would minister the

Lamb to our elderly and wounded, and the rest of us would dance with the

Wolf. It would all be over by morning.

No one saw who stoked the fire, but it grew so hot that we needed to back away. Then the furnace spoke, its voice like crackling logs.

“Volibear is near,” it said. “Seek shelter now.”

“There is no shelter to seek,” Olgavanna replied to the fire in the forge. We knew not in whose presence we stood. “Enemies are at our heels. The Ursine are flanking us.”

“The Ursine…” and the forge grew hotter at these words, “…will be stopped. The other problems are your own.” The goat-grass caught fire. The flagstones grew red hot around the edges, then toward their centers. Steam sizzled from the cracks.

Some shed their clothes to seek reprieve as the temperature rose. Others fainted. The next wave of blistering heat dropped us all to our knees, gasping for air. “I never thought I’d see the day!” cried Kriek, weeping tears of joy. Stone began to drip like candlewax. Masonry flowed down the base of the structure. The domed top of the forge melted inward, pulling the rest of the outer shell into a molten pool.

A flash of orange light blinded us, briefly silhouetting a humanoid figure. Then, a geyser of flame spouted into the air, drops of molten rock hardened on the ground at our feet.

Where the massive forge had stood, there was now a hulking beast, its form blurred by waves of heat. There it was, the forgotten legend Kriek always told us about—Old Ornn, as tall as three frost pines. The ancient forge-master cooled rapidly into fur and form, lava dribbling down his chin and hardening into a braided beard. His eyes were glaring embers. In one hand he carried a hammer, in the other he hefted an anvil with equal ease.

We gathered behind our warmother. Olgavanna gripped Fellswaig, her true-ice axe, and approached Ornn. “If the Ursine are your foes, we will fight by your side,” she said.

Then, in a gesture unbecoming of an iceborn warmother, she bent the knee and laid her weapon at Ornn’s feet. Fellswaig’s true-ice melted, revealing an ordinary bronze and iron axe beneath.

Ornn grunted. “Stand up. Kneeling is death.” He looked to the gathering thunderstorm swirling overhead. “I will deal with the Ursine. Do not follow me.”

He lumbered toward the advancing horde, who charged forward with vicious speed. We could see his fire reflected in their large eyes. Boarin hoisted the old shaman higher onto his shoulders. “Old Ornn swinging his hammer, he pounds valleys from mountains,” the legless fool half-sung.

We watched in stunned silence as the creature stood alone against the Ursine. With a roar, he brought his hammer down onto the ground, and a fissure cracked toward the advancing army, stopping just short of their vanguard. Spouts of lava and sulfur jetted into the sky, hardened fire rained down on the half-bear warriors.

Whatever Old Ornn was, he fought with the hot blood of the earth.

giant chunks of slag broke through the ground, cutting off their retreat. Ornn

charged and smashed them with more swings of his hammer. Still, they attacked with the viciousness of ten berserkers each. But we knew when Ornn reached their rearguard, for there was a deafening explosion—the slag wall shattered, and Ursine flew through the air in contorted arcs of burning flesh and fur.

The sky darkened with ash. Columns of smoke rose to clash with the menacing thunderclouds, and bolts of lightning lanced through the haze. The world grew eerily still as the

Thousand-Pierced Bear itself took to the battlefield. We could see its telltale shape: spears, swords, tusks, all were stuck in its hide. Lightning followed in its wake. And it laughed.

answering blare of the horn shook our insides. Lava bled from the black cliffs, rivers of fire flowed down the slopes, rushing toward the valley basin, and formed a surging wave. Bolts of lightning stabbed back at the cliffs, to cauterize the wounds in the rock, and a thick, caustic fog blanketed the entire caldera. We saw only blue-white bolts and hellish crimson explosions filtered by the thick vapor. The heat from below the ground scorched the soles of our boots.

Then we saw that surging wave of flame form into a great stampeding ram. Ornn charged at the molten beast, catching the thing he had named as Volibear between his shoulder and the lava-ram. The force of the explosion toppled us all. The legless shaman was thrown a hundred paces from Boarin’s shoulders, laughing the whole time.

We waited all night for the great cataclysm to overtake us, but it never came. We only heard the roars of the Thousand-Pierced Bear, and the gruff bellowing of the forge ram.

When the pall lifted in the late morning, we saw that the slopes around us were covered in chunks of hissing scree, and unnatural columns of crusted basalt rose at odd angles from the ground.

As we realized what stood before us, we recoiled in horror and awe. The Ursine were frozen in stone, their faces petrified masks of agony.

We did not see any sign of Ornn, nor Volibear. We had no time to look, either. The hunting horns of the Winter’s Claw announced their approach. We picked up our weapons and dug in our heels. What remained of our clothes were scorched tatters of cloth, but our skin no longer prickled with cold.

Olgavanna’s hair had been singed away, her muscular back branded with heat. Her once true-ice axe was bronze and iron, as naked as we were. She had never looked stronger.

Our blood boiled. Our stomachs growled. We were raw and blistered, bare and exposed.

We smeared our chests with ash in the shape of a hammer, and ram horns upon our faces.

We sang and chanted in the memory of last night, with the words of mad old Kriek.

We knew who lit the fire. The Winter’s Claw would know, too.