League of Legends Wiki
Register
Don't have an account?
Sign In
Advertisement
in: Lore of Runeterra, Lore of Demacia, Lore of Noxus,
and 2 more 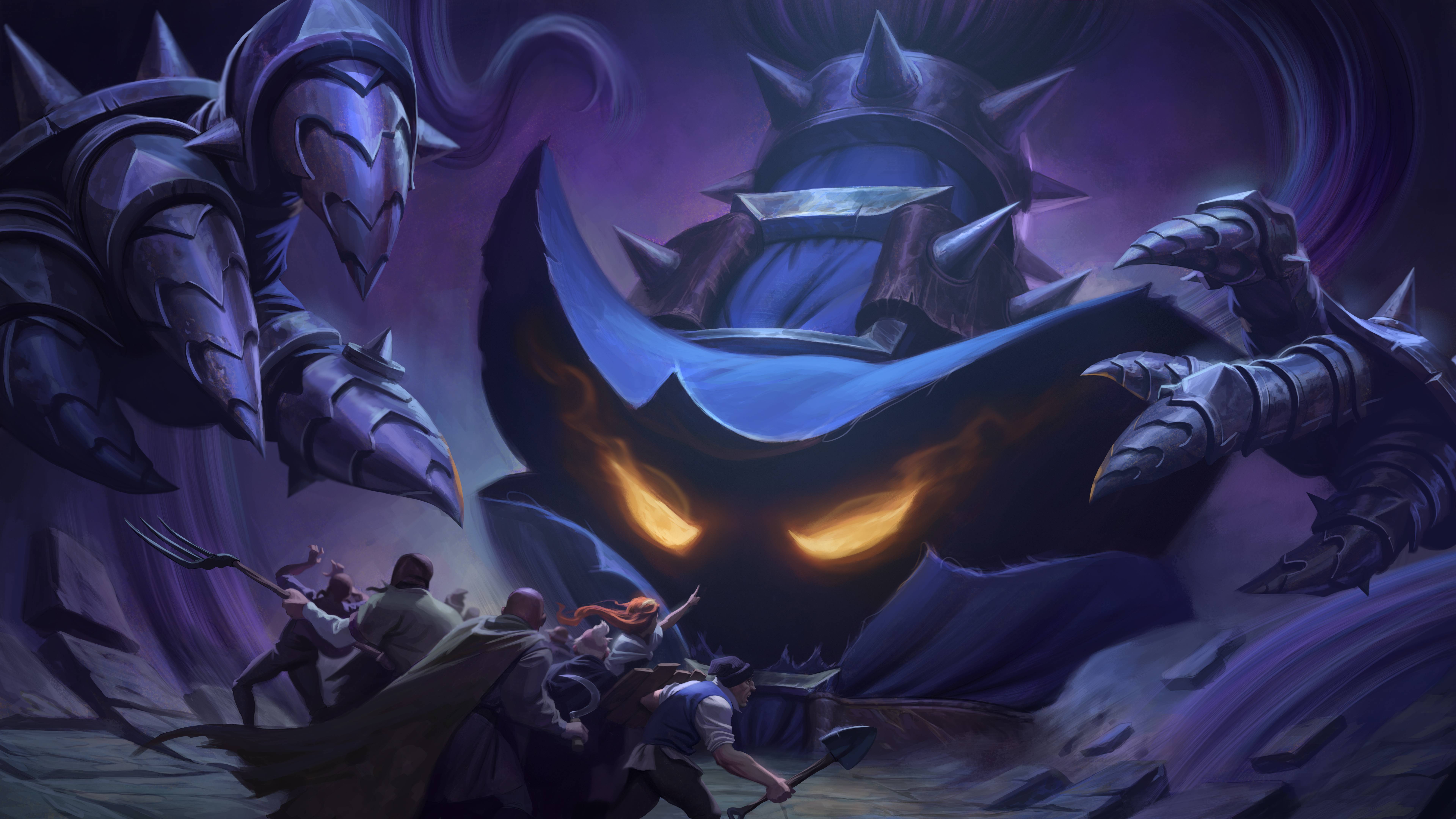 From the tower, the advancing mob looked like a child’s mismatched toys—all toothpick spears and tiny torches. The figure at the head of the group was tall, with a splash of grey hair, and a blade belted to her homespun tunic.

Veigar watched as the group started battering the outer gates, incensed by his villainous ways, demanding justice for the terrible acts he had wrought. Finally! He hurried down the stairs to the inner door.

There was a mighty crack as the gates gave way, and villagers tumbled into the courtyard. The leader drew her sword and advanced, picking her way between ungainly limbs, waiting for the rest of the group to find their feet and hold the right end of their spears.

Squinting through the gap in the door, Veigar giggled with anticipation.

The woman’s gaze snapped up.

Veigar clapped a gauntlet over his mouth, but the jig was up. The farmers tripped over themselves to cower behind their leader’s skirts. It was perfect. He stepped back and, barely holding his staff steady with all his booming laughter, blasted open the door with an explosive ball of purple energy.

He strode out to the top of the stone steps as the dust settled. He knew how imposing a figure he must strike—his hat barely clearing the enormous door frame, his iron boots sending up sparks and thunder with each giant step, his gauntlet big enough to crush any fool who might challenge him.

Unfortunately, the cowering villagers hadn’t looked up yet, and holding an intimidating pose this long was starting to feel forced. He let go of the breath he’d been holding, and deflated a little.

“The villain!” shouted the leader, eventually, brandishing her blade in his direction.

In the shadow beneath his hat, Veigar grinned. He drew himself up as intimidatingly as possible as the villagers beheld him.

Then the shouting and wailing began. Delightfully, someone at the back even fainted.

He gathered his sinister magic, gaining an inky nimbus, and causing violet sparks to leap off speartips and belt buckles. The leader stumbled back as a serpentine gash of deepest midnight encircled the villagers, and exploded upwards into an ensnaring cage of sorcery.

He relished every long stride down the steps toward the trapped mob. Around them, humming walls of violet light stretched between claw-like pillars, forming an eldritch henge. He stopped barely a sword’s length from the leader, glaring at his prisoners through his arcane barrier.

“I can see the fear in your hearts!” he began with a derisive, humorless, snort. “You dare march here to challenge my dread rule? I, Veigar, who has yoked the magic of the universe to my will? Veigar, Great Master of Evil, who has defeated countless arcane foes in my quest for ever greater—”

“Cursed my fields with rat-weevils for two seasons, you have!” an especially cloddish looking farmer cried out, crimson-faced with fury.

Veigar blinked, trying to process this interruption. “Cursed you with what…?”

With that, the banks broke and the villagers began to make all of their grievances heard. Veigar could only catch snippets of the loudest accusations, the majority featuring soured milk and undersized beets. As he shrunk away from the verbal onslaught, the purple barrier flickered and collapsed, but the villagers didn’t even notice. They shuffled forward, yelling in his face.

He felt the stone banister of the stairs at his back. He was surrounded.

He tried feebly to respond, his voice losing depth with every word. “But I… I am…” They crowded closer, glaring, now eye to eye with him rather than looking up.

Suddenly, a commanding older voice rose over the din. “Stand down. Everyone.”

“But Margaux…” someone began, before the leader’s glare withered their objection. The mob retreated, and Veigar found himself alone with her. She seemed more than twice his height by this point, and radiated confidence.

“Alright, villain,” she spat. “You’ve heard our accusations. Do you plead innocence?”

Veigar felt like he had been slapped. He puffed out his chest, feeling a foot taller. “Innocence? Innocence?!” He turned and began climbing the steps, gaining height on the crowd. “You have the audacity to bring your superstitious bellyachings to my door, and then insult me by asking if I deny them?!”

He glared over his shoulder in their direction.

“I do! I deny every one of them! But do not dare presume that I claim innocence. You accuse me of evildoing—and I am evil! Since I took this arcane tower from its puny owner, I have burned your fields! I have terrorized your warlords, defeating them so thoroughly that they swore never to return!” He took the last two stairs in one great stride. “And I have begun my campaign of terror upon neighboring villainous sorcerers! For none will be permitted to obstruct my path to ultimate magical power! ”

At this, the sky crackled, and magical bolts hurtled from the clouds, exploding around the courtyard. Veigar threw his head back and laughed, reveling in the sheer glory of his own evil. These puny mortals would beg forgiveness in the face of his terrible magnificence!

When he stopped for breath, the villagers were conferring in a huddle, casting appraising glances in his direction. One of them popped her head up. “Did you defeat Vixis the Cruel? The warlord?”

“Of course I did! She failed to exhibit proper deference, and I…”

His words trailed off as the group returned to their earnest whispers. Veigar shifted uncomfortably, straining to hear what they were saying. One by one, the mob nodded to each other, and turned to face him.

They found him coolly admiring the polished gleam of his gauntlet.

The leader, Margaux, strode to the bottom of the steps, awkwardly half-bowing, and addressed him. “Oh, great and mighty… uh… sorcerer…?”

“Mighty wizard. We, the residents of the barely-worth-bothering-with village of Boleham—”

“That’s our village!” someone helpfully interjected.

Margaux sighed. “Yes, our village. Well, you see, we’ve come to our senses, and do humbly beg the mighty wizard, Gray Jar—”

“Sorry! Veigar! We humbly beg that you spare us and just, umm, you know… keep doing what you’re doing.”

Veigar narrowed his eyes. “What do you mean?”

“Well, you know. We’ll just go home, and you keep doing your… reign of terror… thingy. Live and let terrorize, that’s what I say.”

This had to be some kind of trick. And yet, she went on.

“Of course, we’d exhibit the proper, you know, deference. Curse your name in your absence. Spread tales of your vile rampage. Frenk says his cousin down in Glorft heard a rumor of an evil sorcerer, if you’d be interested in, you know…”

“Destroying them! And taking their dread sorceries for my own!” Veigar clenched his gauntleted hand, imagining the sweet triumph of crushing an arcane peer in a wizard battle.

Finally, after a long pause, he rolled his eyes and flourished his staff.

“You fools! You thought you could trick me, Veigar, Master of Evil?! Perhaps you hoped I would grant you the mercy of a swift and painless end! Well, I regret to inform you that your lives are simply not worth my time!”

He laughed—a big, booming laugh to match his renewed stature.

“Take yourselves from my sight, insignificant peasants! Return to Boleham, and pray I do not find you worthy of my attention ever again!”

The villagers managed a few half-hearted bows or curtseys, before shuffling back toward the damaged archway. Margaux chanced a quick wink at him, then turned to leave.

“Wait!” he thundered. Her hand snapped to the pommel of her sword.

With as much indifference as he could muster, Veigar edged his way down the steps once more.

“When do you think I could talk to Frenk’s cousin about that other sorcerer?”