League of Legends Wiki
Register
Don't have an account?
Sign In
Advertisement
in: Lore of Runeterra, Short Story, Evelynn lore 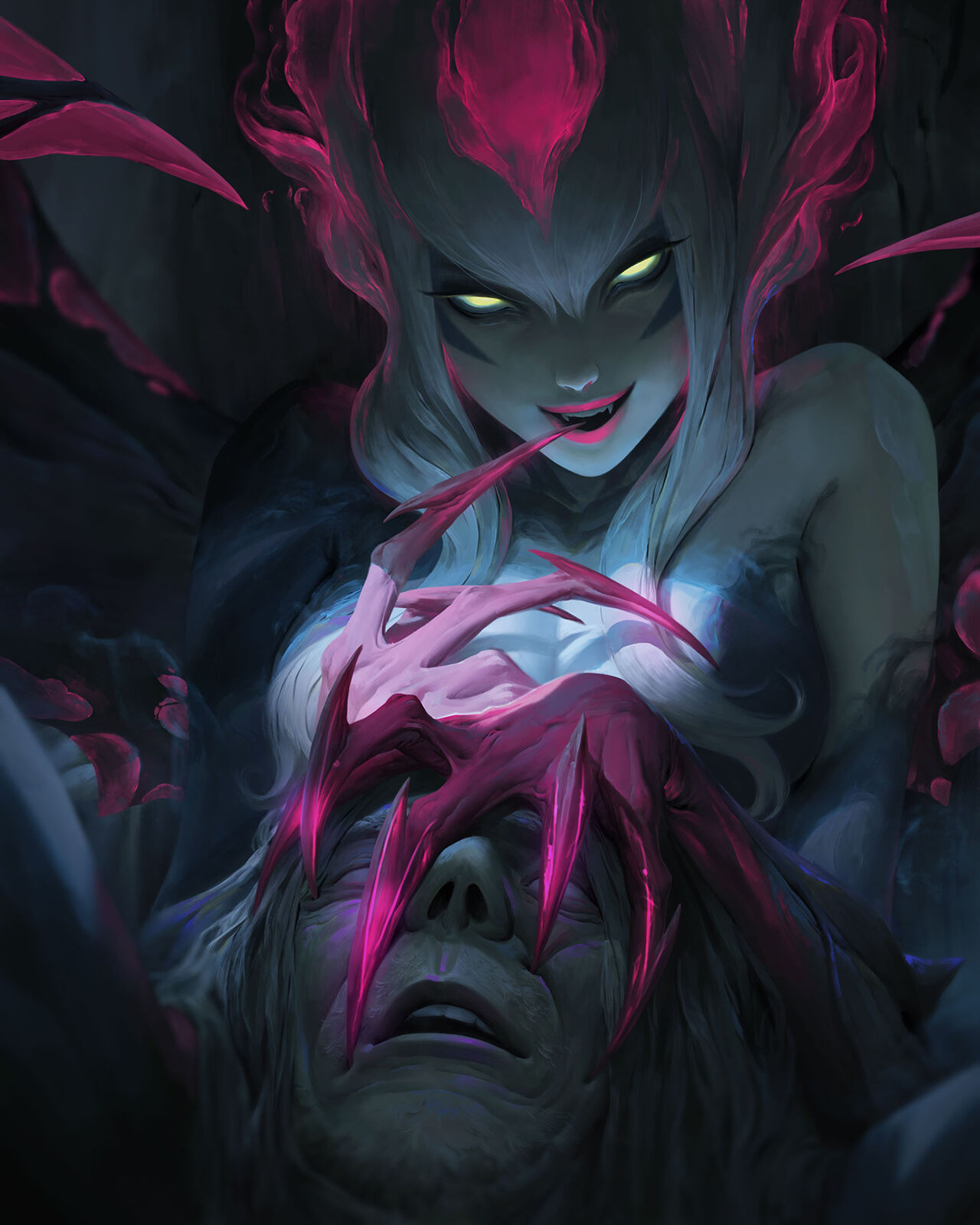 Evelynn’s gaze settled on a man lying in the gutter, a bottle of beet wine dangling from his hands. Ordinarily, the demon wouldn’t give a second thought to someone in his condition. But she had not fed in days, and she found herself desperate enough to consider the man, if only for a moment. It would be so easy. All she needed was to lure him to one of the numerous alleys far from the glow of the street lamps.

The thought perished as she watched a cockroach scurry across the drunk’s face. This was a man too inebriated to feel. His arousal would be vague and muted, with none of the urgent attraction she loved to see in her victims before she brought them low. She might even flay an entire arm before he mustered a scream.

And that was the problem. Over the course of countless feedings, Evelynn had learned everything about her palate: She preferred—no, needed—her victims to feel every prick, every bite, every bit of flesh she peeled away with her claws. A man in this condition would be dull and unfulfilling, scarcely worth her time.

She dismissed the drunk and continued down the muddy promenade, past the windows of a dank, candlelit tavern. A fat, belching woman threw open its door and stumbled out into the night, grasping a half-eaten turkey leg. For a moment, Evelynn considered the woman, how she might woo her into an embrace, and then into the unspeakable hell that would follow.

The demon watched as the woman wolfed down the rest of the meat, never tasting it. There was something deep inside her, a melancholy that would taint the experience.

Evelynn preferred inflicting the pain herself.

The demon moved on, gliding through the shadows of the town, over two more drunks, past a beggar asking for alms, between a couple in the midst of an argument. Evelynn found them all completely unappealing. Hurting them would be like plucking a flower that had already wilted. She preferred her daisies tall and healthy, for those were the most satisfying to cut down.

A dreadful thought overtook her. Perhaps she’d made a mistake choosing this wretched backwater as her hunting ground. Perhaps, at any moment, the thrill from her last victim might wear off, leaving only the nothingness—that utterly empty space inside her where feelings should be.

And then, she saw him…

The gentleman was positively beaming as he exited one of the high-end pubs. He was dapper without being flashy, and he hummed a jaunty tune to himself as he set off down the street with a bouquet of flowers tucked gingerly in the fold of his arm.

The two lashers on Evelynn’s back writhed with excitement. Even from a distance, she sensed this man was completely content in his own skin. She dashed after the gentleman, taking great care not to lose track of her prey or to alert him to her presence.

He walked for nearly half an hour before finally turning up a long walkway toward a modestly sized, cut-stone manor. At the end of the path, the man stepped through the heavy oak door to his home. Evelynn held her unblinking gaze on the windows of the man’s house as they lit one by one with warm candlelight. A slender, austere woman in a high-necked evening gown entered and greeted the man with a welcoming embrace. She feigned a slight surprise at the flowers he had brought, before placing them in a clean vase, right next to an old bouquet.

A moment later, two children, scarcely out of diapers, ran into the room and threw their arms around the man’s legs, their wide grins sparkling with tiny teeth. Though the scene played like the epitome of domestic bliss, Evelynn knew what she would find if she probed just a little deeper.

She waited patiently, watching the candles go out one by one, until only the parlor remained lit. The man was alone, settling into a reading chair to draw on his pipe. Evelynn crept out of the shadows, her dark, wispy limbs giving way to warm flesh. Her demonic lashers disappeared behind her back, revealing a shapely female form, with curves too generous for any eye to ignore.

Her hips waggled softly as she sauntered across the lawn to the window. She was nearly arm’s length from the glass when she saw the man bolt upright from his chair at the sight of her, his pipe nearly falling from his mouth. Evelynn beckoned with a single finger, motioning for the man to join her outside.

The man crept to the front door and opened it tentatively, curious to investigate the strange beauty lurking outside his window. He approached her on the lawn with great apprehension, and greater anticipation. “Who… are you?” he asked timidly.

“I’m whatever you want me to be,” assured the demon.

As Evelynn locked eyes with the man, she plumbed the depths of his soul and found exactly what she was looking for—that tiny lesion of discontent that festered within even the happiest person.

There it is, she thought. All that he wants and cannot have.

“My family…” the man said, unable to finish his thought.

“Shh. It’s okay,” she whispered in the man’s ear. “I know what you want, and the guilt you feel for wanting it. Let it go.”

She pulled back to find the man hopelessly captivated.

“Can I… have you?” he asked, ashamed of his brazenness, but overcome by a strange desire to take her right there on the lawn.

He touched her face with the tips of his fingers, caressing her cheek. She held his hand firmly to her skin and released a soft, sultry chuckle. This sweet, tender, happy man would be hers tonight. He had so much pain to give, and she would take it all.

From behind them, the shuffling of slippered feet sounded from the open doorway of the house.

“Is everything okay, love?” asked the man’s wife.

“Everything’s going to be wonderful, my darling,” the demon answered for the dumbstruck man.

The deal had become even sweeter, and the prospects more enticing. There was one daisy in full flower to pluck, and one bulb to bloom while it watched.