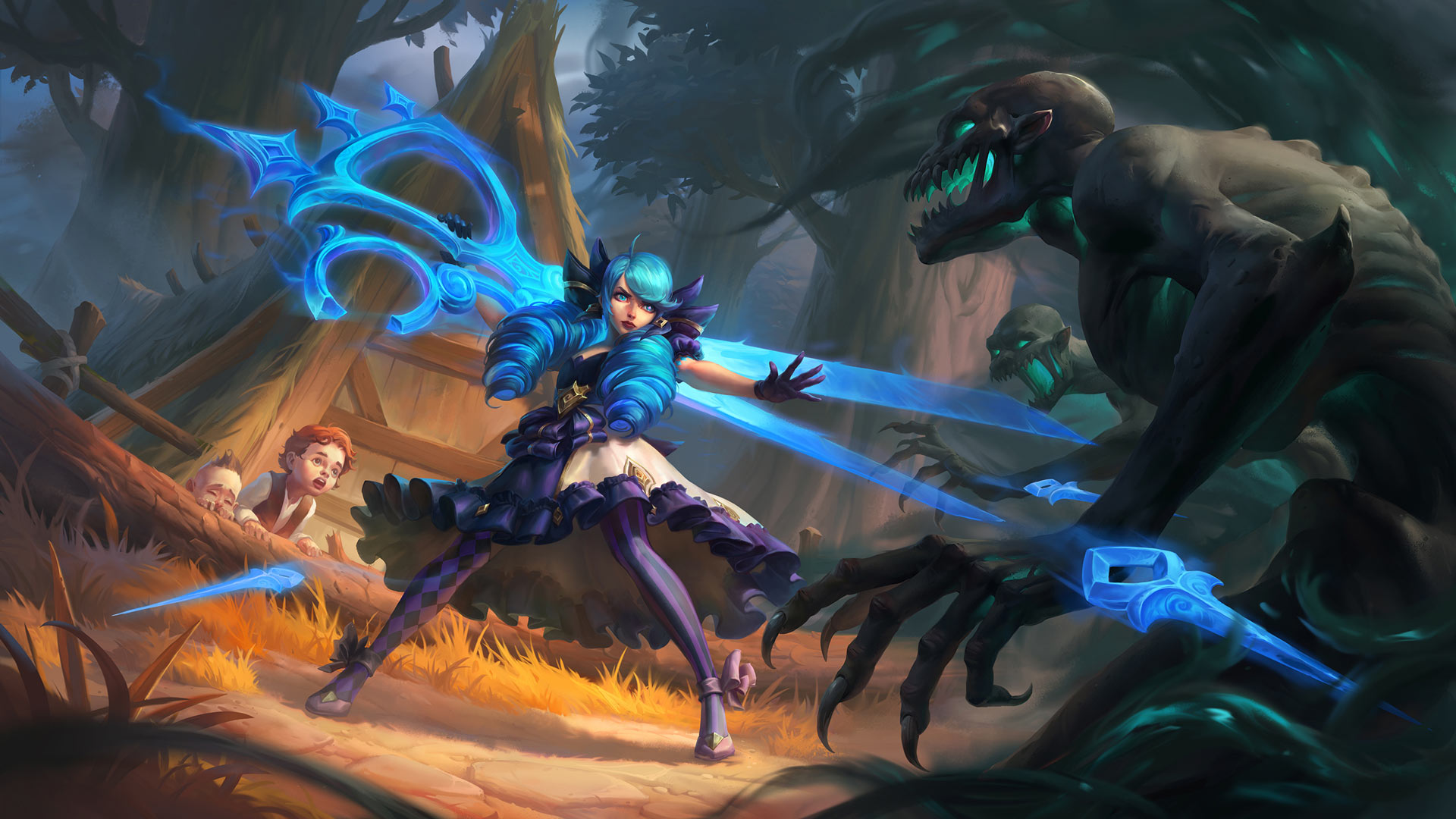 Under the setting sun, hidden behind a dense thicket, a young lady stands with large black bows in her silvery blue hair, complimented by golden ornaments and an elegantly tailored dress.

Under the setting sun, hidden behind a dense thicket, a young lady stands with large black bows in her silvery blue hair, complimented by golden ornaments and an elegantly tailored dress. Her hands grip a pair of giant spectral scissors. It has been weeks—months, maybe—since she first arrived on the western continent. The land here paints a vast horizon, the biggest she has ever seen, but Gwen has one thing on her mind:

She has tracked it here all the way from the

Isles, stopping it wherever she could. Not far off in the distance sits a small cobblestone farmhouse. A chimney puffs out smoke. Foggy windows begin to glow with the reflection of candlelight. A wooden door swings open and two boys run out, each holding a doll. They chase one another across the farm, laughing and shouting words of battle. In this moment, they are no longer children and their toys no longer cloth and string. They are kings and their toys are brave warriors, fighting evil to defend their kingdoms.

Gwen sighs. She thinks of her maker’s home, not too different from the one before her now. She remembers how it felt to play without a worry in the world. Back when she was a toy doll herself, back when her maker was happy and safe...

The pain always hits first. Gwen clutches her chest, and then she sees it. From the woods to the east, it comes: thin tendrils of blackened mist, coiling over each other to form almost familiar shapes. Their contorted hands claw for life under the weight of piercing screams. The boys drop their toys and run.

Gwen cannot bear to hear their cries. Not those of the Black Mist—that she has heard many times—but of the children. They are innocent. They deserve joy.

She leaps out of the thicket. Her scissors swing high above her head, white wisps flowing from their closed blades. As her dress twirls, she slashes in a downward arc, ripping a slew of unsuspecting Black Mist wraiths asunder.

“Ha!” Gwen shouts. “Took you quite long enough. Scared of me, are you?”

The wraiths turn their attention to Gwen and screech through jagged maws.

Gwen looks to the stunned children, crouched behind a fallen tree. Her voice softens. “Don’t worry. I won’t let them hurt you.”

Gwen opens her scissors. For a breath, the wraiths stand still. Gwen seizes her chance and dashes forward.

She cuts too fast for the naked eye. Tufts of darkness appear and fade, sheared out of existence by Gwen’s magical blades. One, two, three seconds later, and only a small handful of the Black Mist’s servants remain.

Gwen catches her breath, one hand on her knee, the other holding her scissors nose-down in the dirt. Ripped threads of her dress sway in the wind. Her eyes scan for the collapsed tree. Two pairs of frightened eyes peek out. She turns her attention back to the wraiths. “I won’t let them down,” she says to herself. “I promised I wouldn’t let anyone down.”

She plucks a few needles out of her pocket and throws them upward. With a spin, she smacks a hand down on the ground. The needles, as if on command, fall into place and form a circle around Gwen. She closes her eyes and whispers,

“Hallowed be my mist.”

Threads of mist, white with glints of light, flow from each needle. One boy covers his eyes. The other looks on. This mist is different. It feels quiet, warm, safe even? Its threads swirl and blend neatly, the work of a master seamstress. Soon, Gwen is shrouded by a protective fog.

A single wraith, brave or desperate, dives into this mysterious domain. The others corral nearby, eager to follow. Inside, Gwen dances circles around her foe. She dodges every claw, every swipe, chuckling between the clangs of her scissors.

Another wraith enters. Another chuckle echoes.

From the outside, both boys watch in awe. Who is she? What is she?

To them, it appears easy, but Gwen knows these wraiths are relentless. She needs to end this. Gritting her teeth, she swings her scissors, slicing another wraith in two before setting her weapon aside.

She draws her last needles and, channeling all the magic she can muster, shoots them forward. They fly from the shroud into the hollow chests of the wraiths.

Gwen does not chuckle. She lets out a triumphant yell as the wraiths burst and vanish, leaving only needles on the dirt.

A cool breeze tickles Gwen’s glistening brow as all the mist fades. She grabs her scissors and needles, and exhales. Her eyes turn back to the fallen tree where the children now sit.

Gwen approaches them. “Are you alright?”

A grass-stained face looks at her and nods. “You’re amazing!” the other boy exclaims. He drops his torn doll to the ground where another already lies. “Not like us,” he mutters under his breath. “We can’t do nothin’.”

Gwen frowns. She senses their pain. They were helpless, and they have every right to be sad and angry, yet she can’t help but see the broken dolls and feel hurt herself.

“Who are—” one boy begins. “Will you stay with us?” the other blurts out.

Gwen wonders for a second before a bedraggled woman, short of breath, rushes out and embraces the children.

“My darlings! I’m so glad you’re safe,” she says, tears flowing down her face.

“Oh, you’ll have to forgive me,” the woman replies. “Where are my manners?” She wipes her eyes, sees Gwen in full for the first time, and hesitates.

“She’s our mom, duh!” a child says. The woman nods and kisses her son.

“Thank you,” the woman says to Gwen, her voice quavering. “I don't know what those things were, or who you are, for that matter... but you saved my boys, and that’s enough for me.” Her hands reach toward Gwen, palms open—a sign of gratitude.

Gwen looks at the mother’s hands, the calluses on her fingers and the nicks in her nails. She sees her apron, its front pocket holding a near-empty spool with thread trailing toward the cobblestone house. Gwen eyes the broken dolls again and smiles knowingly. Watching the mother’s arms wrapped around her children, she hears laughter. Its sweet tones of happiness and relief remind Gwen of something stronger than the children’s pain.

And not just a pure, innocent kind, but one born out of sacrifice. Gwen steals a glance at the distant horizon, remembering her maker. She lays her scissors down and picks up the children’s dolls, setting them in their mother’s hands.

“Oh, these silly toys I made for them,” the woman says.

“Why, I was once a silly toy, just like these,” Gwen says. “But I was brought to life by magic.”

“Well, I’m not entirely sure,” Gwen thinks aloud, “but the person who had that magic was my maker, you see, and the sacrifices she made came from a very special place. A joyful, loving place.”

Gwen turns to the woman. “Your mother might know.”

The woman and her children stare at Gwen, confused.

“I’m sorry,” Gwen says to them, knowing the Black Mist is still out there. “I must get going.” She grabs her scissors with one hand and flicks out two threads with the other. They float in the air, two precious heartstrings, before finding homes in the dolls’ torn fabric, sewing their rips together.

“Wow!” one boy says, lifting his mended toy up high. His brother imitates Gwen’s flicking motion at his own doll, hoping it’ll somehow animate on its own. “I wish I had magic,” he says, eyes wide.

Gwen looks at the mother, whose love is reflected in how tight she holds her children, and sees the brothers’ joy, listening to their renewed laughter as they play with their dolls.

“You do,” Gwen whispers before turning to leave the family behind.