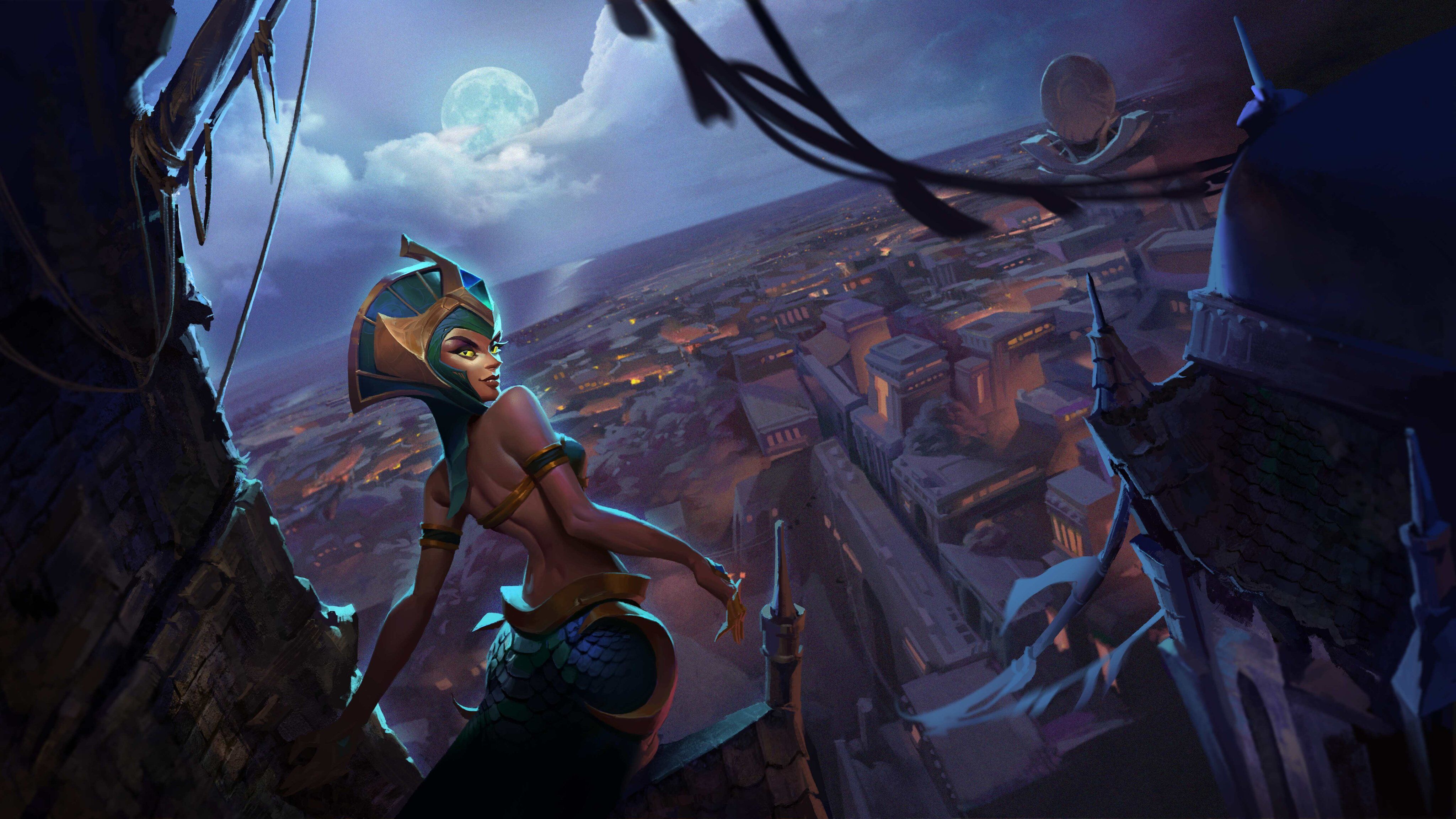 The Shedding of Skin

Untroubled by the cool night air, Cassiopeia wore a shift of translucent silk, which revealed the transition at her hips where soft skin merged into sinuous, overlapping snake scales. The scent of roasted meat wafted up to her hidden aerie, but it could not mask the vile stench of thousands of people living on top of each other. Her mouth burned as noxious

venom mingled with her saliva. She flexed her muscular

tail, cracking the stonework and sending crumbled fragments to the streets below.

Rats scattered from the falling stone. Filthy street urchins dashed around street corners as hooded figures whispered in the shadows and burly soldiers staggered in and out of taverns. All were oblivious to the predator lurking in the darkness above.

Cassiopeia brushed a taloned hand against her scaly side, her serpentine figure concealed by the shadows. Once, she had been a powerful figure in Noxus: assassins killed at her slightest whim, soldiers spilled their darkest secrets, and generals willingly followed her counsel in the hopes of patronage. Cassiopeia sighed. These days, she emerged only under cover of night. No longer was she an influential voice in Noxian society—not since she had been reduced to this grotesque abomination in hiding.

Upon her return from the desert, Cassiopeia had hidden in the crypt of her family’s residence, fearful of her transformation. She remained alone in the cold, dank vault for weeks, filled with disgust for her serpentine body and mourning the loss of her aristocratic life.

Eventually, a growing desire to hunt overwhelmed her, and she ventured out to roam the city by night as the household slumbered.

Cassiopeia put aside her reverie as a broad-shouldered soldier in a leather breastplate stumbled from a tavern, drink in hand. Finally; this was the man she’d been waiting for. She trailed his movements from above, following him silently over fortress walls and archways, until he entered an empty courtyard. Perfect. Cassiopeia slithered onto an adjacent roof, eyes glinting with predatory thrill.

Her figure cast a shadow across the soldier. He turned, drunkenly defiant.

"I know you're there! Show yourself!" he said.

Cassiopeia’s tail twitched in anticipation. Her forked tongue extended, tasting the air. She drew the sweet scent of his blood into her lungs, then exhaled with great satisfaction.

"Fight me face to face!" he shouted. "I ain't gonna be stalked like some animal."

Cassiopeia let out an angry hiss. By the time the soldier looked up, she’d slid to the opposite side of the courtyard and perched directly above him, remaining out of sight in the shadows.

"You consider yourself better than an animal, do you?" she said.

The man’s head turned abruptly, trying to pinpoint the sound of her voice.

"How'd you get across so fast?" he said, his wavering tone betraying false bravado.

"Even beasts are nothing to your savagery," said Cassiopeia.

Breathless, he edged away, looking for an escape. He hammered his fists against every door, but each was bolted shut. Cassiopeia imagined his mind racing to solve the riddle of who was hunting him and why.

He unsheathed his sword, turning on the spot, unsure where to direct his threat. "You don't want to cross me. I've gutted worse enemies than you."

"Not just enemies," Cassiopeia replied. "I've seen your handiwork. You're not the only one who creeps about in the dark."

She spat a bilious wad of venom as he turned toward the sound of her voice. The man howled in pain, coin-sized holes burning through his armor and into his skin. She inhaled the satisfying sear of burning leather and flesh.

The man brandished his sword. "Who are you? Why're you doing this?"

"I’ve been watching you," replied Cassiopeia. "I know what you are, what you do…"

"What I do is no business of yours."

"I know you're murdering children for drake meat. I hear it's quite lucrative."

The man tried to pry open the shutters of a nearby window with the flat of his sword, but they too were bolted shut.

"Then there's the three tavern wenches," said Cassiopeia. "Sarmela, Elmin, and Lyx. They were found in the river yesterday. Their faces were hardly recognizable once you'd finished with them."

She relished the thought of sinking her talons into his flesh.

The man readied his stance. "You can't fight me from the shadows. Show yourself!"

She slithered down to the courtyard and rose to her full height. The man’s eyes widened in horror, his hands trembling. Cassiopeia stood head and shoulders over the man, glaring down with narrowing eyes.

"Monster," murmured Cassiopeia. "Not the worst I've been called."

She slid left and whipped her tail across his legs, effortlessly knocking him to the ground.

Curling her tail around his chest, she squeezed his ribcage tighter and tighter, sensing his pounding heart straining beneath her grasp. She heard bones crack. She resisted the urge to break him completely, and released her grip. He crawled to his sword, grasping it in desperation. She so enjoyed watching him tremble.

She circled him slowly. He met her gaze and stared in slow recognition.

"I know your face. The Lady Cassiopeia!" he said. "Look at you!"

Point to the ground, he pushed himself onto his feet with his sword.

"You chase drunkards like me through the filthy gutters of this city now, is that it?" The man spat a wad of blood. "From such great heights we fall, eh?"

gaze bored into the man’s eyes, locking them in a cold-hearted bond. She screamed, pouring all her rage into the cry; fury at the unfairness of her current state, anger at the loss of her privileged life, resentment for her failed ambitions. She channeled it all into the screeching, mind-shredding wail.

As she screamed, her fury was replaced with joy. It felt like she was floating, her potential for greatness infinite. Every fiber of her being sang with ancient power.

Searing emerald light blazed from Cassiopeia’s eyes. The man’s final panic was outlined in silhouette as he petrified from the inside out. His stare hardened, greyed, and stiffened, his last cry of terror stifled as her curse transformed his flesh to stone.

Cassiopeia slithered up to the statue and softly caressed its hard cheek. What was once skin fractured into a grisly pattern resembling a dried riverbed.

"Once, I had to manipulate, bribe, or otherwise... persuade people to orchestrate my schemes," she said. "But now... now I simply take what I want."

She whipped her tail forward, smashing the statue to the ground. She smiled, eyes glinting, as it shattered into a thousand pieces of rubble and dust.

Cassiopeia flushed with pride as she considered her handiwork. Her life as a noble was over, yes, but never had she felt such boundless power coursing through her veins. She slithered back onto the rooftops, her mind awhirl with ideas.

Her next victim would offer her a far greater challenge.

Lore and Events
Retrieved from "https://leagueoflegends.fandom.com/wiki/The_Shedding_of_Skin?oldid=3088707"
Community content is available under CC-BY-SA unless otherwise noted.