League of Legends Wiki
Register
Don't have an account?
Sign In
Advertisement
in: Lore of Demacia, Short Story, Sylas lore 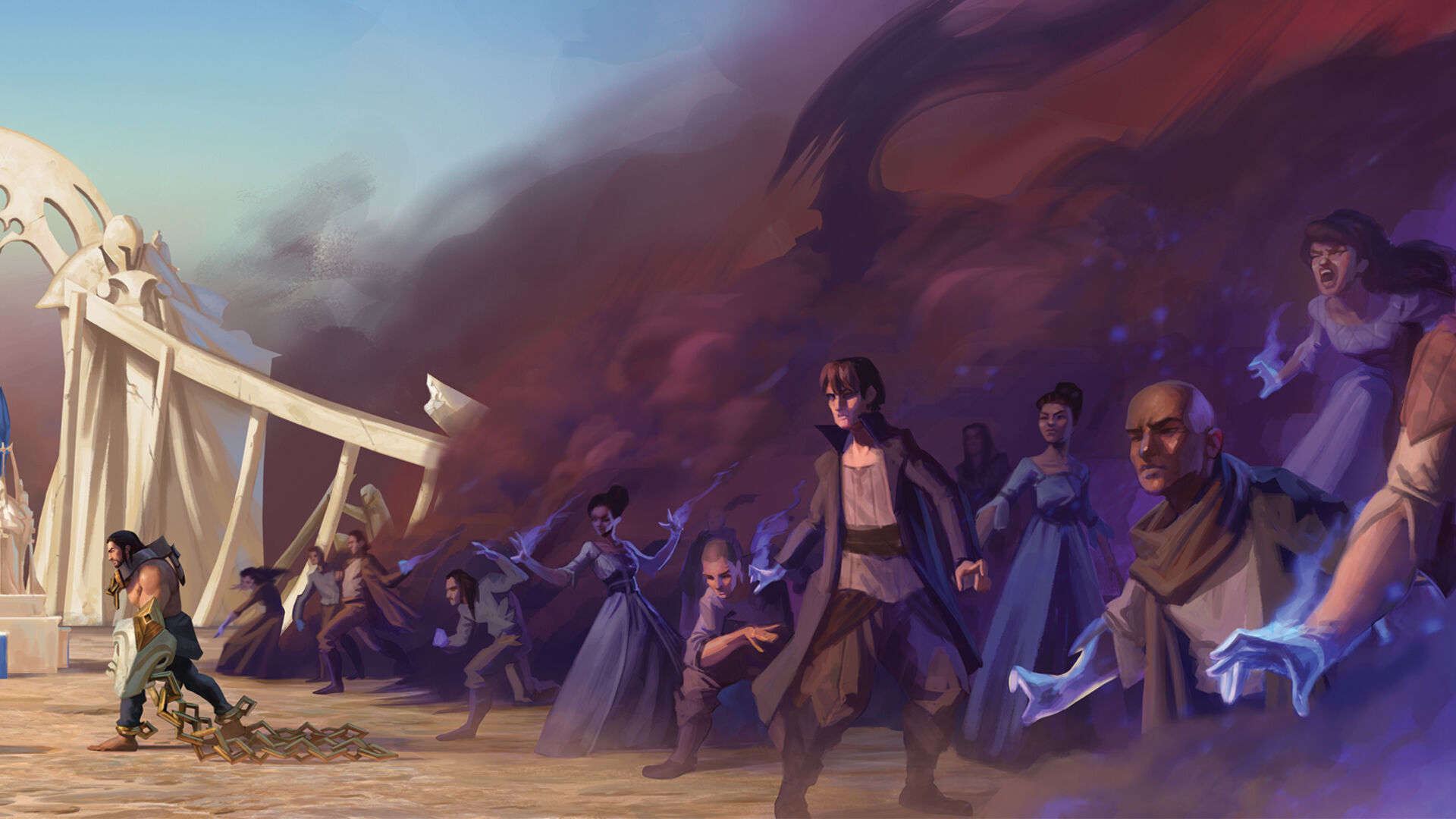 The sun was at its peak, just high enough to illuminate the exiles' camp hidden deep in the canyon. From the shade of his lean-to, Sylas of Dregbourne waited patiently for his scout to return. At last, he saw her rounding the stone spire at the mouth of the crevasse, leading a wide-eyed young stranger into the camp.

The sun was at its peak, just high enough to illuminate the exiles’ camp hidden deep in the canyon. From the shade of his lean-to, Sylas of Dregbourne waited patiently for his scout to return. At last, he saw her rounding the stone spire at the mouth of the crevasse, leading a wide-eyed young stranger into the camp.

Sylas emerged from his shelter, eyeing the youth casually. “Does he now?”

“I know him from the underground. The seekers took his family. He made it out, by the hair on his hide.”

Sylas nodded, quietly assessing the young man. He could sense the boy was blessed with powerful magic—some black and deadly pall. As for the rest of his character, Sylas could see nothing.

“He’s a good kid,” assured the scout. “And he’s from Dregbourne.”

The youth stammered out an introduction. “I… I thought maybe… I could join your cause… sir.”

The entire camp of outlaws laughed. The boy’s eyes darted around the grinning faces, searching for some hint of what he had done wrong.

“There’s no ‘sir’ here,” chuckled Sylas. “Unless you want to address everyone of us that way.”

Abashed, the recruit seemed to wonder if he’d made the right choice in coming to the camp. Sylas placed a heavily shackled arm on the boy’s shoulder, hoping to quell his embarrassment.

“Be at ease, Happ. No one will judge you here. We’re a long way from Dregbourne.”

He felt the youth relax his posture.

“I know your struggle. They’re always watching you, hounding you, making you feel inferior. Well there’s none of that here. Here, you belong.”

Happ beamed, staring at his feet, as though he felt unworthy of his newfound joy.

“Do you know why I wear these chains?” asked Sylas.

The recruit shook his head, too timid to offer a guess.

“They’re not just weapons. They’re a reminder. Of where we come from. Of everything we’re capable of, and of our liberation to come. Are you with me?”

“Good,” said Sylas. “Tonight, you will break your own chains.”

Dusk was falling, and the darkened brush on the side of the road was the perfect cover for an ambush. There, Sylas lay in wait with a dozen of his most trusted mages. Beside him, the recruit nervously picked at his fingernails.

“Don’t worry,” said Sylas, with a reassuring smile. “I was nervous for my first one. After a while, it becomes as natural as breathing.”

Before the recruit’s nerves could be assuaged, the thunder of hooves and wagon wheels rumbled in the distance like a coming storm. Within seconds, the carriage came barreling down the road before the lurking hijackers.

An instant before the horses arrived, Sylas signaled to his comrades, and the ambush began.

With a flick of his wrist, a scruffy old mage summoned a thick cord of ironvines that snapped across the road, catching the galloping horses at the knees. The racket was deafening, as the steeds fell neck-first into the dirt, the carriage careening over them.

The mages sprang from their cover, subduing the dazed crew of the carriage with various weapons and spells. Sylas leapt atop the overturned coach, eager to seize the passengers of the unprotected cabin.

“Let’s go, recruit,” he called to Happ, beckoning for the lad to join him.

Happ scampered atop the cabin and began to help pry the door. It cracked open, revealing a very battered nobleman. Sylas’ eyes flashed with a malicious gleam.

The nobleman bristled. Though he was gravely injured, his hatred for Sylas remained intact.

“I’ll not cower before the likes of you.”

“Good,” said Sylas. “Because I wouldn’t want you to miss this.”

In minutes, all of the nobleman’s guards and coachmen were lined up beside the road with their hands bound. Sylas paced the line, individually acknowledging each captive.

“I ache for you all. I do,” said Sylas. “You are merely cogs in their wheel.”

Sylas paused, his tone shifting harshly, as he gestured to the bound nobleman.

“But you chose to serve them… and thus, serve their cause.”

He turned to his band of outcasts, loudly offering a question.

“Brothers and sisters—these folk work in the service of swine. What does that make them?”

“Should we allow them to go free?”

“What if they have a change of heart? Promise never to bother us again?” asked Sylas, with a coy smile creeping across the corners of his mouth.

“They’d be lying!” yelled the scruffy old mage from the brush.

“They can’t be trusted!” said another in the gang.

“Then what is to be done with them?” asked Sylas.

“They must die!” shouted a young mage, his hatred beyond his years.

Others yelled out in agreement, until the phrase echoed across the land: “Swine must die!”

Sylas nodded, as if he were slowly being persuaded by their words.

Softly, Sylas touched the shoulder of his recruit. His petricite shackles began to fume with a dark smoke. He closed his eyes, savoring the captured power.

The sight sent a quake of dread through the captives. Many fell to their knees and wept, pleading to be spared. Only the nobleman stood proud, defying his circumstances, as Sylas addressed his crew with somber finality.

“It pains me that I cannot show you the beautiful world to come.”

The words sent a chill through the recruit.

“Sylas, no,” Happ protested. “These are just… people.”

Ignoring the pleas, Sylas extended his arms and fingers, and unleashed the magic stored in his gauntlets. A thick black cloud billowed from his fingers and collected above the heads of the nobleman’s crew. Almost in unison, they began to claw at their throats in suffocation. Moments later, they fell to the ground dead.

A grave hush fell over the mages, having dutifully observed the execution. The nobleman wept silently, tears streaming over his clenched lips. The only sound came from the recruit.

Sylas eased the boy back to his feet, consoling him with a fatherly hand.

“Happ, you wanted to help our cause. This is it! This is our liberation…”

He gently guided the recruit toward the nobleman, and urged him forward.

Happ looked at the nobleman through tear-filled eyes. He held out a trembling hand, preparing to take the life before him. Then, he let his arm go limp.

“This man is not your friend. His fortune is built on your suffering. He would sooner see you hang than show you any kindness.”

The recruit would not budge. At last, the nobleman found his voice.

“You’re a monster,” he said, his voice breaking.

“Yes,” replied Sylas. “That’s what your kind said when you locked me in the dark.”

Sylas held forth his hand, its shackle still faintly glowing. The magic he had taken from Happ mustered one last wisp of blackness. The small, dark cloud enveloped the nobleman’s face, drawing the breath from his lungs. As the man writhed, Sylas looked back at the recruit, not in anger, but mourning.

“I’m sorry, Happ. But you are not ready to be liberated. Go. Return to your chains.”

Sylas watched as Happ turned to leave, his eyes averted in shame. The recruit looked down at the wrecked carriage in front of him, and the long, dirt road that wound back to the capital. Sylas could almost feel the boy thinking, dreading the misery that awaited him in his old life.

Happ bent down, pried a dagger from the hand of the dead coachman, and returned to the nobleman, still struggling for breath on the ground.

As the youth raised the dagger above the nobleman, Sylas’ sorrow turned to unmitigated joy. No matter how many he liberated, it always made him smile.
▲ TOP ▲