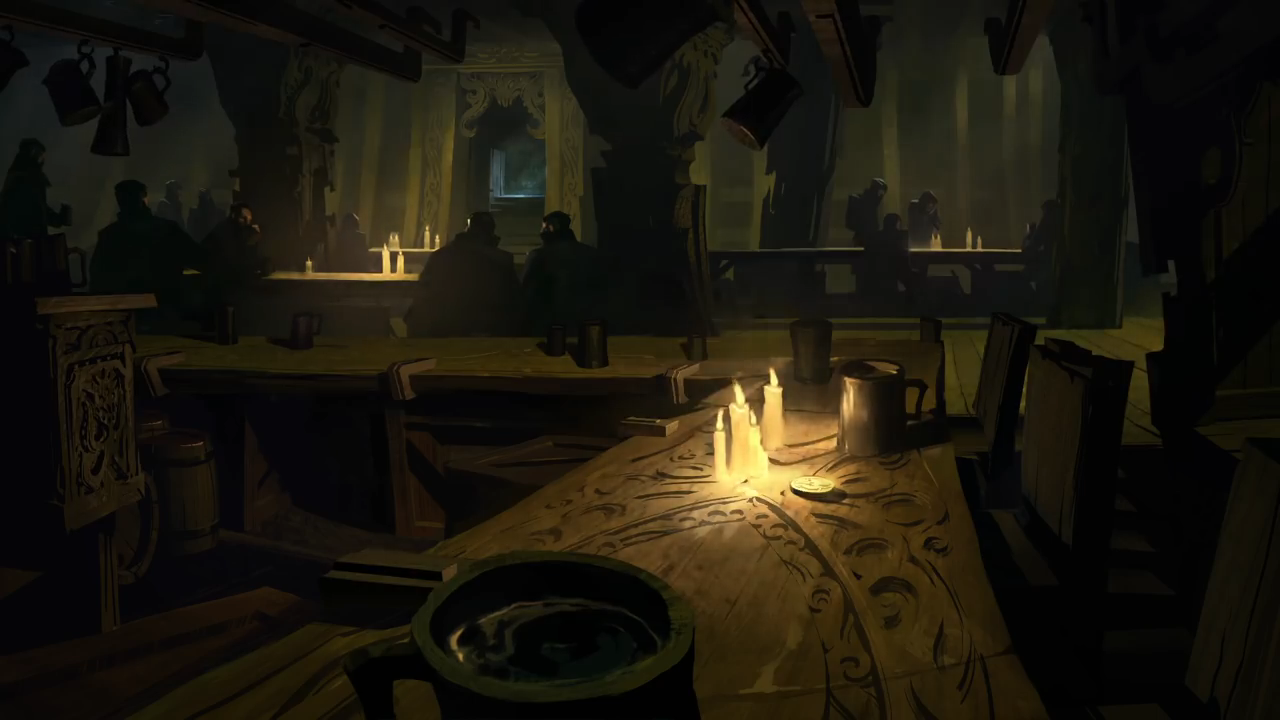 Aye, I’ve seen a few shipwrecks. Been in one me self, as it goes, back when I was young like you. Her name was the Ophidian, that ship, pulled down beneath the Jagged Straits. I was the only survivor too, mind. Maybe you buys me a drink, and I’ll tell ye about it.

This? No, this coin’s not for spending, friend. That’s my lucky Kraken, for to pay the Tithe.

The Tithe. Ye know the Tithe. Everyone knows about the Tithe. “Pay the Tithe, or face the ocean’s wrath.”

Oh, by the Bearded Lady... Then you never heard o’ Nautilus, either? The Titan of the Depths?

Barkeep! Pour us a round, barkeep, there’s a good lass. This is a tale that needs an ale, as they say... and my friend here’s buyin’.

Ahh, that’s the good stuff, that is.

‘Twas almost thirty years back, now, returning from a hunt. I was a harpooner, finest shot in the Slaughter Fleets. We’d caught ourselves an axe-fin leviathanaye, one o’ them big, mean boggersand we was haulin’ the beast back to port. It were just before dawn. Bilgewater’s city lights flickered in the distance, beckonin’ us in. There were razorfish and berserker sharks following close by, ‘cos the axe-fin was oozing into the water, see.

And our captain... Well, none of us much cared for him. Untrustworthy sort. He swears blind he paid the Tithe ‘afore we left. “A single gold Kraken,” he said, “for ‘tis all I have to give.”

But none of us seen him throw it over the side, now did we. So, naturally we was suspicious, ‘cos we knew he was a tight-fisted old wharf rat. But on we sailed anyway.

And that was when the Titan hit us.

Without warning, this bloody great anchor comes at us from below. Smashed clean through the keel, up through the main deck. Caught us tight, and started pullin’ us down... Oh, it was chaos, friend. Sailors thrown overboard. The waters churnin’, scavengers feedin’. I grabs the captain, screamin’ at him, “You’re a liar! This is the Lady’s punishment for those as don’t pay!”

The ship was going down fast. But then the planking gave way, didn’ it, and the anchor slid back into the depths. If it had ended then, more of us might’ve got away.

But it weren’t over. Nautilus weren’t done wi’ us yet.

The ship tipped to starboard, right-sudden. It was the weight of the Titan himself, hauling up onto the deck. Perhaps once it’d been a man, but it weren’t no man I saw that night, risin’ from the waves. I has our captain by the throat. “This is your doing!” I roared, as I chokes the bastard, his eyes wide. He can see Nautilus is comin’ for us...

So I shoves the captain away, down the slanted deck, and this thing catches him in one hand, if you can believe it! It was so big, the fingers closed completely around ‘is bodyand the captain weren’t a small man by any stretch.

“There’s your Tithe!” I yells, and jumped overboard.

I dunno how long I was in the water. Must’ve only been seconds, but it felt like an age. But the sea scavengers didn’t get me, Mother Serpent be praised. Pulled myself up onto one of them stone pinnacles, out there in the Straits, an’ I watched the Ophidian sink.

Nautilus still held the captain, squirmin’ and wrigglin’ like a stuck worm, but there were no escapin’ that grasp. The Titan was just standing there, motionless as a statue. I watched them go down, down into the darkness.

Why spare me? Don’t rightly know. Perhaps I was the only one to make an offering. Or maybe Nautilus wanted someone left alive, to tell the tale. But on the darkest Bilgewater nights, when the murder-fogs roll in, ye might hear ‘im wading out from the shallows, slow and steady like, draggin’ that accursed anchor in his wake...

Want my advice, friend? Keep a coin in your pocket, and always pay the Tithe. And don’t trust no captain who says he’s done it, ‘less you seen it for yourself.

After all, ye might not be so lucky as me.

Lore and Events
Retrieved from "https://leagueoflegends.fandom.com/wiki/The_Ophidian?oldid=2719086"
Community content is available under CC-BY-SA unless otherwise noted.