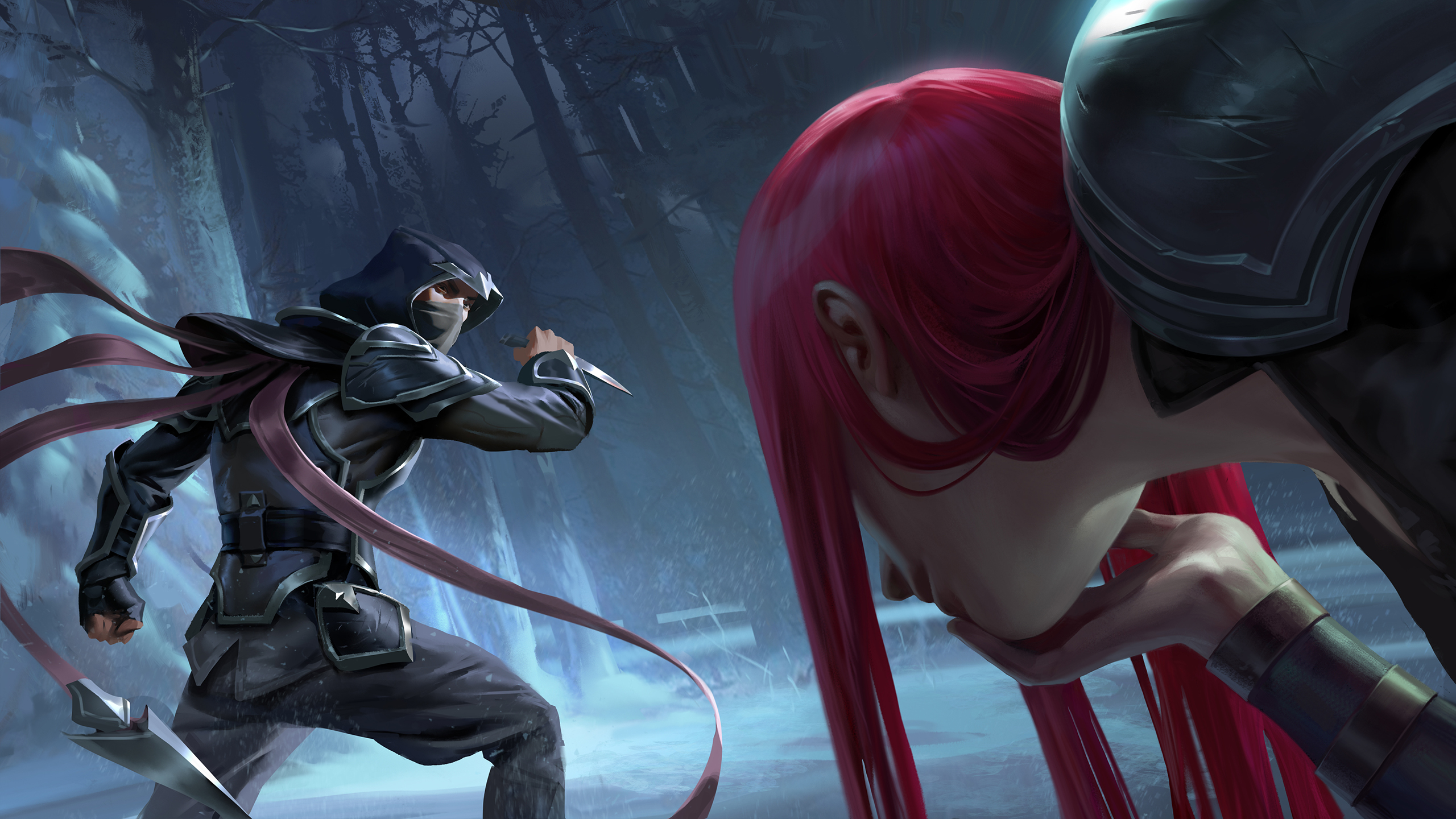 The tang of fresh blood rises up to me, my back pressed into the shadows while I study

She was driven here, a large chamber, decoratively appointed, two exits, but through wide halls and high arched ceilings it was easy enough for me to follow her, and do it in silence. Her pursuers did not, a charging crash of weapons and armor brought to bear against her. To the uninitiated she appears trapped, and a cornered assassin is a dead one, but I know well that her blades are but one of her weapons, and far from her keenest.

I recognize the hidden patterns of her strikes, thought translating seamlessly into action. The subtle movements masked by grander gestures as she adapts to exploit every weakness presented to her. I know the teachings that inform her violence, because they were taught to me as well. Wisdom passed down to only a handful, forging a family of purpose, if not of blood.

It is her birthright, while for me it was earned in darkened alleyways, and the frothing chokes of slit throats. I see her follow the principles of our teachings, and then I see her break them.

Her target appears, and she allows them to see her before the strike comes. There is flourish to the killing. Noise. Arrogance. Wasted energy. Each choice exposes her more, cracking her armor wider, betraying her lineage. My upper lip constricts, desperate to twitch, but I am stone. Succumbing to such weakness would only carry me further from the Edge.

I have seen such ambition before. As a child in the world beneath the empire, I watched the ambitious rise head and shoulders above their fellows, just high enough for all to see them, standing out from the masses. And then I watched the masses butcher them for it.

I learned the sanctuary of shadow quickly, the shield that silence can be, and never forgetting that has kept me alive. I watch her defy them both, blundering to the precipice of failure. And it would not be the first time. I remember—

—the cold of the forest, the glittering frost on the branch where I perched, watching. Waiting for her to appear.

When she did, she was wreathed in the ashen smell of the battle cooling just beyond our view. It clung to her as surely as her failure. There is always a price for failure. That day, for her, I had been made that price.

I planned it all perfectly. I wouldn’t allow myself anything less. The slope of the ground, the strength and direction of the wind whistling through the trees. Her bearing, her garb, her weapons, and her gait. The small, clean blade held in fingers etched with a thousand tiny scars of imperfection. It all passed through my mind, before I was free to unfold. To strike.

There was no sound when I descended. My blade cut air, was interrupted, air again. Blood trailed behind its path, a sluggish bloom of darkest red uncurled into icy air.

My momentum carried me past her, as I planned. I looked back, my mind calm. What trophy would be proof enough? Her blades? A lock of hair? Her eyes?

She should not be alive. I told her so. The words did not fell her, so I said them again. I screamed them at her.

She answered with the edges of her blades.

We fought, or rather, she fought. She was a blur of red hair and flashing silver, her cuts and slashes propelled by pain, skill, and rage in equal measure. Anger twisted her features, keeping the wound I gave her from closing.

I flowed around her, cold and colorless against her passion. Three times she came close to opening me to the bone, to emptying my lifeblood upon the frosted earth of the forest floor, but emotion betrayed the blows early enough for me to displace myself. The instinct was there, but she did not plan the engagement, and so I kept my blood within me.

I glimpsed an opening, once, where I could have ended her. She would have fallen, for true this time. Nobody would have known of my mistake, nobody but me.

I saw the opening, but I let it pass me by. After my failed strike I would not try a second, and should I have fallen to her, it was deserved. I was now no different than she was.

She watched me as I put my blade away, and she stopped.

She touched her face again, tracing a wound that would never leave her. Breath feathered out from the cold, angry slashes from her nose as she spoke. Her own failure that brought me here loomed over her, and she was resolved to set it right. To atone for it.

I could not bring myself to stand in her way, not anymore. The hypocrisy would be too great. My duty was to return and face judgment, and see what price I had to pay.

Before turning back toward the battlefield, leaving the way she came, she asked me who I was. She did not ask if her father sent me, that much was clear to her—all but the name of the blade he sent.

I did not have an answer for her. My name had never mattered. I told her so, but saw she would not relent. I thought back, remembering the world under the empire then.

Down there, in those final, blood-soaked days before I left it all behind, they called me

Blood spreads out across the stones from her target, now her kill. I watch her make quick work of the soldiers who remain to challenge her. I imagine myself in the place of the last of them, seeing the openings he does not, before his head rolls from his shoulders and he joins the dead.

For a handful of seconds she admires her work. She is smiling, the pale scar bisecting her left eye flexing. The smile goes cold—does she sense me?—before she disappears down the corridor like smoke.

I wait a moment, two, and then I allow myself to breathe again. Muscles clamped tight for hours loosen a fraction. Only now, with her gone, do I produce the knife.

My fingers are pebbled with a thousand scars, each a single tiny step on my path toward the Edge, that unattainable perfect state I strive for. I spin the knife in a quick, practiced orbit, then again. And again. The blade is clean, the blood that once graced it on that day long since crumbled away, waiting for the day I might be made the price for her failure again.