League of Legends Wiki
Register
Don't have an account?
Sign In
Advertisement
in: Lore of Ixtal, Short Story, Neeko lore 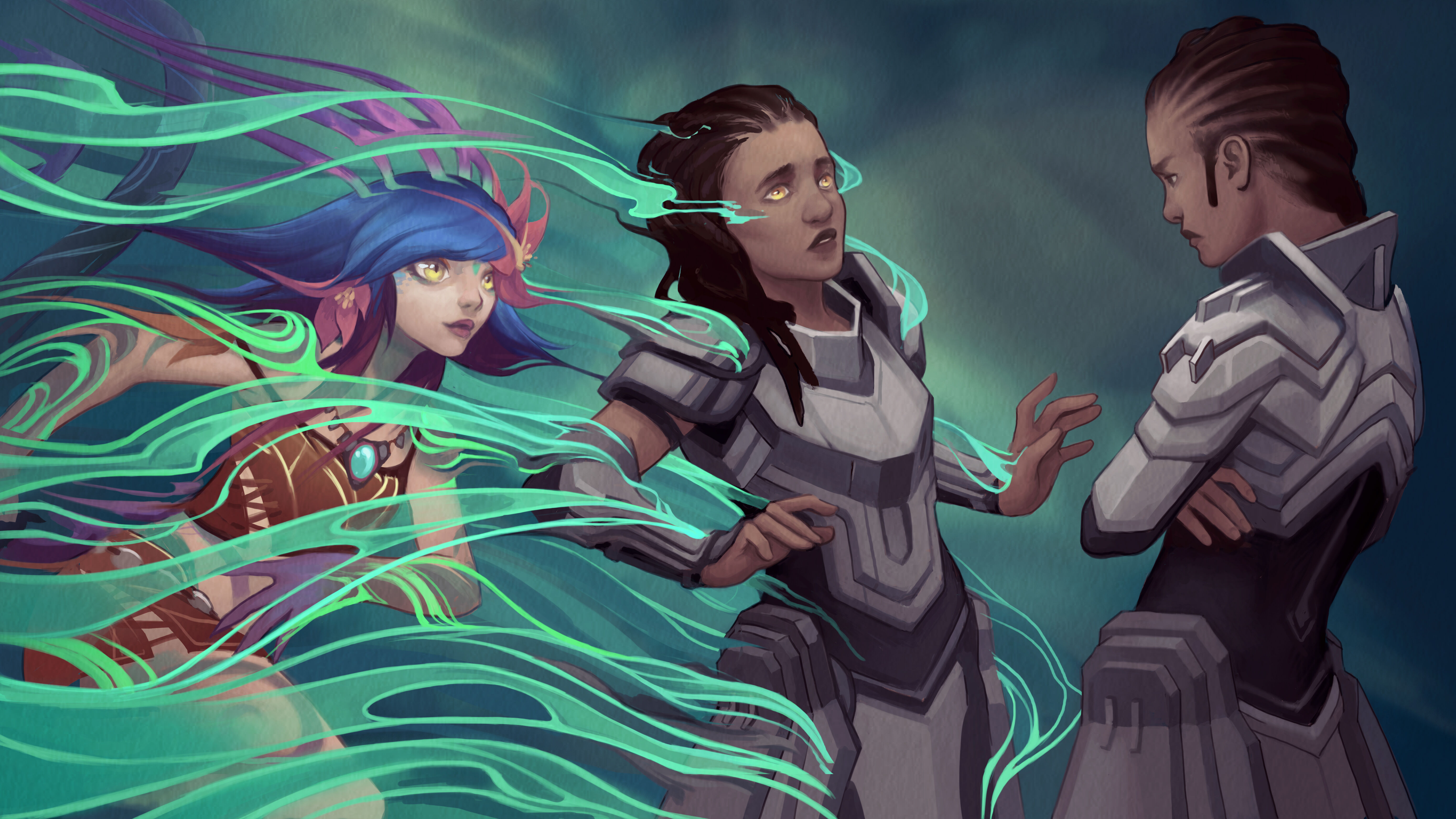 The ugly compound was carved into the cliffs near the outskirts of the jungle by a tribe of humans called “Noxians”. They had inhabited the outpost for a while, it seemed, based on how irritable yet comfortable they seemed performing their daily routines.

Neeko wondered… were they friendly? Did they enjoy cheese breads? There were other questions, too, but these were at the top of her mind when she decided to see for herself.

Under the cover of night, she slinked in and out of shadows until she reached the gate. A single guard stood watch. This was not a problem at all. Neeko loved disguises! Adopting another entity’s shape meant sharing their sho’ma—a complex web of emotions and recent memories.

She reached out with her own sho’ma, feeling for the outer boundary of the guard’s aura, which extended far beyond her body. When her spirit met the guard’s, a name floated to the surface of Neeko’s mind: Ewaii. From across the desert. A flavor-color came next. Burnt-orange bitterness over her lost home still graced Ewaii’s mind, and the blue-salt resentment about her station: the backwater-nowhere outpost with no strategic value, but try telling the commander that. This Ewaii had dark skin and beautiful oval eyes. She was strong, but few took her seriously since she was a “mud-heel”—a simple soldier. Fascinated, Neeko shed her natural, chameleon-like appearance for Ewaii’s shape.

Neeko’s skin swirled as her body morphed. It tickled her, but dizzied Ewaii. She used the guard’s disorientation to slip beyond the gates and into the quiet corridors of the outpost, firmly incognito.

“Ewaii!” a shrill voice cried. “Get back to your post!” The rotund man, his belly poking out from under his breastplate, seemed startled. In the crook of his elbow were several toasted taffa roots and two loaves of crusty bread.

“I heard noises.” Neeko put on her best impression of Ewaii’s voice.

“It’s probably bloody furtails. Better hunt them down. Then we can enjoy some furtail pie.”

“Not furtails!” Neeko did not want to eat those curious, funny little creatures.

“Are you saying there’s an intruder?” The man’s eyes widened.

Neeko did not know the meaning of this word. So she shrugged and nodded yes. This gesture, she figured, could surely lead to little trouble.

“Wilderfolk,” he said. “Could be a scouting party. What are you doing here? Raise the alarm!”

“Have you lost your brain, Ewaii? I’ll do it. See the physician when this is over.”

With that, the heavy man scurried off, cramming his snacks into his pocket. But before he was gone, Neeko mingled her spirit’s motes with his, borrowing his shape, shedding Ewaii for this, this… Yubbers?

“Yubbers!” Neeko-as-Yubbers said out loud. That was a fun name to say. Yubbers did not like to be near the frontlines of war, so Kalduga was a quiet and welcome assignment. His strength was in corresponding with the empire. He was now scared—a rubbery, ashy yellow—at the thought of an attack by the wilderfolk. Neeko liked this man, but not the feeling of the masculine sho’ma. Too… not Neeko. Most importantly, she felt Yubbers’ shock of running into another soldier after he had raided the larder. Food was nearby.

As she headed down a hallway filled with doors, behind one of which must be the larder, Neeko heard a commotion out in the main yard. Loud voices shouting. She dashed to the nearest window and peered outside. Real-Yubbers was shouting at Real-Ewaii. Uh-oh.

Every door in the hallway burst open. Several half-dressed Noxians charged out, their eyes blinking away sleep. She tried to avoid the stampede, but was swept along, away from the larder. Neeko-as-Yubbers found herself pushed out into the yard with about a dozen armed soldiers.

“I don’t know what you’re talking about!” Ewaii’s face was stressed and defiant. “I’ve been standing guard all night long!”

“You were in the barracks,” said Yubbers, flanked by two soldiers. “Take this deserter to the brig.” He pointed to Ewaii.

Before Yubbers and other soldiers deduced whether their double vision was the byproduct of the late hour or not, Neeko disappeared into the fog of another person.

This time, it was a warrior named Seda. She was a killing machine, so vicious! Spicy pink! Seda had rushed to the yard so fast she neglected boots. This was fine by Seda—and Neeko—as both liked going barefoot. It reminded Seda of the sun-scorched province where she was born. Agile. Silent…

Just as Neeko was thinking she could enjoy being Seda, Real-Seda leapt at her doppelganger.

The two Sedas wrestled in a ruckus of soldiers, fighting and pulling at each other. When the commotion settled, only one Seda remained. Of course, it was the real Seda, but Yubbers had her placed in chains. Seda pointed out that two Yubbers had been seen and he, too, was placed in chains. Then Ewaii.

This continued for a while. Chains went on. Chains came off. Nobody was sure who was who, and who was not who, and who was lying about not being who they were when they were really someone else. Even the outpost commander seemed uncertain what the source of all the trouble was, and Neeko didn’t take his shape at all! This fact came to light and only fueled more suspicion. Was the commander secretly harboring some monster?

The one thought that everyone shared, Neeko had learned from being everyone, was that no one liked the commander. He was too secretive, and weak-willed. He had lost an important battle and been demoted to, as Ewaii put it, this “backwater-nowhere outpost with no strategic value.” Everyone turned on the commander, and he was the first to die.

The mess only got messier from there. Soldiers screamed and fought and pointed blame. Some believed they were ensorcelled by a soul-eating demon. One veteran ranger told a harrowing tale of a jungle plant-monster that replaced people with mindless copies of themselves, with vines for veins.

Amidst accusations, elaborate quizzes of miniscule facts from times shared in training, and shouts of “Traitor!” Neeko tried to calm the troops.

“What if,” Neeko-as-a-cook-named-Thomsy said, “it is no monster? It is someone who is nice, lost, and a little scared, but just wants to make friends and eat cheese breads and be happy? Yes?”

Everyone in the Kalduga outpost knew at once this was the imposter. Swords came out and the stabbing began. By dawn, only four soldiers remained alive. They stared hollow-eyed at the blood pooled under the commander’s dead body, and at each other. Neeko watched them from the safety of the larder.

“The commander did not want us to abandon the outpost,” Seda said. She knelt down by the body and blessed him with a gesture of her people. “Exile or execution is our future.”

A moment of solemn silence passed through like a haunted, foul wind, despite the floral notes of taffa flowers blooming somewhere nearby.

Yubbers straightened up. “We’ll send a messenger bat to command. ‘The wilderfolk have overrun Kalduga. We do not expect to survive, but we will die for the glory of Noxus.’ Then we abandon the outpost. Leave the bodies where they lay. Seda, you go north. Gurnek will go east. Ewaii west. I’ll head south. If any one crosses paths with another, it is a duel to the death, for one of you—”

“—is the beast in disguise.”

The soldiers left an hour later. They did not look back at their abandoned post, or each other, as they went their separate ways, unsure of who was really who.