League of Legends Wiki
Register
Don't have an account?
Sign In
Advertisement
in: Lore of Shadow Isles, Lore of Bandle City, Short Story,
and 2 more 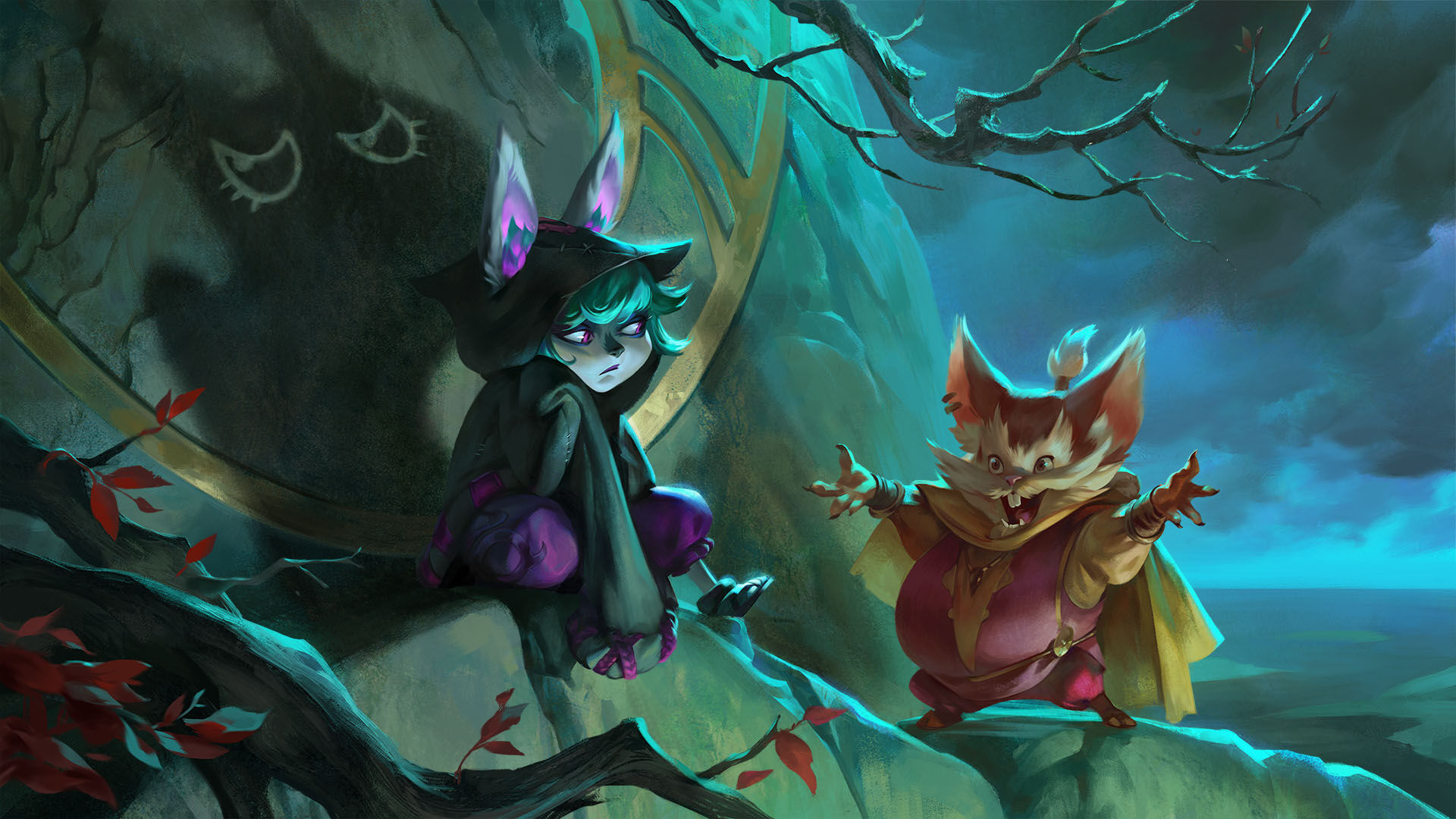 It was midday on the island, and Vex was just emerging from her previous night’s sleep.

It was midday on the island, and Vex was just emerging from her previous night’s sleep. The Black Mist that blanketed the

Shadow Isles was especially thick today, creating an atmosphere of despondency that suited her perfectly.

The grisly host of specters surrounding her released a chorus of blood-curdling shrieks and hisses, hoping she might be in the mood to engage them on this exceptionally dismal day.

“You wanna play again?” Vex sighed. “Fine. I’ll do it. But someone else has to be the

From her back, Vex heard her shadow volunteering.

Shadow looked at her with sad, hopeful eyes.

“Whatever. Even though this is completely stupid, me and Shadow will be gravedigger. Everyone else, go die.”

Covering its eyes with its hands, Shadow began to count to one hundred as the host of specters scattered to find hiding places in the rocks and ruins that dotted the island. Vex, her eyes uncovered, could see something peculiar bobbing through the haze in the distance. It looked like... a pair of pointy ears?

“Small fry!” called a voice from just beneath the ears. “Are you here, yordling?”

The pointy ears continued bobbing toward her until, at last, the figure beneath them came into view. An older yordle stood before Vex, his arms splayed in excitement.

“There you are, yordling!” he said.

Vex’s eyes narrowed contemptuously at the familiar face. “Uncle Milty, what are you doing here?”

“What do you mean? Can’t a grown yordle pay a visit to his small fry?” said Uncle Milty with unrelenting cheer.

Vex noticed her spectral peers were beginning to emerge from their hiding places, curious about the new visitor.

“I’m kinda busy,” Vex said to her uncle. “Can you just tell me what you want and get outta here?”

Uncle Milty’s face melted, its stiff, resilient smile changing to a grave look of concern. “Very well. I won’t lie to you, small fry—it’s your parents.”

Vex’s eyes rolled so hard they nearly fell from their sockets. “Ughhhhh, what about ‘em?”

Why did Uncle Milty even care what her parents thought? He wasn't her real uncle, anyway.

“They’d never tell you this, but... they’re worried sick about you!” said Uncle Milty. “You’re off living in some... drab stinkhole. Cavorting with ghosts. You have to come home.”

“Just for a visit? Just to show them you’re okay.”

Uncle Milty’s brow furrowed at her resistance. A moment later, his beaming smile returned, and a twinkle sparked in his eye.

“Well, I can see there’s only one thing to do here…” said the old yordle. He wiggled his fingertips, moving his hands in an arc around his body. A large rainbow portal opened before him. “Let’s not tarry. Your parents are just about to sit down for tea. We can join them if we hurry!”

Vex winced as Uncle Milty pulled her toward the magic gateway. Thinking quickly, she raised her hand, summoning a thick, black shadow at their feet, snuffing out the brightly colored portal. “If you think I’m walking through that thing, you’re even more clueless than I thought.”

Uncle Milty raised one of his bushy eyebrows high in befuddlement. “But—small fry, look around you. This place is for... dead things.”

“Duh. That’s why I’m here,” said Vex. “People suck. Yordles really suck. Colors make me wanna puke. And this place has none of those things.”

Uncle Milty stammered, stunned by his niece’s words. Then realization began to wash over him, and the twinkle returned to his eye. “Ohhhh, I know what this is. You’ve been away from the Bandlewood for too long! You’ve lost your yordle spirit. All you need is a couple days back home, and you’ll be right as rose hips!”

He wiggled his fingers, conjuring the rainbow portal once more.

Vex felt the very bottom fall out of her soul as she realized her eternal plight: she was a yordle, would always be a yordle, and would forever be tormented by their undying enthusiasm.

A thought popped into Vex’s mind. She nearly smiled as she realized it just might be the solution to this torture. She quickly suppressed the smile and summoned her true malaise, full strength, and gazed at the ground. “What’s the point, Uncle Milty?”

Bandle City, yordles... life?” She looked up from the ground to see her uncle’s smile fading.

Seeing her uncle at a loss for words, Vex eagerly answered the question for him. “I mean, we’re all just random wads of magic. Who we are, what we do, who our family is—we don’t decide any of it. We’re all just drifting by like dead leaves with no control over anything.”

A strange look of determination came over Uncle Milty. “Oh, I don’t think that’s true. What about making people happy? We all have the ability to do that!”

“I guess. But their happiness never really lasts, does it?”

Vex could feel her words knock the wind out of Uncle Milty’s sails as his long, perky ears began to droop.

“It’s like everything else in this world,” she continued. “Happiness, birds, trees, bugs… rainbows—they all fade away. I guess you could say that’s their purpose. They hang around for a few minutes, and then die. Just ask all these chumps here.”

Vex motioned toward her spectral friends, who were poking their gruesome, withered faces out from their hiding spots. When she turned back to her uncle, she could barely see the edges of a frown forming on his lips.

“I guess I never… thought of it quite that way,” said her uncle.

Vex reached into her bottomless well of despair, hoping to drive the stake of misery deeper into his heart. “I know it’s a downer, but the whole point of life… is death.”

“Yeah. And the worst part of it all? Yordles don’t even get to do that. We just go on forever. Doomed to a stupid, magical, pointless existence.”

Uncle Milty’s lip quivered. Tears that shimmered like diamonds trickled from his eyes. The rainbow portal behind him evaporated into the surrounding darkness.

Suddenly, Uncle Milty erupted in uncontrolled sobs. They came like thunder, scaring off even the ghastliest of the wraiths lingering nearby.

As her uncle ran away crying, Vex breathed a deep sigh of relief, the burden of intrusive cheer no longer weighing on her tiny, slouching shoulders. “Okay,” she said, “you can all come out now.”

One by one, her spectral comrades emerged from the rocks and ruins around her.

“One more game,” said Vex. “And sure, why not—I’ll be the gravedigger.”