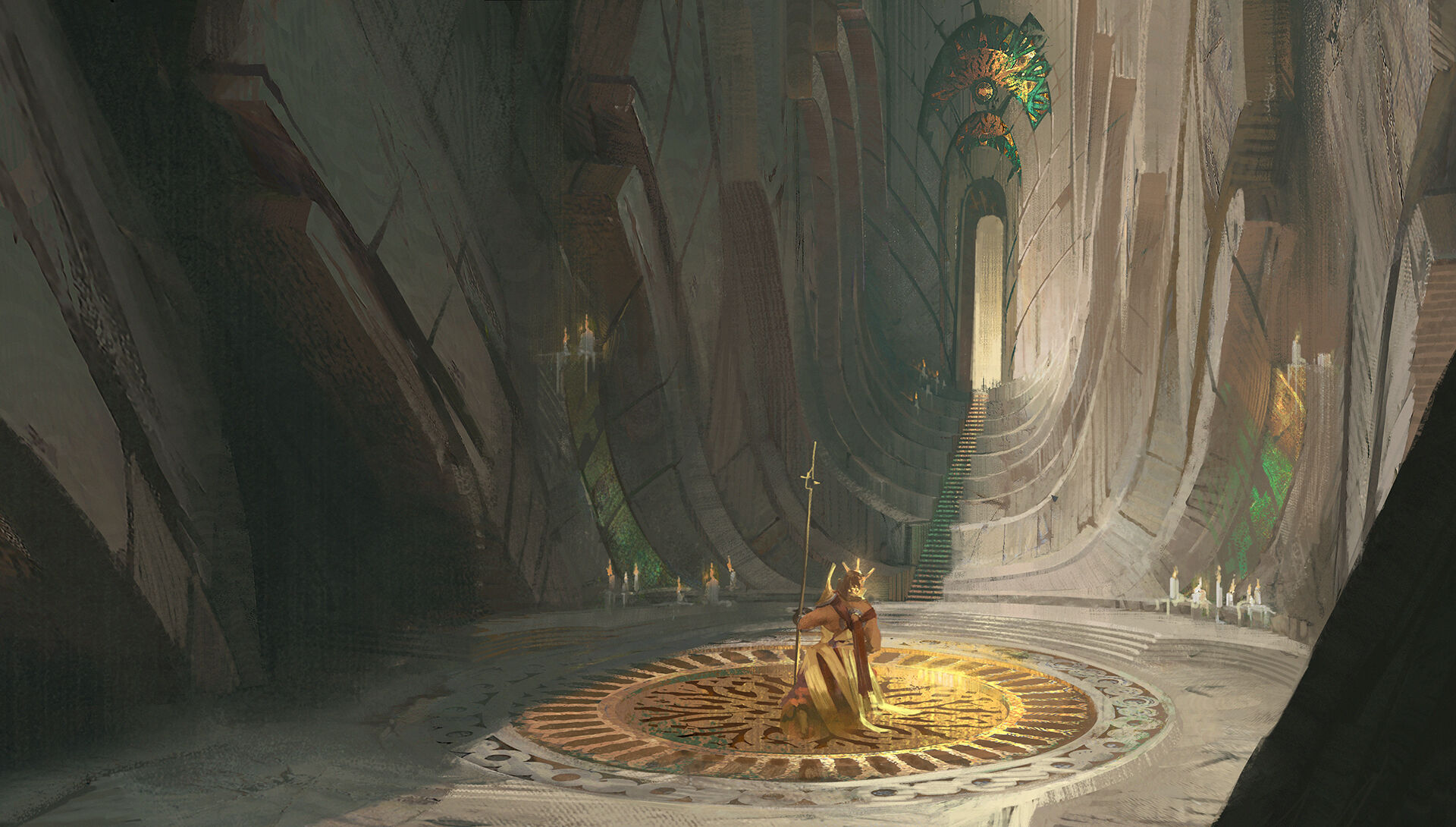 The previous settlements had been easily overcome; little challenge for men weaned on battle. The spoils were few and far between, but in this strange land, a man took what he could get.

This one would be no different.

Impossible. Dawn was an hour or more away.

The leader raised a callused hand as he saw a lone figure standing athwart the settlement's street. He grinned as he saw it was a woman. Finally, something worth plundering. Light inflamed her, and the grin fell from his face as he stepped closer and saw she was clad in ornate warplate. Auburn hair spilled from a golden circlet and sunlight glinted from her heavy

More warriors emerged from the street, taking their place to either side of the woman, each gold-armored and bearing a long spear.

"These lands are under my protection", she said.

Leona lifted her sword as the twelve warriors of the Ra-Horak formed a wedge with her at their center. Six to either side, they swung their shields and hammered them down as one. Leona made a quarter turn and locked her own shield into place at the apex. Her sword slid into the thrust groove beneath the shield's bladed halo.

She flexed her fingers on the leather-wound grip of her sword, feeling the surge-tide of power within her. A coiled fire that ached to be released. Leona held it within her, letting it ease into her flesh. Embers flecked her eyes and her heart pounded in her chest. The being she had joined with atop the mountain longed to burn these men with its cleansing fire.

Dragon-helm is the key. Kill him and the rest will falter.

Part of Leona wanted to give the power in her free reign; wanted to scorch these men to smoldering bone and ash. Their attacks had killed scores of people who called the lands around Mount Targon home. They had defiled the sacred places of the

Solari, toppling sacred sun stones and polluting the mountain springs with their excretions.

Dragon-helm laughed and swung his greatsword from his shoulders as his men moved away from him. To fight with such a huge weapon and keep it in constant motion needed space. He yelled something in a guttural tongue that sounded more like animal barks than anything human, and his warriors gave an answering roar.

Leona let out a hot breath as the raiders charged, their braided beards flecked with frothed spittle as they pounded toward the Ra-Horak. Leona let the fire into her blood, feeling the ancient creature merge its essence with hers more completely, becoming one with her senses and gifting her with perceptions not of this world.

Time slowed for Leona. She saw the pulsing glow of each enemy's heart and heard the thunderous drum-beat of their blood. To her, their bodies were hazed with the red fires of battle-lust. Dragon-helm leapt forward, his sword hammering Leona's shield like a stone titan's fist. The impact was ferocious, buckling the metal and driving her back a full yard. The Ra-Horak stepped back with her, keeping the shieldwall unbroken. Leona's shield blazed with light and Dragon-helm's mantle of fur smoldered in its furnace heat. His eyes widened in surprise as he hauled his enormous sword back for another strike.

"Brace and thrust!" she yelled as the rest of the raiders hit their line. Golden spears thrust at the instant of impact and the first rank of attackers fell with their bellies pierced by mountain-forged steel. They were trampled underfoot as the warriors behind them pressed the attack.

The shieldwall buckled, but held. Axes smashed down, sinews swelled and throats grunted with the effort of attack. Leona thrust her sword through the neck of a raider with a scar bisecting his face from crown to jaw. He screamed and fell back, his throat filling with blood. Her shield slammed into the face of the man next to him, caving in his skull.

The Ra-Horak's line bent back as Dragon-helm's sword slammed down again, this time splintering the shield of the warrior next to her. The man dropped, cloven from neck to pelvis.

Leona didn't give Dragon-helm the chance for a third strike.

She thrust her golden sword toward him and a searing echo of its image blazed from the rune-cut blade. White-hot fire engulfed Dragon-helm, his furs and hair instantly igniting and his armor fusing to his flesh like a brand. He shrieked in hideous pain, and Leona felt the cosmic power inside her revel in the man's agony. He staggered backward, somehow still alive and screaming as her fire melted the flesh from his bones. His men faltered in their assault as he fell to his knees as a blazing pyre.

"Into them!" shouted Leona, and the Ra-Horak surged forward. Powerful arms stabbed spear blades with brutal efficiency. Thrust, twist, withdraw. Over and over again like the relentless arms of a threshing machine. The raiders turned and fled from the Ra-Horak's blood-wetted blades, horrified at their war-leader's doom. Now they sought only to escape.

How and why these raiders had come to Targon was a mystery, for they had clearly not come to bear witness on the mountain nor make an ascent. They were warriors, not pilgrims, and left alive they would only regroup to kill again.

Leona could not allow that and thrust her sword into the earth. She reached deep inside herself, drawing on the awesome power from beyond the mountain. The sun emerged from behind its highest peaks as Leona thrust her hand to the light. She dropped to one knee and slammed her fist on the ground.

sunfire rained from the sky.

Lore and Events
Retrieved from "https://leagueoflegends.fandom.com/wiki/The_Light_Bringer?oldid=3088704"
Community content is available under CC-BY-SA unless otherwise noted.