For its predecessor, see

"It must do something...
Declined, it does EVERYTHING!"

Unique – Doing Something: You are permanently

The Golden Spatula was a legendary item in

League of Legends. It was exclusive to Nexus Blitz. 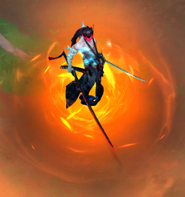