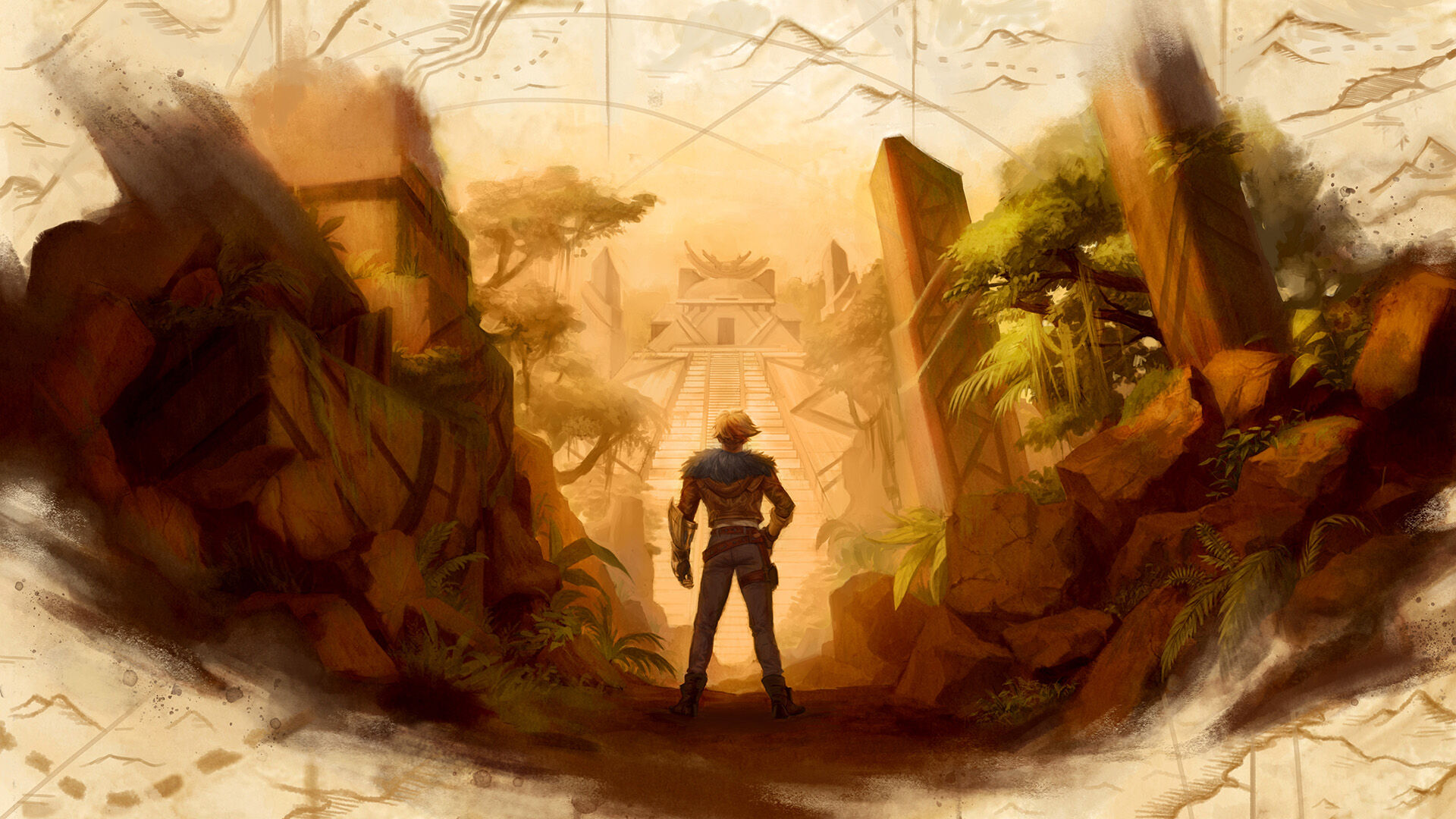 I step through a stone archway and clouds of dust rise like phantoms, revealing a pathway of circular patterns carved into the rock. This tomb is rumored to be impenetrable, uncrackable, and deadly. No explorer has yet escaped with their life, but then, none of them have been me.

Dozens of lidless stone eyes leer at me from the walls. Well, I'd leer too. I doubt they've seen anyone this astonishingly handsome since the last Rune War.

At the center of the room, a crystal vial rests on a pedestal. It shimmers with lambent fluid, casting tiny rainbows on the floor. That's what I'm here for. Many will dismiss a grandiose tale of bold adventure as pure fiction, but there's no denying a physical artifact. Collecting legendary treasure proves beyond doubt you've conquered the impossible.

The Elixir of Uloa is sought after by cults hoping it will imbue them with immortality, withered dynasties looking to reclaim power, and pilgrims seeking wisdom beyond belief. Quite a lot to promise for a vial whose contents wouldn't fill a teaspoon.

I know every trap in the book will trigger as soon as I lift it from the pedestal. That's the nature of places like this. I flex my fingers and the gemstone at the center of my gauntlet glows a satisfying cerulean blue. Now the real fun begins.

I approach slowly. A stone trembles underfoot and I step back to avoid activating a trigger. I pick my way across the room, only stepping on the most immobile stones. As my fingers close over the Elixir, deep cracks split the stone floor of the chamber. I activate my gauntlet, charging it with magical energy. Swirling rays of light overwhelm my vision as I

teleport to the archway fifteen feet away. Not a second too soon. Hundreds of knife-sharp stakes cascade from the ceiling, missing me by a hair's breadth as the entire room collapses into a shadowy crevasse below.

My gauntlet's power is perfect for tight spots, but doesn't lend itself to crossing great distances. And takes longer than I'd like to recharge.

A thunderous boom shakes the walls and echoes down the corridor. Sounds like the ancient foundations of this tomb won't hold much longer, so it's time to speed things along. I prefer my ground strictly solid, with a generous helping of reliability, so I sprint down the tunnel as widening cracks obliterate the floor behind me.

I chase the directional marks I chalked when I entered the tomb, sliding beneath collapsing archways, leaping over boiling quicksand, and dashing around colossal boulders rolling in to block this ever-narrowing passageway.

The wall to my right splits apart and a barrage of colossal insects tumble through, giant pincers snapping and venom dripping from their jaws. Thousands of red spider eyes gleam with hunger while scorpions scuttle forward with stingers poised. Jungle vermin are a damn nuisance, but I've got just the remedy!

I close my eyes for a split second. Energy flows down my arm, jangling my nerves with a pulsating beat as I concentrate power into the gem. I steady my gauntlet and aim it at the largest spider. As the monster opens his jaws I unleash a blazing

ray into its mouth, blasting it back into the crawling horde. The smell of burned chitin stings my throat and my stomach churns.

I turn and run, firing blinding

beams of light behind me at every twist of the passageway. A slab of rock the size of a house breaks from the ceiling directly overhead. My gauntlet recharges just in time and I

reappear ten feet ahead in a whirling spiral of light as the tunnel behind me collapses.

Two toppling pillars fall toward each other and I slide between them a moment before they smash to dust. I dash into a chamber with a floor angled toward the surface.

A sliver of sunlight shines ahead, and I grin as I bolt for it. Freedom is close. The ground shakes with a deafening rumble and I stumble mid-run as the chamber falls apart in front of me. Freedom was close.

Then again, backup plans are a particular specialty of mine.

I ready my gauntlet and concentrate all my energy into the gem. I feel it drawing power from me. My vision blurs and the world seems to tilt as the gem fills with magic. The gauntlet pulses the blue of a clear sky.

I open my hand and a brilliant

arc of golden light as wide as the tunnel bursts from my palm. The force of the blast staggers me, but I maintain my focus. The light blazes in a continuous glowing channel, gleaming brightly as it disintegrates everything in its path, leaving a precariously narrow gap. My favorite kind of gap!

I close my hand into a fist and the tunnel darkens once more. The ground lurches unpleasantly, sending me to my knees. I'm so spent I can barely move, let alone stand. Inches from my face, cracks spread across the floor faster than I can track them. Not good. The tomb won't hold much longer, so I muster my remaining strength and rise, sprinting to what I dearly hope is safety.

I'm losing sight of the sunlight. Another crash - the walls crumble around me. I close my eyes and dive through the hole. Nothing wrong with hoping for a bit of good luck, and I am exceptionally lucky. I hit the ground, roll to my feet and inhale the sweet air of the jungle.

Behind me, the entrance to the tomb caves in completely, releasing a billowing cloud of ancient dust. I brush the dirt from my clothes, toss my hair out of my eyes with a well-practiced flick and walk away.

Another impossible ruin traversed. Another treasure to prove the truth of my daring tales.

And all before lunch.

Lore and Events
Retrieved from "https://leagueoflegends.fandom.com/wiki/The_Elixir_of_Uloa?oldid=3088701"
Community content is available under CC-BY-SA unless otherwise noted.