League of Legends Wiki
Register
Don't have an account?
Sign In
Advertisement
in: Lore of Shadow Isles, Lore of Noxus, Lore of Bilgewater,
and 7 more
English 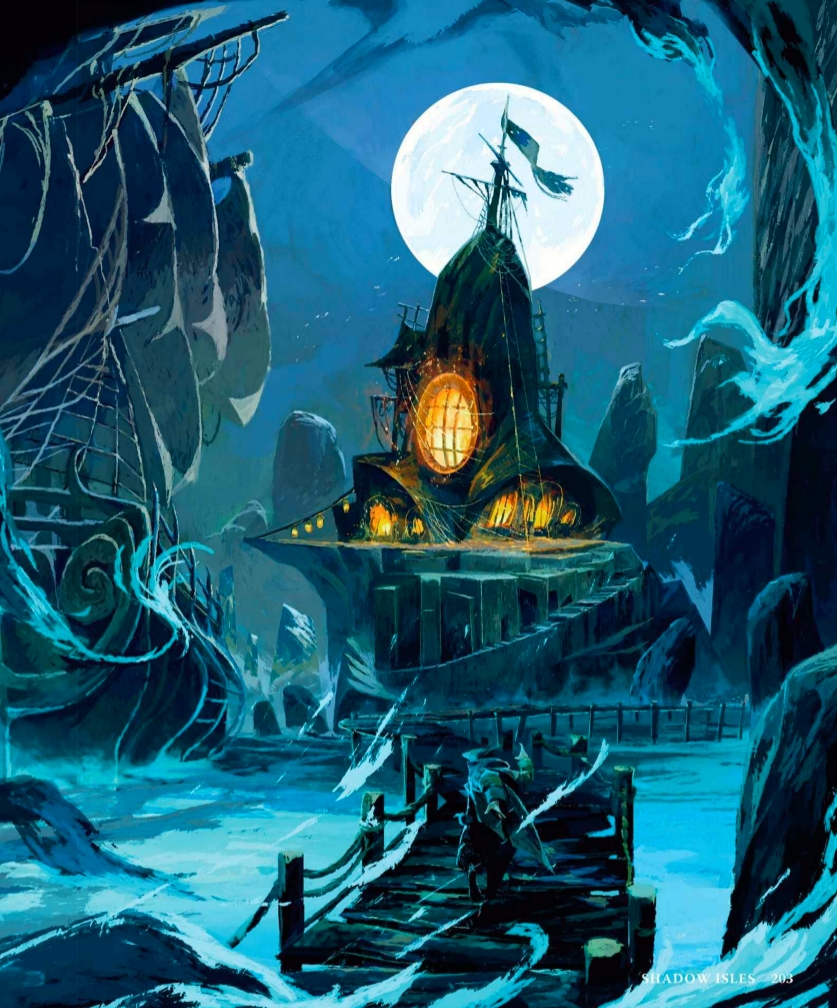 Fayette is out on the dock of her island, waiting for her guests to come back to the inn, the Daring Darling. The first to return from the Shadow Isles are usually the most experienced treasure hunters since it is dangerous to stay for too long and get caught by the wraiths.  This time, her friend Gavin arrives first. He has stayed with her since he emigrated from Demacia almost ten years ago. She greets him like every day, moors his boat, and asks if he has anything important for the Vault. The Vault is the most important service Fayette offers on this island. Years earlier, she had stranded here and found a vault of black steel that only one key can unlock. That single key is hidden under the hook she got instead of her lost arm. When she returned, she built the inn here, to offer rest and storage to treasure hunters between Bilgewater and the Shadow Isles. The next ship to arrive is from Madam Saba, an Ionian priestess with three of her acolytes. They found the item that she was looking for, and reveal that it is a bell that can fling the Spirit Realm into chaos. As they bring the bell inside into the Vault, Saba explains what it does: Magic rages unchecked, then a vile silence, like the crash of a wave, as the tone fades.

In the evening, most of the boats have returned. Some of Fayette’s guests are arguing: Vaquer, a Piltovan fixer, and Jolera, a Noxian merchant, apparently have a problem with Kesk, the vastaya in the room above them. He’s dancing and singing Ionian marching songs, which especially the Noxian doesn’t approve of. Madam Saba interjects that there is nothing wrong with Ionian songs, and the argument almost escalates into a fight. Fayette mediates between her guests, and wants to prepare dinner. Before that is the last opportunity to store something in the Vault, but no one has anything noteworthy to store. But just as she wants to prepare dinner, there is a scream outside. The Harrowing comes.

Everyone makes their preparations to leave for Bilgewater as soon as possible. Fayette is always ready to depart, she checks and prepares her ship every morning. But before they can leave, they have to complete the Final Toast, a tradition of the treasure hunters: A celebratory drink on one another's continued survival. All twenty-five living souls on the island gather. Six treasure hunters, fifteen sailors for hire, three Ionian acolytes, and Fayette herself. Everyone gathers around the bar, and Fayette asks if someone needs something from the Vault. The treasure hunters discuss what they are looking for. Gavin has a couple of artifacts in the Vault, but no time to move them. Kesk is looking for an amulet that contains the soul of a dead captain who knows where treasure is hidden. Jolera says she has nothing, but Fayette knows this is a lie. Vaquer also claims he hasn’t found his loot yet. The last guest, a

silent noxian aristocrat comes down from his room. He is oddly calm with the prospect of a Harrowing outside. Now everyone is together. As the oldest hunter, Gavin has the honor to toast, but before he can begin, all lights go out. In the dark, a struggle ensues. Behind the bar, Fayette replaces her hook arm with a sword arm and calls to stop the fight. The Noxian lights a lamp and they examine the aftermath. Gavin had to kill a sailor who came for him, everyone else got off lightly. Vaquer is surrounded by glowing bear traps, he reveals that he did find them on the isles today. They trap the spirit, not the body. The aristocrat asks what happened to the lights and they find out they were extinguished by blood. Jolera says that this must have been a distraction and they run out to check the ships. All of the moored ships are wrapped with red-black chains, leaving them trapped on a tiny island during a Harrowing. The Noxian remarks that everyone was present for the ritual, so the saboteur must still be among them.

Back inside, they start accusing one another. Gavin wants to free the ships with the sailors. Saba joins him. Kesk, Vaquer, and Jolera leave for their rooms. The last one left with Fayette is the aristocrat. He admits that this is his first Harrowing, but he has read all about them, and he suggests to open the vault so they can use the weapons. Fayette refuses to betray the trust of her customers, and, finally, asks for his name. He says that he is called Vladimir.

They check on the guests on the second floor together. Vaquer laid out his traps in front of the door and says he is safe because they trap spirits too. Vladimir reminds him that they can walk through the walls. Next, they check Jolera’s room, but she pretends she isn’t even there. So they head up the stairs to the third floor to question Kesk and find another dead sailor on the way. The vastaya summoned a ghost from the locket which he did find. He has seen something in the Harrowing outside that has caused him to go mad. He also accuses the two of them, and refuses to banish the spirit. Fayette attacks the spirit while Vladimir takes care of Kesk. The ghost vanishes once Kesk is dead, but Fayette didn’t see how Vladimir killed him. He isn’t even holding a weapon. Again, he suggests to open the vault, and Fayette refuses. They go back to the ground floor. Gavin and the sailors from outside retreat into the bar, as the spirits arrived before they could free the boats. Saba says it must be the Piltovan or the Noxian merchant casting the spell, and Jolera comes down the stairs. She demands her weapon from the vault and then plans to leave. The sailors tie her down on a chair and interrogate her. Madam Saba says that she can sense if she is casting the spell, and Gavin doubts that. Back in Demacia they had

a boy, but… Saba ignores him, she concentrates and concludes Jolera can not use magic. The captive merchant demands to be untied, and before Fayette can decide what to do, the spirits burst through the walls.

She and Vladimir retreat upstairs into Jolera’s room. He is excited about all the spirits he saw, and once again demands that she unlocks the vault. For the last time, she refuses and turns to the door. When she opens it, a wave of blood is crashing against her. She is thrown against the wall and notices an amulet around her neck. Confused, she stands up and makes her way down, back into the fight. She then realizes someone is controlling her with the amulet. Downstairs, she sees Gavin, the Sailors and Saba still fighting against the spirits, Jolera is down on the floor. As she moves through the spirits, there is blood fighting for her, protecting her until she makes it into the Vault room. There, she is made to unscrew her sword arm to reveal the key, and fights back against the control of the mage. With all of her concentration, she manages to stop her arm, but a small tentacle of blood takes the key from her, and she passes out.

When she wakes up, she gets rid of the amulet and comes back into the main room of her inn. Saba stands over the defeated Gavin and reveals he is a mage. Certain that he controls the blood, she plans to kill the defenseless man, but Fayette takes his daggers and kills her instead. The dying Gavin reveals that the sorcerers are still here. Vladimir and his servant Vaquer come down the stairs, armed to the teeth with artifacts from her vault. Vladimir congratulates her for her willpower, offers her a meeting with his benefactors and admires the artifacts the other treasure hunters found for him. Gavin found the amulet that Vladimir used to control her just today, he stole it while the Demacian was accusing Jolera. He mentions

Lady Vengeance, and the dying Jolera says that he’ll meet her soon enough.

She names Vladimir as her betrayer and shouts his name three times while nailing a human doll. She dies with the third nail, and Kalista appears outside. Fayette runs for her ship, but can not get through the hordes of wraiths on the beach. She remembers the bell and desperately runs toward the backside of the inn. Kalista flings a spear through Vaquer at Vladimir, and Fayette sees Vladimir reuse his blood. He seems thrilled to meet, and fight, a spirit like this. Fayette makes her way through a hole in the basement and is stopped by the spirit of her old friend Gavin. With a heavy heart, she strikes him, and he returns to mist. Then she rings the bell.

The bell fills the spirit realm with energy. She hears thousands of souls wail at once, and runs upstairs, where specters come out of the dead sailors. She rushes past them and runs outside where Kalista is still hunting Vladimir. As Fayette arrives at her sloop, the crash of the wave comes and the bell is silent. All spirits on the shore are frozen, and she sets sail, relieved. Looking back, she sees that even though Vladimir is weakened by constantly defending, Kalista is slowed by the bell. She hopes that Lady Vengeance will still kill him; but Vladimir rings the bell again, much louder this time. Spirits from below attack her ship, incited by the chaos of the bell. She defends herself with an oar and is almost thrown overboard, but as the sound of the bell fades a second time, all the spirits drop to the ocean floor. She thinks it is finally over, but Vladimir joins her, riding a wave of blood and steps in her boat. He assures he will not try to kill her, and asks her to bring them to Bilgewater. And he points out that he was right: She did have to open the vault.