League of Legends Wiki
Register
Don't have an account?
Sign In
Advertisement
in: Lore of Piltover, Short Story, Ezreal lore,
and 2 more 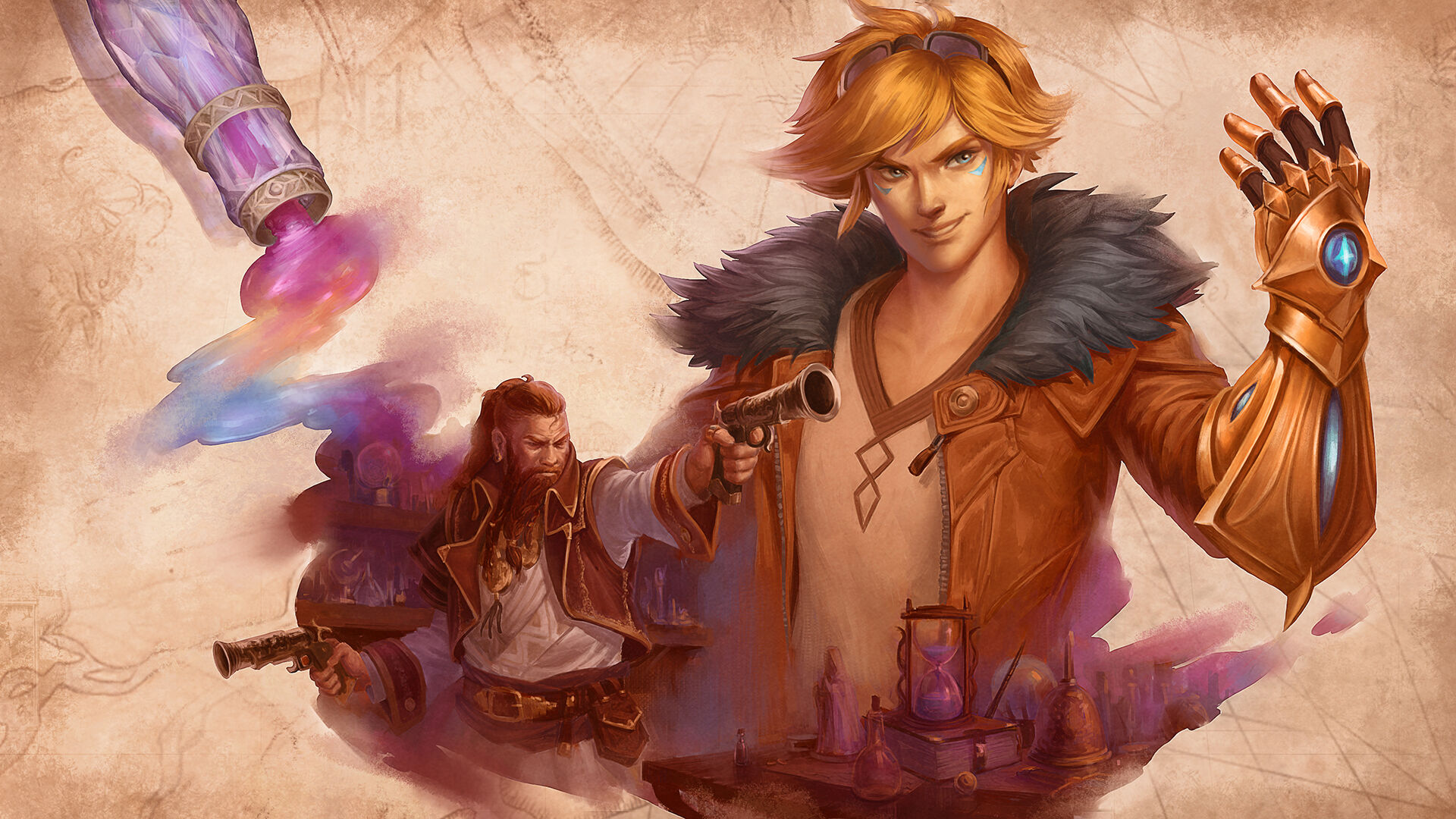 Look, I should be clear—I didn’t want anything to do with “

the dread lord,” or whoever Januk was talking about. I was just trying to sell this stupid little vial to the guy who asked me to get it for him. Should have been easy.

But when you’re me, nothing goes your way for long.

Januk was a red-bearded Freljordian transplant, with deep pockets and big appetites. Unknown to his employers, his private residence was filled with relics and artwork, half of it raided illegally from tombs or other museums, and he loved to dine amidst his collection. As some of the pieces would attest, we’d worked together several times in the past, and he only betrayed me twice. Well, two and a half times, if I’m counting when he blew my cover after we had already salvaged the wreck of the Echelon Dawn…

To Januk’s credit, payment was never a problem, which vastly diminishes my ability to hold a grudge.

“Ezreal,” he said, pushing his plate aside. There were flecks of lamb in his teeth. “Did you find it?”

The it he was referring to was to the Elixir of Uloa. And yes, I had indeed liberated it from a trap-strewn hovel in the jungle near Paretha. I pulled the bone and crystal vial from my satchel. It was cool in the palm of my hand.

“Got what you’re looking for right here,” I said, holding up the vial. “Interesting container. My best guess would be pre-classical Shuriman.”

The spoonful of viscous liquid inside it shimmered in the moonlight. Januk’s eyes widened.

I decided to ramp up the drama. “I tell you what, though—this here isn’t just any ordinary ancient serum. It’s a load bearing ancient serum. The whole place crumbled around me. I barely escaped with my life.”

“The Elixir…” Januk’s voice took on a reverence I had never heard before. “A single drop can quench the soul for a thousand years… Give a man skin as tough as petricite…”

He went to grab it with his greedy hands. I pulled it out of reach.

“And full accreditation in the Guild, remember?”

I’d been denied entry to plenty of things, in my time. Bars, schools, even a

Sona recital… but the Piltover Explorers Guild was the one that stung the most, considering the number of times I’ve risked my neck in the field. Ingrates.

Januk was scowling. “The Guild aren’t particularly fond of you, Ezreal. Can’t say I blame them, having worked with you in the past.” He poured himself some amberwine from a decanter and took a swig. “You left me to rot in that Noxian prison camp…”

“That was payback. For the Echelon Dawn.”

“Which was payback for the map.”

“Which was payback for… something else you did.” I gritted my teeth. “Probably.”

I was getting antsy. I readied myself to make a quick exit.

“Come on, accreditation was half the deal,” I reminded him. “If you don’t want to honor it, I can always find another buyer.”

His boisterous laugh broke the tension. “Why do you think I continue to do business with you? It’s because I like you. We have history, and history is always good for business.” He finished his drink. “Let me fetch the letter from my study. One moment, please.”

Buyers keeping payment in their studies? Oldest trick in the book. He’d probably return aiming a flintlock at my pretty face.

To kill time, I perused his collection of artifacts. There were some I had procured on his behalf. Then my eyes fell on something I had not seen before. Something new—a stone bell, roughly the size of a housecat. Its base was adorned with strange writing. I stepped closer to inspect it.

“It’s Ochnun,” Januk called out. “The language of the dead, composed beyond the mortal veil, and spoken only by those in the afterworld.”

I was getting some serious backstabby vibes, so I spun around.

Januk didn’t have a flintlock. He had two flintlocks.

“I am sorry to inform you, Ezreal, that the Guild has once again denied your application.” He stepped closer, into the light. “The dread lord will rise again. And the Elixir will make it happen.”

A dread lord? Great. I was so close this time…

My gauntlet’s charge rose. Anger is a wonderful arcane motivator. Use it or lose it, I always say.

I raised my arm. Januk fired his pistols. It was magic versus lead shot.

The dull metal slugs burned white-hot in the face of my blast, and winked into silvery vapor on the other side. But with double-crossers, one must be doubly careful, so I quickly charged my gauntlet again. There was a slight fizzle, then a pop, and then I was standing right behind Januk. Teleporting short distances doesn’t really take a lot out of me, so I put my gauntleted hand to the back of his big, stupid head before he could turn around.

“Already one step ahead of you.”

Oh, I did not like the sound of that. I glanced down. Sure enough, the pistols were at his feet.

Did I mention Januk was strong? Because he is super strong. He grabbed my gauntlet in one hand, yanked me over his shoulder with the other, and slammed me bodily through his work desk. The damn stone bell jabbed into my spine. I saw white, and splinters. Lots of little splinters.

Januk kicked me in the ribs for good measure. He twisted the Elixir of Uloa out of my shaky grip, pulled the stopper, and drank deep.

“Your pathetic gauntlet will do nothing to an immortal! The Elixir is—”

“Fake,” I croaked. “Almost the right hues, though.” I held up another, far less remarkable looking vial. “This is the real Elixir. You just drank sand wasp venom, out of a cheap souvenir trinket vessel.”

Januk peered into the empty vial, his face scrunched up like he’d tasted sour milk. In fairness, sour milk would have been a lot better for his digestive system.

I winced as pulled myself back to my feet. He had kicked me unnecessarily hard, but at least he spared my face.

“If I were you, I wouldn’t stray too far from a lavatory for the next few days,’ I added.

He threw the fancy casing to the ground, doubled over, and groaned. Sand wasp venom hits hard and fast. “You… petulant little… I’ll get you… for this…”

I shrugged, then raised my gauntlet and fired another blast of magical energy at the wall. The masonry cracked, melted and exploded outwards. Papers flew everywhere. I picked up the bell, and crouched by Januk’s new window.

I hopped out through the hole, scampered down the masonry and leapt across to a nearby rooftop. I wanted to be far away from Januk as quickly as possible, for lots of reasons. Admittedly, the sand wasp venom was the main one—it was not going to be pretty in that place by morning.

As I ran, I took a closer look at my latest acquisition. Whatever else it was, the Ochnun bell was definitely touched by some darker energy. Once the Explorers Guild got a load of this piece, I’d be a shoo-in for accreditation. With a party in my honor, perhaps? After all, I had just single-handedly kept some dread lord from rising.

And in the end, that’s usually all that matters.