Unique – Death and Taxes: If you deal post-mitigation damage that would leave a champion below 5% of their maximum health,

execute them. Champion kills grant you an additional

Limited to 1 The Collector.

The Collector is a legendary item in 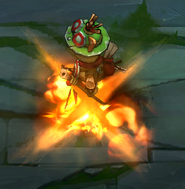