League of Legends Wiki
Register
Don't have an account?
Sign In
in: Lore of Ionia, Lore of Noxus, Short Story,
and 3 more 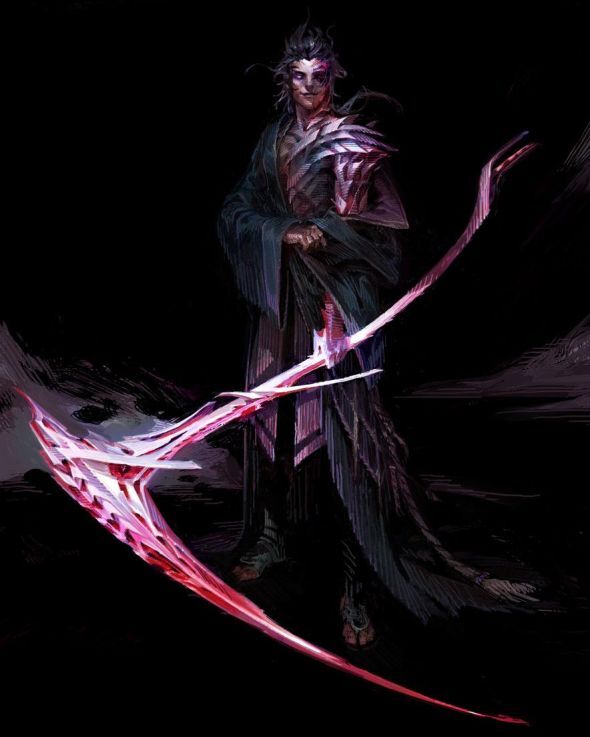 Kayn stood confidently in the shadow of the noxtoraa, surrounded by dead soldiers, and smiled at the irony. These triumphal arches of dark stone were raised to honor the strength of Noxus—to instill fear and to demand fealty from all who passed beneath them. Now this one was a tombstone, a monument to false strength and arrogance, and a symbol of the fallen warriors’ own fear turned against them.

Kayn relished fear. He counted on it. It was a weapon, and as his brothers in the Order of the Shadow had mastered their katana and their shuriken, Kayn had mastered fear.

But as he felt Noxian soil beneath him for the first time in years, amid the enemy soldiers slain and soon to be forgotten, there was unease. It hung in the air like the pressure before a storm, begging to be released.

Nakuri, Kayn’s fellow acolyte of the Order, reversed the grip on his blade and prepared for a more personal fight. To his credit, he almost managed to hide the tremor in his voice. “What’s it going to be, brother?”

Kayn said nothing. His hands rested empty at his sides. He knew he was in control. Even so, he felt a flickering sense of déjà vu, like something out of a dream. It came in a flash, and then was gone.

A voice rose from the empty space between them—a dark and hateful voice that echoed with the pained cries of a thousand battlefields, daring each of them to act.

“Who will prove worthy?”

Zed had summoned his greatest student.

Spies of the Order had confirmed the disheartening rumors. The hated Noxians had discovered an ancient scythe of darkin origin, as powerful as any magic in Ionia. A single eye of crimson hate stared out from the heel of the blade, tempting the strongest of men to wield it in battle. Evidently, none had proved worthy. All who touched it were quickly and painfully consumed by its malevolence, so it had been wrapped in chainmail and sackcloth, and secured by a guarded caravan bound for the Immortal Bastion.

Shieda Kayn knew what would be asked of him. This would be his final test.

He had reached the outskirts of the coastal city of Vindor before he ever considered the journey’s significance. Taking the fight to the enemy in their own land was audacious. But so was Kayn. There was no other who could match his talents, none to whom Zed would entrust the fate of Ionia, and so there could be no doubt: Kayn was destined for greatness.

He set his trap shortly before sunset. The approaching caravan was just visible in the distance, as wisps of dust rising into the orange sky—ample time to dispatch the three guards at the noxtoraa.

He moved in silence across the archway’s lengthening shadow as the first guard paced out a patrol. Kayn summoned his shadow magic and stepped into the black stone wall as if it were a passage open only to him. He could see the guards in silhouette, grasping their pikes tightly with both hands.

He lunged from the edifice cloaked in shadow, and snuffed the life from the second guard with his bare hands. Before the third could even react, Kayn dissolved into tendrils of pure darkness and darted across the cobbled road, reforming in front of his victim. In a flash, he wrenched the man’s head around, snapping his neck with ease.

The first guard heard the bodies fall, lifeless and limp, and turned toward Kayn.

The assassin smiled, taking time to relish the moment. “It paralyzes, does it not?” he hissed, slipping into the shade of the noxtoraa once more. “The fear...”

He rose from the quaking soldier’s own shadow.

“This is the part where you run, Noxian. Tell others what you witnessed here.”

The soldier threw down his pike and sprinted for the safety of Vindor. He didn’t get far.

Clad in robes every bit as dark as Kayn’s, Nakuri leapt from behind the noxtoraa and plunged his katana into the belly of the fleeing soldier. The other acolyte locked eyes with Kayn. “The vaunted strength of Noxus? Such delusion...”

“I knew you were impetuous, brother,” Kayn spat. “But this? Following me all this way, hoping to share in my glory?”

There was no time for further admonishment. They could hear the caravan of soldiers approaching.

“Get out of sight, Nakuri. I will deal with you later. If you survive.”

The long shadows of twilight hid the bodies until the approaching soldiers were almost beneath the grand arch.

Confusion set in among the others as they left their horses and, for the first time, Kayn laid eyes on their cargo. It was just as Zed had described—wrapped in chainmail and sackcloth and strapped to the back of a sturdy Vindoran steed.

Patience was a virtue that Nakuri did not possess, and he heedlessly dove for the nearest soldier. Kayn always selected his targets carefully, and so struck with precision at the lead outrider, felling him with his own sword.

He turned again to the Vindoran, but the scythe was gone.

No. He had come too far to fail.

“Kayn!” Nakuri yelled as he cut down one soldier after another. “Behind you!”

A desperate Noxian had freed the weapon, its red eye now revealed and glowing with inhuman rage. The soldier’s own eyes grew wide as he swung in vicious arcs at his own comrades. He was clearly not in control, trying in vain to release the scythe.

The rumors were true.

Calling again on his shadow magic, Kayn dove into the writhing Noxian’s darkin-corrupted flesh. For the briefest of moments, he saw through the eyes of this ageless being, witnessing millennia of inflicted pain and suffering, screams and lamentations. This thing was death reborn again and again. It was the purest evil, and it had to be stopped.

He burst from what was left of the Noxian—the soldier’s flesh having warped into scales of hardened carapace that shattered into black shards and choking dust. All that remained was the scythe, its eye now closed. Kayn reached for it as Nakuri dispatched the last of their enemies.

“Brother, stop!” the acolyte cried, flicking blood from his katana. “What are you doing? You saw what it can do! It must be destroyed!”

The two of them drew up, neither willing to back down. Beyond the city boundaries, warning bells began to toll. The moment seemed to stretch out.

Nakuri reversed the grip on his blade. “What’s it going to be, brother?”

The scythe spoke to Kayn, then. It seemed as if it was echoing in his mind, and yet the other acolyte’s widening eyes showed he had heard it too.

“Who will prove worthy?”

Kayn conjured fingers of darkness that snatched up the weapon, lifting it into the night and spinning it into his waiting hands. It felt like a part of him, like it had always been a part of him, as if he alone was born to wield it. He spun it with a comfortable flourish and leveled the blade toward Nakuri’s throat.