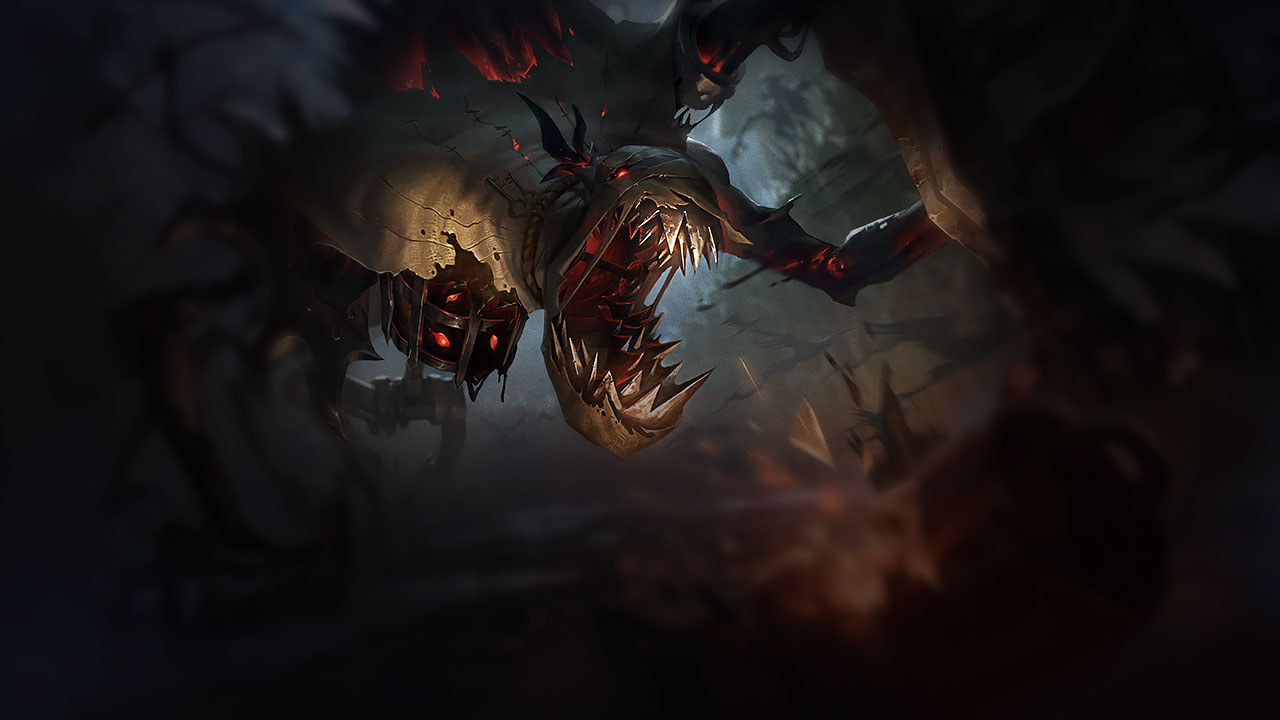 Long, long ago, in a tower by the edge of the sea, a foolish young mage summoned something into the world that he was not prepared to control. What stepped before the boy was something older than recorded history. Something darker than a yawning, starless night. Something the world had desperately tried to forget—and in an instant, the mage, the creature, and the tower itself were lost to all of time.

Freljord, children frighten each other around the fire with tales of a monster that raises itself from untended graves in the ice, its body a shambling mass of helmets, bucklers, furs, and wood. In

Bilgewater, drunken sailors trade accounts of something standing alone on a tiny, distant atoll from which no one has ever returned. An old

Targonian legend speaks of how a

child of twilight stole the only joy from a ragged, whispering horror, while veteran

Noxian soldiers prefer the fable of a lonely farmhand who was blamed for a poor harvest and fed to the crows, later returning to the world as a demon.

Shurima. In every corner of

Runeterra, these myths persist—reshaped, respun, and passed down by countless generations of storytellers. Stories of a thing that looks almost human and stalks places thick with fear.

But these are simply fables to frighten young children. No one would ever be afraid of a silly old monster called

Something has awoken in the Demacian hinterlands, drawn by the climate of rising fear and paranoia. Rural protectorates, separated from the capital by hundreds of miles of farmland, are emptying in mere days. Travelers vanish from the old footpaths. Guard patrols fail to report back from the edges of the kingdom. And wild-eyed survivors claw at their faces from the safety of roadside taverns, wailing of crows that aren't crows, sounds that aren't sounds, and a lopsided horror in the shape of a scarecrow that croaks in the stolen voices of the dead.

Most blame rogue mages. Such accusations are common in these days of rebellion.

Yet the truth is far worse. Something has returned, just as it had in the fictitious tale of the young mage in his seaside tower. An evil gone from the world for numberless centuries—long enough that the warnings of a nascent humanity passed into rumor, then myth, then legend... until all that remained were simple fables. An entity so utterly alien that it defies almost all contemporary knowledge of magic. So impossibly ancient that it has always been. So universally feared that even animals grow nervous when someone speaks its name.

In the wake of this revival, another tale, nearly lost to memory, has seen a resurgence throughout the hinterlands. A legend of a great evil that has no form, no thoughts, and no understanding of the world it inhabits, instead building itself into the crude shape of those that fear it. The terror of all living things, given life in that first terrible scream of creation. A demon before demons were known.

But Fiddlesticks is real.