League of Legends Wiki
Register
Don't have an account?
Sign In
Advertisement
in: Lore of Runeterra, Lore of Demacia, Short Story, Bard lore 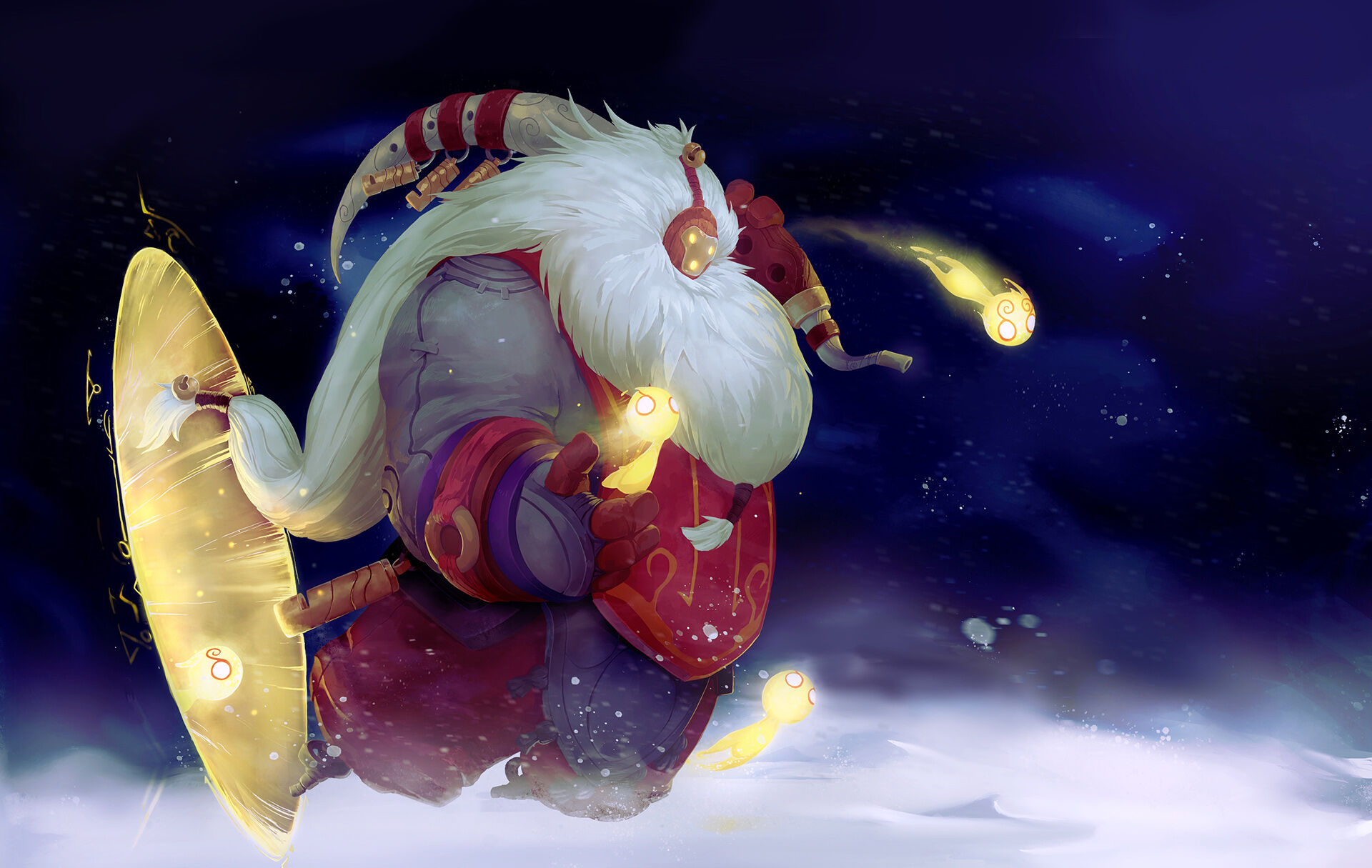 You, there! Yes, you! You look like a fine Demacian with working ears—one who might stay a stretch and heed the warnings of an old man who has seen the impossible.

You, there! Yes, you! You look like a fine Demacian with working ears—one who might stay a stretch and heed the warnings of an old man who has seen the impossible. I’m on a quest, you see, at the bidding of the

Wandering Caretaker, and you can help!

I must retrieve... Well, it’s best that I explain.

Come, now. Don’t shy away. Hear my tale, which is entirely true...

I was first awoken by the clanging of bells—my mother’s two-hundred-year-old wind chimes—screaming outside, beyond my window. She thought she was quite clever, my mother, convincing me their summer song would signal the coming of warm and sunny days. Even at my age, I can only count a handful of pleasant seasons in Valar’s Hollow. Ha! An adolescence marred by the endless chopping of firewood can attest to that. The night I speak of was no exception—a winter storm was raging.

I jumped to my feet when my door burst open and the rush of freezing wind filled my room. After scrambling to sheathe my trembling body in the thickest furs I owned, I made my way to the door, ready to slam it shut. But I hesitated. My mother’s chimes were still screaming in the wind. Though they mostly stirred memories of my harsh and laborious upbringing, they provided me with a sense of connection to her. I should not risk losing them, or worse—suffer no sleep from their incessant wailing.

Don’t get me wrong, the chimes did have a certain appeal. Stories of how they came into my family’s possession told of an incredible destiny and a celebrated past. They were forged from ingot—war metals—some of the rarest in the Freljord. Whenever a battle had been lost and won, the Collectors, my poor but resourceful ancestors, entered the battlefield and retrieved what had been left to rust in the blood-stained snow.

“How much ingot was out there, mother?” I asked once, as she gushed about ancient times.

“Centuries of it,” she replied.

“What did the Collectors do with it all?”

“Sold it to the

Winter's Claw,” she said, shrugging, “who made more weapons for wars to come.” Then she paused for a moment and smiled as her chimes began to sing. “But there was always a little we kept for ourselves—to make instruments of life, not death.”

Indeed, those precious chimes were instruments that brought wonderful music to our land. “Good fortune in bad times,” she told me. I prayed for that fortune when she fell ill, but it never came. The Wandering Caretaker was more concerned with his own wonderful music than helping the infirm, and I was left with her infernal chimes to remember them both by.

Taking a deep breath, I pushed my way outside, but I was halted by an impossible sight: Floating in front of me, unaffected by the storm, was a small, translucent creature. Without wings or arms to hold it in place, it hung there, as if some eldritch magic had nailed it to a block of air. Two glowing white eyes like torches were affixed to its orbish head, and three twinkling stars in its belly began to churn and flicker. To my surprise, one of my mother’s chimes responded, and, like a child’s arm, it reached back to the shimmering creature, adopting its starry glow.

The chime cracked! And I heard its summer song deform. A fissure that was made etched its way up the chime’s side, and specks of gold light were drawn out from within it, as if certain materials that composed it were being stolen away. Those were not lights the thing was stealing; they were my mother’s tears, falling, as this beloved yet irritating heirloom was quickly being destroyed. I could not—I would not let that happen!

So I leapt into the blizzard and took hold of the chime. At its touch, I heard the blast of a horn in the distance. Why, I was not sure. I pulled back with all my might, but the creature’s magic was too strong to overcome. And worse, I felt my entire body jerk skyward, and my feet left the ground. Soon I was hurtling into the heavens, towed into the clouds by the befouled moppet!

CRACK! Another break scribbled its way down the chime. Then I saw something taking shape in the space between us—a shard, a piece of a whole, was materializing. Believing it would be the only thing to save me, I grasped it.

As I reached, I glanced back to the wicked creature, only to realize that it had disappeared. In its place, hovering before me in all his mystic glory, was the Wandering Caretaker. It had taken an entire lifetime of prayer for him to appear, and, as my mother had promised, the chimes brought him forth. The Bard seemed to stare back at me... into me... curious of my being there. But it was too late to explain.

There suddenly came a rush of wind and a wave of heat. I felt my arm stretch the length of a vine. My body followed, spinning and twisting, as I was being taken somewhere—an otherworldly place!

As to where I ended up, my mother’s old dulcimer here will aid me as I sing...

’Twas sound that harkened visions of a place. Divine, Bard’s music just beyond the veil. A firmament revealed to me in space, In string and drum and reed celestial.

Bard opened up the cosmos wide to me! I felt Beginning, End, and In Between. Where waves had never stirred that lampless sea, We heard Sol first prepare the stars to ring.

No human witness had there ever been, But I alone did hear the act take form. That symphony changed me from within, My mortal body suddenly transformed.

A spirit now, a meep celestial, Ascended like the Aspects in this dream, I sang with Bard throughout the sonic realm, And tended to his will a century.

But then I heard a bell begin to bend And felt a darkness silencing the song. I told my brethren and my master then And travel all we did to right the wrong.

And we were brought before a gaping maw, An empty soundless pit devoid of light. My ears beheld such darkness from beyond; It filled my soul with terror and with fright.

I fear the hordes inside sang me a song, One that has no start; it only ends. For when I peered into that deep unknown, I felt my own music crook and bend.

So I forced my ears above to the divine, Turned back to what is good and what is right. But then I caught the rip—the Void’s divide, And soon beheld destruction of the light.

In billions were the fragments, were these chimes, Showered ’cross the land, when darkness split The bell that tolls the rhythm and the time, Runeterra’s hymn, whose song may be forfeit.

To close the door and bring the notes in line The Bard had sent us scouring the world. With every shard, a stitch to recombine What the Void had torn when it emerged.

Soon I awoke in bed, a meep no more, And back in Valar’s Hollow did I dwell, I tore my mother’s chimes from off that door, And offered Bard more shards to fix the bell.

Since, my charge is to collect more chimes Through wind and rain and sun and land and sea. I pray that every treasure will rewind That music that the Void did play to me.

Dear Demacian, I have come a long way and farther still to warn everyone of the darkness that threatens to silence the music of this world. Runeterra is a bell—a world bell—that has been corroded by evil. Its fragments, its chimes, must be found to make it whole again.

And our first step is to place all precious metals in your possession in my basket. I will take them, inspect them, sing to them Bard’s divine music to remove any chimes of the world bell within them. Any chimeless pieces I will, of course, return to you.

No! Wait! Don’t walk away—what I tell you is true! Please, listen. There isn’t much time. The end of our world is nigh...

And only Bard and his meeps can save us.