Tellstones is a strategic memory game that is played across Runeterra. It's origins are unknown but the has started to appear some time after the Ruination and possibly during the Rune Wars, as

Ryze does not remember them existing beforehand.

Runeterra is a boundless world of magic and adventure. Here, powerful champions clash to decide the fate of entire nations, and fight against ancient horrors that threaten the existence of all things… Tellstones is a game played by many of the peoples of Runeterra. Despite the game's popularity across Runeterra, no one seems to know where Tellstones originated. Though it may vary slightly between cultures, nations, or tribes, it is almost always described as a duel of minds—a bluffing game where both players start with the same information. It will challenge not only your memory and focus, but also your ability to outwit and misdirect your opponent. It is considered a duel of minds, where each player tries to commit the movements of the stones to memory while also trying to confuse and outwit their opponents.

Far from being the humorless duty-obsessed bores that outsiders sometimes mistake them for,

Demacians dance, sing, and play often and as enthusiastically as anyone else. One especially popular game, played by families, comrades, and new friends alike, is King's Gambit. This variant of Tellstones is named in honor of the Demacian King, Santon the Great. Many centuries ago, legend tells of King Santon the First. His claim to the throne was challenged by his brother, Amigus, and their dispute threatened to plunge the entire kingdom into civil war. Seeking to avoid any bloodshed or deception, the two of them agreed that whoever won a game of Tellstones would be the true and rightful king, while the other would be his sworn protector and high marshal. Santon risked everything that day, to save the lives of his people. Victorious, his reign was long and just, and Amigus served him loyally until his dying day. However, Amigus died of "natural causes" just a few months after the game.

Dauntless Vanguard often plays Tellstones as means of settling disputes. It is unthinkable that these mighty warriors would ever take up arms against one another, even in the most fierce disagreement or quarrel—instead, if time and circumstances permit, their Sword-Captain might order them to "draw the lines". Each warrior brings their own set of Tellstones to the table, and two separate Pools and Lines are laid out. The sets are not combined, but both played simultaneously. This is a perfect illustration of the martial philosophy of the Dauntless Vanguard: sometimes you need only wait for an ambitious opponent to over-commit, and bring about their own destruction. There are several variations of King's Gambit such as Silent Stones, a more relaxed training version of the game; Drawing The Lines, a variation where two games are played simultaneously and is often played to settle disputes within the Dauntless Vanguard; and the King's Round, a four player variant. 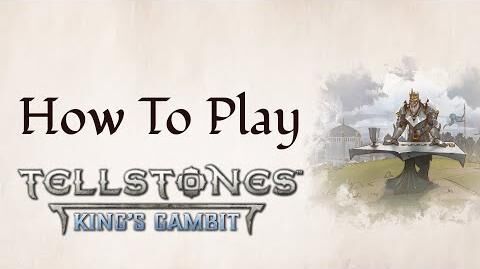