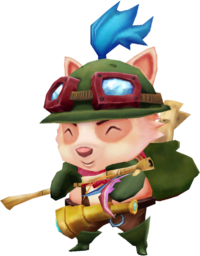 Teemo rides a thin line between chipper compatriot and unrepentant killer, but there's no one else I'd rather have as a friend." -

Teemo is a legend among his yordle brothers and sisters in Bandle City. As far as yordles are concerned, there is something just slightly off about him. While Teemo enjoys the companionship of other yordles, he also insists on frequent solo missions in the ongoing defense of Bandle City. Despite his genuinely warm personality, something switches off inside Teemo's mind during combat so that the lives he must end while on patrol do not burden him. Even as a young recruit, the drill instructors and other trainees found it a little disconcerting that, while Teemo was normally charming and kind, he turned deadly serious and highly efficient the minute combat exercises began. Teemo's superiors quickly steered him toward the Scouts of the Mothership, which is one of Bandle City's most distinguished Special Forces unit alongside the Megling Commandos.

While most yordles do not handle solo scouting missions with a great deal of finesse, Teemo is remarkably efficient at them. His record of success in defending Bandle City from infiltrators easily makes him one of the most dangerous yordles alive, though you'd never know it by having a cup of honey mead with him at his favorite inn. Bandle City chose Teemo as their first champion for the League, and he has taken to it like a duck to water. His signature weapon - a

ajunta poison he personally gathers from the jungles of Kumungu. To help cope with his lengthy periods of isolation, Teemo recently struck up a friendship with

Tristana, a fellow League champion and fellow member of Bandle City's Special Forces. This connection is healthy for both yordles, though now Valoran's voracious media outlets circulate rumors that the friendship is turning into a romantic relationship. While the truth of these rumors are tenuous at best, neither have the two outright denied them. Regardless, Teemo is a crowd favorite in the League of Legends, and a pint-sized foe that many have come to fear.

"Though he is known as the Swift Scout, it is clear that

Teemo is actually something else - the unrepentant assassin of Bandle City."

As far as yordles are concerned, there is something slightly wrong with Teemo. While he enjoys - and in fact needs - the level of community and companionship inherent to all yordles, Teemo feels it so strongly that he ventures out on his own to destroy the enemies of Bandle City. There is something that switches off in Teemo, so that the lives he ends do not burden him.

It seemed only logical to send him to fight in the League of Legends as the champion of Bandle City. He has taken to the League like a duck to water, seeking out the foes of the yordles and extinguishing them with the rare

ajunta poison he personally gathers from the jungles of Kumungu. However, the limited company of his own kind wears on Teemo, and cracks are beginning to show in his innocent and chipper facade.

Captain of the Bandle City Scouts,

Teemo is the foremost defender of the yordle homeland. In addition to his duties as scout leader, which include planning the soap-box derby, teaching new recruits the scout's pledge, and judging the yearly s'more-eating contest, Teemo is also responsible for the defense of Bandle City itself. He and his trustworthy band of scouts patrol the borderlands, their backpacks filled with enough survival gear to sustain each of them for more than a month (even though Bantam City is no more than a mile from any single point inside Yordleland).

In Teemo's bestselling autobiography, Accuracy by Volume, the leader of the Bandle City Scouts expounds on yordle military tactics, such as blow-dart carpet bombing, and filling trebuchets with poison-tipped sewing needles.

Though he can often be found in the courtyard outside the practice arenas signing copies of his book, Teemo is really at the League of Legends for another reason. He has come, as the emissary for the entire yordle nation, to petition the Institute of War to start a new type of tournament. His proposition includes wood carving, rope bridge building, and campfire cooking to the list of approved forms of 'combat' sanctioned inside the League. So far, he hasn't had much luck.

Retrieved from "https://leagueoflegends.fandom.com/wiki/Teemo/Background/History?oldid=3084784"
Community content is available under CC-BY-SA unless otherwise noted.