Targon are hoofed mammals found on slobes of

Their most notable feature are the pair of purple horn-like gems pertruding from and above their heads. The goats of Mount Targon are even more dangerous than their ordinary cousins, for the gems that make up their horns embed painful shards upon impact. When young the goats have a single pair of small horns, but over time those horns would shatter and small chunks would float above the existing attached horns. Elder goats have large and complex horn designs. During celestial equinoxes, the horns of the goats glow in stellar pink and blue colors.

It is unclear if there is some kind of sexual dimorphism, or the different goat appearances are only just the relevant to their age.

Mountain herders of Targon take great pride in protecting these creatures, especially from other predators, avalanches, or falling trees. 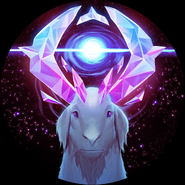