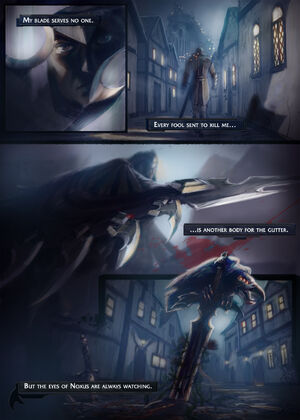 It takes a truly resourceful gentleman to seamlessly combine function and style, particularly on the battlefield. It should come as no surprise, then, that the upcoming champion of the League is a man of both utility and flair.

Allow me to introduce

Talon, The Blade's Shadow. In addition to looking every bit the part of the cloaked and cowled assassin that he is, Talon's cloak of blades makes him a dangerous and terrifying presence on the battlefield. It's probably best to steer clear of this cloaked and dangerous champion on the Field of Justice, or he won't be the only one pulling a disappearing act.

Talon, the Blade's Shadow, is a physical damage assassin who specializes in high-mobility, high-risk, high-reward gameplay. Our goal with Talon was to create a powerful but fragile melee character with specialized tools to make him both deadly and evasive. As a result, what Talon lacks in durability and sustain, he dishes out in mobility and power.

The driving force behind Talon's gameplay is the way that he engages and disengages from combat using his four abilities:

Talon's auto-attacks deal additional damage to a target that is under the influence of any crowd control effect.

Talon viciously stabs his enemy, dealing heavy physical damage and causing them to leave a blood trail that Talon can use to track them.

Talon fans out three blades in front of him that quickly return to him, dealing damage and

slowing any target hit in either direction.

An ability that allows Talon to catch his enemies by surprise. Talon leaps behind his target and

silences them for a short duration, amplifying the damage of any of his follow up attacks and abilities.

Talon enters stealth for a short duration, gaining a movement speed boost and sending blades that deal damage to all enemies in their path flying in every direction. Once the blades reach a certain distance, they pause and form a circle. When Talon reappears from stealth, the blades return to him, once again dealing damage to any opponent they pass through.

Playing Talon effectively is all about reading the situation and reacting strategically to your target.

Shadow Assault can be either your saving grace or your deadliest advance. Using it to disappear can sting your target and leave them chasing ghosts. But if it's a fight you want, using it to initiate in conjunction with

To sum up, Talon's a mean, shadowy, vicious assassin... and we're excited to see him join the League soon. And as a side note, his mobility and elusiveness makes him a very good pick on Dominion!

Assassin's Path, there's no wall too steep to keep Talon from his targets.[4]

Talon's abilities wound champions and epic monsters for a short duration, stacking up to three times. When Talon basic attacks a fully wounded target, they bleed for a large amount of physical damage over time.

Leaps to a target, dealing physical damage. If cast from melee range, Talon instead

Targeting terrain allows Talon to do a super-cool vault over it. Talon can't vault over the same terrain for a long period of time.

Fires a ring of blades from Talon's location, increasing movement speed and making him

invisible for a few seconds. When Talon emerges from stealth, the blades converge on his location, dealing physical damage each time they pass through an enemy. If Talon breaks his stealth by basic attacking or using

Noxian Diplomacy, the blades will converge on his target's location instead.

Retrieved from "https://leagueoflegends.fandom.com/wiki/Talon/Development?oldid=3058657"
Community content is available under CC-BY-SA unless otherwise noted.