Tabu, the Voodoo Shaman is a canceled champion.

As one of the few remaining voodoo shamans of Jugos, Tabu took it upon himself to educate the populace of his culture's twisted and remarkable powers. Traveling from town to town with local gypsies, Tabu acquired quite a large collection of shrunken heads, shriveled ears, and wispy vials which held living souls. Tabu didn't have as much luck selling these wares as he expected.

Confirmation of his cancelation came in the 2010 Harrowing map skin for Summoner's Rift, where a coffin containing Tabu (along with two others each containing

Gavid) could be seen, effectively serving as the final 'nail in the coffin'.

The presented information is extracted from Closed Beta 1 (25-Mar-2009)[1], where he is referred as "48th Slave". There are minor wording adjustments for this presentation.

Active: Links Tabu to an enemy or allied champion for 20 seconds.

The icon is named "Wave of Loathing".

healing all allied units within.

pacifies the target enemy unit for a few seconds.

tethers himself to the target and attempts to steal its soul, dealing damage to it while regenerating for the same amount each second. 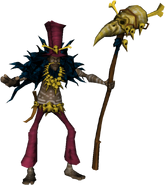