The Summoner's Rift is the most commonly used Field of Justice.

Summoner's Rift is located in a remote forest between Freljord, and the Ironspike Mountains. The Summoner's Rift is one of a few locations in Valoran where magical energy is at its greatest concentration, making it a highly sought-after locale to pursue magical endeavors.

The structure is made of Noxian Granite.

The Rune War began with the failure of a legal body founded to curtail political power—when this institute faltered, the fate of all was sealed. Historically, the forest where the Rift resides was the site of several battles between two summoner factions symbolized with the Stag and Owl crests.

The Stag, or the Protectorate, was an order dedicated to enforcing a rigid, unforgiving system of laws, in an attempt to slow the seemingly inevitable rise of the Magelords.

The Owl, or the Magelord, was a culture which once conquered more than half the world at the dawn of civilization. It was strictly segregated into brutal warrior-castes, whose rise and fall was dictated by their victories in battle. Though the great armies of the Magelord Empire have vanished into antiquity, their modern descendants uphold the vicious brutality of their ancestors.

Dragon who currently resides in one of the battle torn ruins.

Krugs are creatures made from local flora and earth infused to construct a magical being. The Rifts unstable magic has inadvertently caused the reemergence of

Other known creature that live in this area are species of forest chameleons, ducks, Antlermice, Porowls, dragonflies and butterflies.

Antlermice are a quadruped mammalian species native to Summoner's Rift. They have large ears for hearing and a long skinny tail for movability against larger predators. Their fur varies from light to medium dark drown, and their eyes are of a light green color. Their antlers are used for attracting mates, contesting with other males and generally for mating seasons and self-defense.

Bantha are large quadruped mammalian species used by Yordle merchants for transport. They have long brown fur across their whole body, large front tusks, hooves, and horns to fend off carnivorous predators. They are mainly herbivores. Despite its enormous and intimidating look, Banthas are gentle giants. One such creature was spotted on the Summoner's Rift.

Blast Cones are a type of plant native to Summoner's Rift with explosive fruit. Their explosive properties are powerful enough to fling a humanoid several meters away.

Bramblebacks are magical fusion of flora and fauna native to Summoner's Rift. Despite its plant like appearance, having tree bark for its skin and leaves as fur, its behavior is very much of an animal reminiscent of a bear or wolf. The creature is powered by fire magic. Smaller forms of this creature are called

Forest chameleons are a quadruped lizard species native to Runeterra but are a common sight on Summoner's Rift. Their scales of an orange color and their eyes are light green. They can usually be seen on forest trees and rocks, where they blend very well away from dangers.

Krugs are magical fusion of flora, fauna, and rock native to Summoner's Rift. Despite its rock like appearance, its behavior is very much of an animal reminiscent of a bear, wolf, or a bettle. The creature is powered by nature magic. Larger forms of this creature are called

Murk Wolves are mammalian creatures that are magically altered by runic magical energy scattered across the Summoner's Rift. They usually live near caves and dense forest growths. The color of their fur varies upon how much a murk wolf was altered by magical energy in the womb, ether a light brown color or a murky gray color. They have also been instances of mutations in this species, where some murk wolves are born with

two heads. It is said that killing a Greater Murk Wolf with the spell of Smite summons forth a forest spirit to act as watcher for the victor.

Porowls are an avian species native to Summoner's Rift. Their feathers are a gray-brownish color and have small dark brown horns. Their appearance inspired many of the Magelords architecture. They can usually be seen atop of trees, curiously watching the goings-on around them.

Raptors are an avian species native to Summoner's Rift. While incapable of flight, they have large strong back legs and large front teeth used for hunting. This species tents to its young until they can fend for themselves against larger predators. When born their feathers are the predominantly blue-greenish color, once they mature their obtain the

Crimson Raptor look. Their feathers are used for making

Scryer's Blooms are a type of plant with magical properties, being used for

Sentinels, or stone-golems, are magical fusion of flora, fauna, and rock native to Summoner's Rift. Despite its rock like appearance, its behavior is very much of an animal reminiscent of a bear or wolf. The creature is powered by nature magic. Smaller forms of this creature are called

Baron Nashor is a voidborn creature residing on Summoner's Rift. This one of a kind creature has a shape and behavior of a river serpent. What differentiates it from a regular serpent is its numerous arachnid appendages, as well as two additional mouths protruding from its head area. The creature has 12 eyes (some of them injured due to past battles), a mouth with sharp theeth that can gape open wide for larger prey, and horned like crests on the top of the head. The colours of the creatures exoskeleton go from dark purple to light teal. This creature was believed to be deceased for numereous centuries, but due to rescent Void rifts opening on Summoner's Rift it has reemerged again.

Frogs are amphibious creatures that inhabit specific magical locations, such as Summoner's Rift. Although frogs are a common sight, an amalgamation of a frog specimen and a magical anomaly borne the monsters known as

Gromp. These monsters are hardy and tough and its hide can deflect the sharpest of blades and the strongest of spells. It is said that killing a Gromp with the spell of Smite grants unto the victor the creature's poisonous presence, giving even the fiercest predator pause.

Honeyfruits are a type of edible plant native to Summoner's Rift and can be seen harvested near the city of Palcyff. Its healing properties are also used for medicinal purposes such as

Health potions. Being a semi-aquatic plant, it can be seen on the shores of rivers, lakes, and other bodies of fresh water .

The objective of Summoner's Rift is simple – destroy the enemy nexus. In order to do this, champions must traverse down one of three different paths (or lanes) in order to attack their enemy at their weakest points they can exploit. Both teams have their lanes defended by numerous turrets; each turret grows in strength the closer it gets to its respective nexus and each turret must be eliminated in order to gain access to the next turret in that lane. Cooperating with fellow summoners is an absolute requirement for success, as it is easy for a champion to find themselves ambushed by enemies in the lanes of the Rift.

The newest and most venerated battleground is known as Summoner's Rift. Traverse down on of three different paths in order to attack your enemy at their weakest point. Work with your allies to siege the enemy base and destroy their Nexus!

Summoner's Rift during its history had a total of four shopkeepers.

The Blood Moon Version of Summoner's Rift was a special variant designed for the 2017 Blood Moon Event.

The Arcade Version of Summoner's Rift was a special variant designed for the August 2017 release of three Battle Boss skins.

Summoner's Rift map has been used for certain special, limited-time, featured game modes that circulate in and out.

May 23, 2012 brought graphical and technical updates to Summoner's Rift. The updates brought players better aesthetics as well as improved overall graphical performance for players on lower settings. Some of the enhancements included: 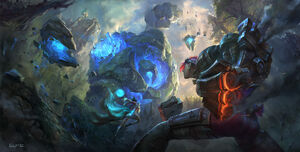 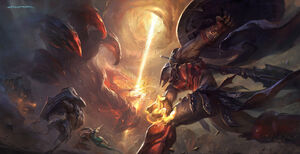 On November 12, 2014 a new update to Summoner's Rift went live for use on the Team Builder queue and all bot modes. Then in November 19 the updated Summoner's Rift was released for all queues, replacing the old one entirely. This time the update has been more heavier than the previous one, and the map was remade from scratch, changing the overall art style. From the minions, to the monsters, the structures, the decorations, the vegetation and even the music it was all completely remade. The new Summoner's Rift is in all respects a new map, made preserving the spirit and gameplay of the older Summoner's Rift. The new elements are:

Summoner's Rift has come a long way since League's launch in 2009, but our latest update to ol' trusty was the biggest change in the map's history.

While all updates go through iterations and testing, Summoner's Rift required a huge team of artists to concept and sketch out art for months before we started working in 3D. To celebrate the end of SR's beta run, we're releasing a few of the concept art pieces the environment team created, complete with notes and insights from the artists themselves.

Other Locations
Retrieved from "https://leagueoflegends.fandom.com/wiki/Summoner%27s_Rift?oldid=3116776"
Community content is available under CC-BY-SA unless otherwise noted.