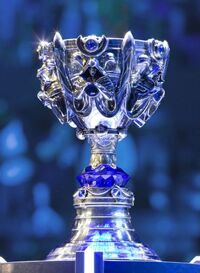 The Summoner's Cup is the trophy that the winners of the World Championship are awarded.

It was introduced in 2012 for the Season Two Championship. It is one of the biggest trophies in world sports, because no-one at Riot specifically considered how much a trophy should weigh.[1] It weighs about 70 pounds (~ 32 kg)

The cup had a video showing some of the creation process[2] and also the official reveal during the Season 2 World Championship.[3] It was created by trophy creators Thomas Lyte[4] in London. They created world-famous sporting trophies like the FA cup (Soccer/Football), Ryder cup (Golf) etc.