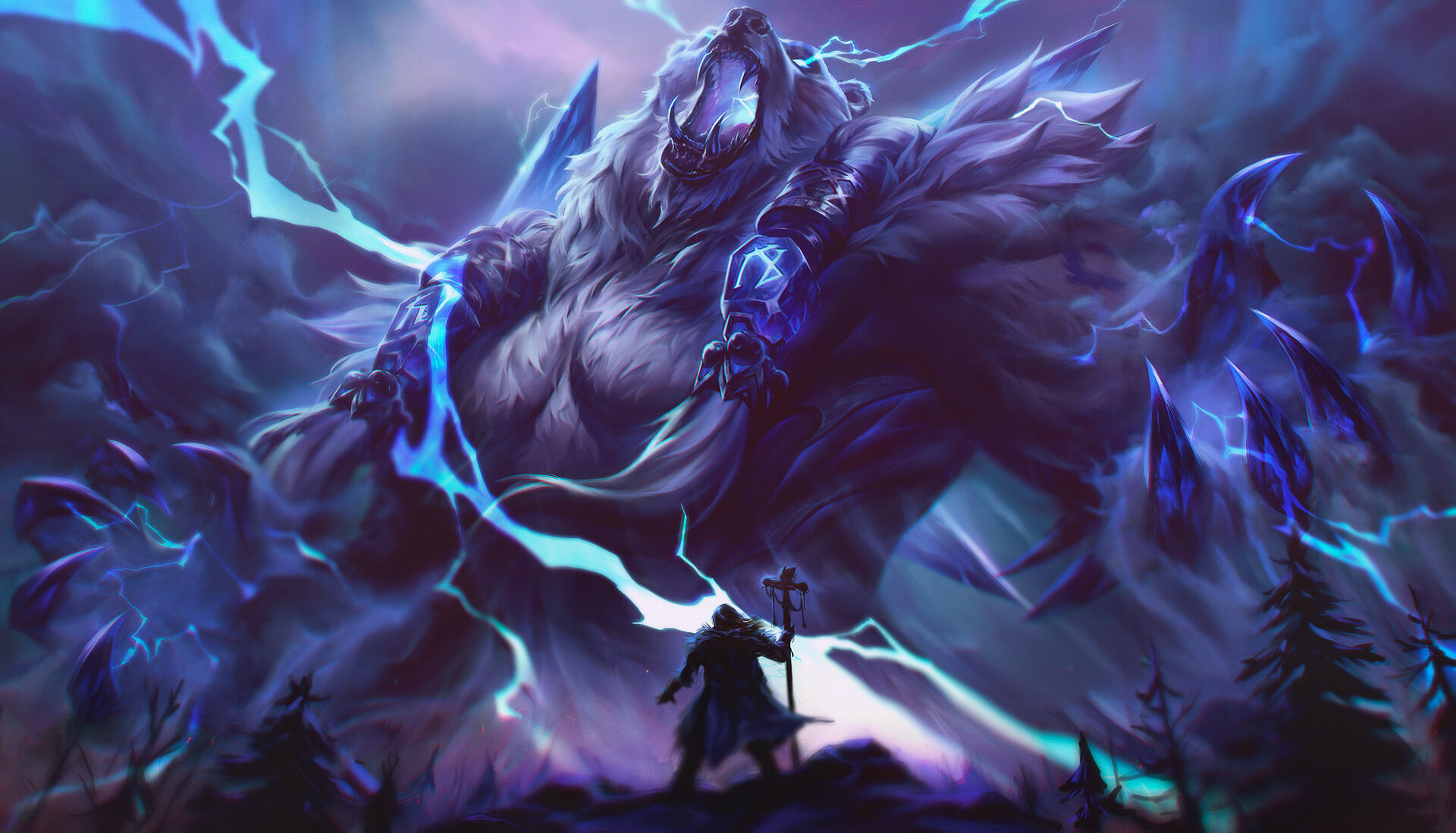 The god-bear twitched in his sleep, but his eyes didn't open.

It was an old name, and had not been spoken aloud for... how long? What he heard must have been a dream, or an echo of the past. With a snort, he burrowed his head deeper into the thick snow and continued his slumber of ages.

“Valhir, with your name, and with this blood, I call upon you!”

The voice was half a land away, but sounded as clear as if spoken directly into his ear.

With a low growl, the great bear rose, pushing himself to his feet. An avalanche of snow fell from his titanic form, making the earth rumble. He shook out his fur and turned his heavy head from horizon to horizon, nostrils flaring.

He could taste the blood tribute on the air, and a thrill ran through him. Somewhere, stones had been arranged to form his rune. A sacrifice had been made in his name. He felt the power of worship infusing his limbs.

“Valhir! We call on your fury! Give us your strength! Every death is an offering!”

With the promise of battle, slaughter, and worship, Valhir's heart pounded in time to the war drums he could feel echoing across the land. He could hear the stamping of feet, the clash of blades, the cries of the dying.

The Volibear reared onto his hind legs and roared to the heavens. The sound reverberated across the icy tundra, touching the soul of every living creature in the

Hundreds of miles away, where the sun never rose, a spirit walker woke screaming, clawing at his face with hands twisted into immense talons.

Across the ice floes in a different direction, packs of rimefang wolves threw back their heads and howled, echoing the demi-god's cry.

dropped to all fours and surged forward, massive claws ripping up the frozen earth. Snow-covered boulders and trees were smashed out of his path, and the wind whistled through his thick fur as he picked up speed.

When next he paused, sniffing the air, he was hundreds of miles away. He was getting close. The storm clouds of his war-rage darkened the sky overhead.

“Valhir! We kill and die in your name!”

With an earth-shattering impact, the god-bear arrived.

High upon an icy rise, lightning flickering across his ivory fur, he gazed across the battlefield.

Two armies were engaged upon the blood-soaked plain below. The dead and dying were strewn across the snow. One of the forces was vastly outnumbered. They were fighting a losing battle.

The giant bear snorted. Something smelled wrong about the larger of the armies. Its humans were clad in black iron, and fought beneath a red banner. He growled as he realized they were not of the Freljord, but weaklings from a land where the snow no longer held sway. He bared his teeth, and lightning flashed. It struck in the midst of the battle with a deafening crash, sending charred corpses from both sides flying.

The Volibear focused his fury-reddened gaze on the one who shouted his name. A mortal woman, clad in fur, stared up at him, her face splattered with gore. She raised a pair of bloodied axes to the sky in salute, a savage grin on her face.

Many of the other combatants had ceased fighting, staring at the demi-god in awe and horror, but the Volibear's attention was fixed on the woman.

This was the one whose heart had called the storm.

“Valhir!” she screamed, thrusting her bloodied axes into the air once more. “With these deaths, we honor you!”

With a last deferent salute, the woman turned back to the fight, hurling herself into her enemy with renewed vigor.

The Volibear turned his gaze upon those the woman fought—the outsiders. The enemy. With a snarl, he charged.

“Vol kau fera!” he roared, making the heavens themselves shake.

It was over in moments.

In the face of the unstoppable fury of the god-bear, the resolve of the enemy crumbled. The first of them turned to run. It quickly turned into a rout, then to butchery, as the Freljordians—now filled with the savage rage of the Volibear—fell upon the fleeing enemy like wolves, howling as they pursued them across the snow.

The Volibear watched the slaughter in satisfaction, blood dripping from his maw.

The woman that had called him dropped to her knees in reverence and bowed her head.

“Oh, great Valhir!” she cried. “I am Warmother Raetha, the Bloodied Hand. By your intervention, our village is saved!”

It was only then, as the Volibear's battle-lust began to abate, that he saw the nearby farmsteads and stone houses, and his eyes narrowed. He turned his gaze back upon the kneeling woman.

He loomed over her, easily four times her height, but growing ever larger as his anger returned. His almighty form was crisscrossed with old scars and new battle wounds—all marks he bore proudly. His massive claws dripped with gore. The urge to rip and rend remained strong.

She looked up at him in confusion. It was clear the old tongue had been all but forgotten.

“Stand,” he rumbled in the younger, bastardized language she spoke. “A warrior kneels to no one.”

His gaze settled on something further along the valley. A dangerous growl rose from deep within him, heavy with the promise of violence. The woman, Raetha, took a step back, suddenly wary.

“What. Is. This?” he bellowed, the air tingling with electricity as his anger grew.

The woman glanced over her shoulder, confused and uneasy.

The Volibear's lips curled back, exposing bloodied fangs. This was his river, and it had flowed free and wild since before the coming of humanity. That mortals dared block it, to hold back its power, was an abomination.

He stomped past the woman, his anger building with every step. By the time he reached the crude structure, his rage was a barely contained maelstrom, and the air around him crackled with power. Warmother Raetha and a collection of others shadowed him at a wary distance.

The god-bear splashed into the shallows below the dam. The water barely reached past his paws, and his anger redoubled. The river should be thundering.

With a roar, he tore down the stones and freed the waters.

Now it thundered, bursting forth in a great churning wave. The power of the river crashed around him.

There was screaming as it surged down across the floodplain. The god-bear watched in satisfaction as the first of the Freljordian's houses was smashed aside, timbers shattering and stonework collapsing. People ran, clutching younglings, as the waters demolished the entire settlement.

Once all evidence of civilization was gone, the Volibear turned to the Freljordians. They stood aghast, shocked at what he had wrought.

He could taste fear in the air, but he also felt the awe and reverence of the onlooking mortals.

“Live!” he commanded. “Live wild! Hunt! Kill! Honor the old ways… and the old ways will honor you!”

Warmother Raetha was now standing tall and slowly nodding. This one had the spirit of a true warrior. And in his immortal heart, he knew most of the others would follow her.

The Volibear gave her a nod, and turned to the horizon.