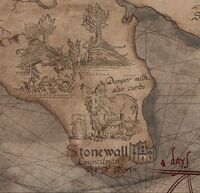 Dunpors are a goat-like species native to the areas of Stonewall. Its milk is heavily sought after by Piltover traders.

Piltover trading families have close trading ties with the city-state nation of Stonewall, such as Clan Medarda with Councilman Aj Ni Noorin. One of the nations more well known exports to Piltover are Dunpor milk and curds.