Unique – Bloodlust: After dealing damage to or taking damage from an enemy champion,

1.2%) of maximum health over 6 seconds. This stacks and refreshes per unique champion, up to 5 times, but every stack beyond the first is reduced by 50%, for a maximum of healing for (

3.6%) of maximum health over the duration.
Unique – Lifeline: If you would take damage that would reduce you below 30% of your maximum health, you first gain a

shield that absorbs 100 damage for 4 seconds, increased by (

4.8%) maximum health per stack of Bloodlust, up to an increase of (

Sterak's Gage is a legendary item in 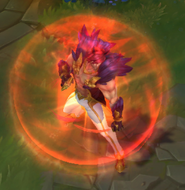