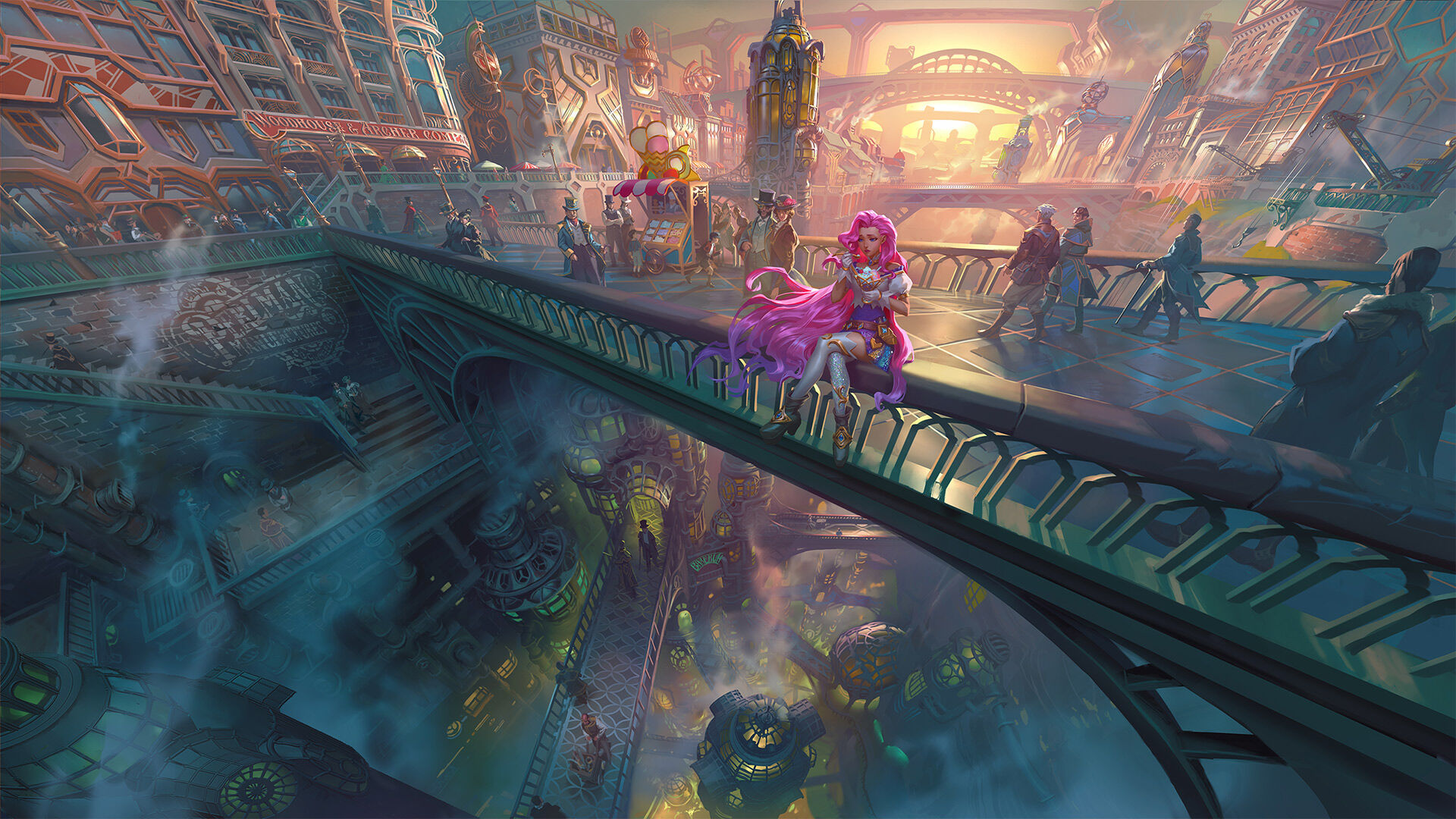 Zaun and Piltover sing to one another.

Piltover sing to one another. The refrains are full of old wounds, and injustice, and pain. I think it's just me that can hear it, but we all feel it, a hum at the back of everyday life, pushing both Zaunites and Piltovans into strident discord.

I know they can sing together. I've heard it. Scraps of it—once in a while—little chords that make my heart ache with possibility. And once, a beautiful, crushing tidal wave of harmony and hope. It was the same moment I heard my hextech crystal for the first time.

The voice sang a thousand hymns at once. Each of them was a pebble in an avalanche, impossible to understand beyond scattered notes. The voice could hear me—and I wanted so badly to keep listening—but it fell back to a fuzzy hum the instant Zaun and Piltover ended their symphony.

Here in the Entresol, where I hide in the dark behind the stage, that duet should ring clear. The top of Zaun; the bottom of Piltover. The Gray lingers, smearing grime across hammered Piltovan bronze. Zaunite chem-lamps scatter the colors of Piltovan stained glass across Zaunite cobbled streets carefully engineered with Piltovan tools.

And folk from both cities make their way here, bringing that rapturous soul-song only I can hear. Zaunites pour in from below, a thousand different instruments strummed with tuneless enthusiasm. Kids taunt and jeer, while older folks usher them along, searching for a moment’s peace. Piltovans march down in trumpeting waves, inquisitive and bright and proud. They come by descender, or by the stairways and ramps connecting to the overhead Promenade, the Entresol’s posh Piltovan twin. They laugh and joke together, gesturing appreciatively at the quaintness of our makeshift open-air theatre.

It’s exciting, at first. I’m so happy they’re all here. I close my eyes and tune to my crystal, pleading for it to speak again.

But the crystal emits that same warbling, distant hum, a presence there and not there. Even that fades to a murmur as the songs clash, turning duet into duel. Piltovan laughter lapses into sneering discomfort. Zaunite shouts quiet into indignant scowls. And, almost as if they’d planned it, the crowd organizes into two perfect, separate halves.

This is what it means to live in Zaun and in Piltover. The Entresol’s a place to come together, sure, but not to connect. Only because the cities have to touch, somewhere. I watch as one Piltovan trips, nearly crossing that perfect gap between them, only for two of his fellows to catch him and bring him protectively back into the fold.

Ugh! They’re all here for the same reason! Why can’t they put their guards down for, like, one moment and just be with each other?

Why do I always think it’ll change? I’m just one person. Just Seraphine. Who could barely even leave her house for how many years? How am I supposed to make them see that it could be different? Why do I think I can?

Why did I ever think I could?

The lights come on, and the shock makes me realize I’ve been holding my breath. I feel the chill on my forearms, the mic in my shivering grip. I look at the crowd. There are a few appreciative whoops, but mostly they’re focused on keeping separate from the other side. I take a breath.

A pure, familiar note of soul-music rings out to me from the Piltovan audience. I look over and see Schala’s tired smile, beaming up at me from a crowd that melts for a moment into the background as I’m swept up in her song. During visits to my parents’ shop, Schala would tell me about her thesis, reading dramatically from it like an eager parent would a storybook. She’d tell me what had changed since the last time it had been rejected by the college. “Seventh time’s the charm” was what she said the last time we talked. But even back then, I could hear the doubt edging into her optimism. Six rejections, and she was still facing forward. But it was through a cloud of doubt: Should she maybe be doing something else with her life?

Her self-doubt nestles into mine, and the next breath comes a little easier.

Another song joins the melody, this time from the Zaunite crowd. I look over and see Roland, an absolute artist of a silversmith. I’d first been drawn to his little workshop by the sound of music. He’d piled crates and supplies all on one side of the shop to make room for a handful of kids who were using the corner for what looked like band practice. He said that the ruckus made it easier to focus, that he needed the sound more than the space. That he might need to get used to such a small room if his next design didn’t sell.

Roland’s song twists with Schala’s in my head, one drums and brass and gravel, one wind and horns and hushed vocals. They couldn’t sound more different, but something just makes it work somehow. One song full of self-doubt, the other, fear for the future.

But there’s something else. A sturdy, rolling, endless beat that keeps their songs from spinning out into singular, dying notes. It’s the same beat in both songs. Schala loves her work, and Roland his.

Their determination finds mine, snatches it from a fall into darkness.

The next breath is sweet.

I don’t need to solve everything. I’m not here for that. Neither are they, and that’s okay. I listen for the crystal, and its steady rhythm builds and rumbles, indistinct but there. I want to reach out, and I only know one way how.

I close my eyes and let myself be filled with Schala’s song and with Roland’s. I imagine their struggles. Schala, chewing on a pen until her eyes widen in epiphany and she writes the perfect conclusion to her thesis. Roland, one eye closed tight as he gently, gently, shapes the last detailing into an ornate silver frame, then stands back with a grin and a sigh when he knows it’s perfect. Tiny explosions crawl across my shoulders, up my spine, into my head, and music lights my whole body on fire.

Maybe our voices are quiet alone. Maybe mine’s quiet alone. But I’m not. We’re not. I don’t hold anything back, because I know they don’t either. The panic, the fear, the self-doubt. I pour it all into the song, heaps of it, so much that I want to cry. Our songs are droplets of rainwater on a windowpane. Schala’s swirls itself into mine, and we become a little stream. We find Roland, happy to be caught up in our motion. Together, we find the crowd, each droplet gathering another and another and another until we’re a flood of song and feeling.

That flood grows louder and louder as the crowd, silent but for the swell of their souls, opens to the music. Once, I would have gotten lost in this storm of sound. But I have Roland, and Schala, and myself, and we feel what they feel. They know what drives us, what drives me. I’m so grateful. I’ll make sure they know that, too. I push that feeling into a single note, and in that moment, I know the music we’re making could pierce the heavens.

The song ends, and my eyes open to the crowd. A single entity greets me, raucous and cheering and surging together toward the stage. Not a cobble in sight. My muses have found one another in the center of the crowd, and I can’t tell anymore which side is which.

The Entresol’s a beautiful place. I’ve got the best seat in the house, a hidden little corner table where a lucky patron can sit in secret silence, sip a hot cup of tea, and watch the world pass by.

My show ended a few bells ago, but the crowd stuck around, talking and laughing together. Local businessfolk took quick advantage, opening up shop and ferrying out tables and chairs. My stage, powered down and pushed off to the side, has become a makeshift playground, where Piltovan and Zaunite kids are challenging one another to various antics. I can feel the charge in the air, excitement and wonder and that airy feeling you get on days you never want to end.

I sit back, put both hands around my steaming mug, close my eyes, and smile. They all make such wondrous music. Piltover and Zaun continue their duet, if only for a little while.

A familiar voice rumbles through me, faint but urgent. My soul soars even as my heart starts to pound. I don’t know what I’ll hear, whether we’ll understand each other this time, how long we have. I only know that it needs to be heard.

Its song lifts in an orchestral swell, and I brace for the avalanche. It has so much to sing, and just me to hear it.

But I won't ever stop trying to listen.
▲ TOP ▲