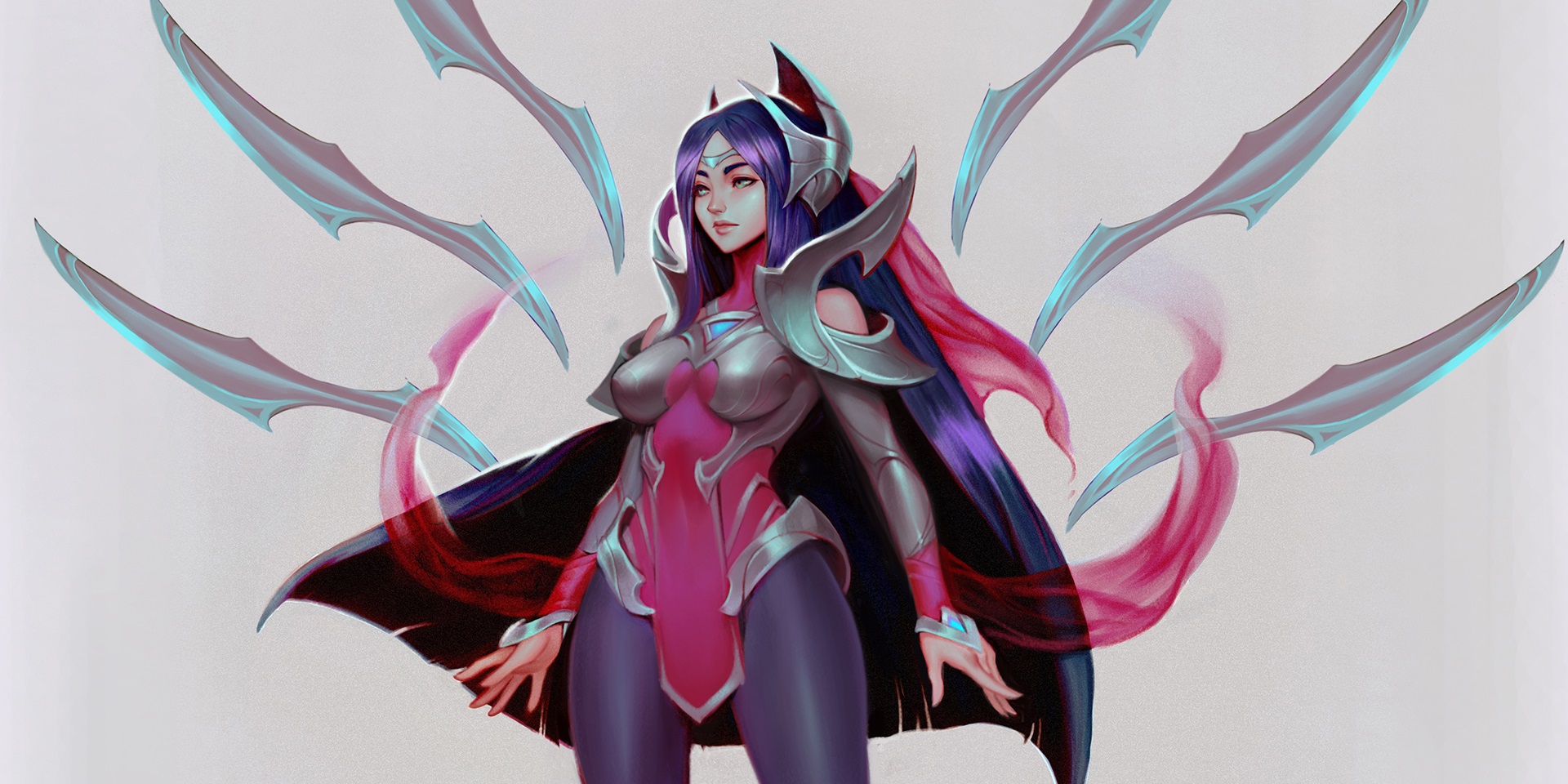 “I believed in you, Blade Dancer!” the man choked, his lips frothing red. “You showed us the path…”

Irelia held her stance. She looked down at him, this devotee of the Brotherhood, on his knees in the mud. He had been pierced over and over by her blades.

“We could have been strong... United as one people...”

“That is not the Spirit’s way,” she replied. “If that’s what you think, then you are wrong.”

He had come to this village, waiting for the perfect moment before making his move. But he was clumsy and awkward. She had danced around him easily.

He had been determined to kill her. The worst thing was, he wasn’t the first. Irelia’s blades now hovered at her shoulders, following the graceful, circling movements of her hands. One simple gesture, and it could all be over. He spat blood on the ground, his eyes burning with hatred. “If you will not lead Navori, the Brotherhood will.”

He tried weakly to raise his dagger against her. This man would never be taken alive.

Her limbs flowing lithely around her body, Irelia whirled to the side, sending the blades out in a deadly arc. They sliced cleanly through his flesh, as much an act of mercy as self-defense.

A simple turn, just one elegant step, brought the blades back to her, their edges slick with blood. The man’s lifeless body toppled forward.

“May the Spirit bring you to peace,” said Irelia.

Her burden was heavy as she returned to the camp. When she finally entered the privacy of her tent, she released a long, tense breath, and lowered herself to the reed mat.

She closed her eyes.

“Father,” she whispered. “I have bloodied our family’s honor once more. Forgive me.”

Irelia spread the blades out before her—like Ionia itself, they were the fractured pieces of something that had once been far greater, now turned to violent ends. She poured water into a small wooden bowl, and dipped in a rag. The simple act of cleaning the shards had become a ritual, one that she felt compelled to undertake after every battle she fought.

The water slowly turned red as she worked. But beneath the fresh blood, the metal carried much darker, older stains that she could never seem to remove completely.

Lost in thought, she began to slide the blades around, slowly reforming them into her family crest. Its three symbols lay cracked before her, representing the Xan name, her home province, and the rest of the First Lands, all in harmony. Her ancestors had always lived by the teachings of

Karma. They inflicted no harm on anyone, regardless of circumstance.

And now, here was their seal and crest turned into weapons, and takers of countless lives at that.

She could feel the eyes of her brothers upon her. Even in their eternal rest, at one with the Spirit of Ionia, she feared earning their disappointment, their resentment. She pictured her dear old O-ma too, broken and sobbing, devastated by each kill...

Many times, that thought had made Irelia weep more than any other.

The blades would never be clean. She knew that—but she would still do right by those she had harmed.

She passed many of her followers on her way to the burial grounds. Though they looked to Irelia for leadership, now more than ever, she recognized so few of them. With each winter the faces became less familiar, as the last of the old resistance were replaced by new and more zealous fighters. They came from faraway provinces, and towns she had never heard of.

Even so, she halted often to return their half-hearted salutes and bows, and would accept none of their help in dragging the shrouded body of her dead attacker along the road.

Finding an open patch beneath the blossom-heavy branches of a tree, Irelia set him down carefully, and turned to join in the grief of the widows and widowers, the orphaned sons and daughters.

“I know it is never easy,” she said, placing a consoling hand on the shoulder of one man, who knelt before a pair of fresh graves, “but each life, and each death, are part of—”

He batted away her hand, glaring at her until she retreated.

“It was necessary,” she murmured to herself as she prepared to start digging, though she remained unconvinced by her own words. “It is all necessary. The Brotherhood would grip this land in an iron fist. No better than Noxus…”

Her eyes fell upon an old woman, sat on a simple wooden stool at the foot of the tree, singing a soft lament. Streams of tears had dried on her face. She was dressed plainly, with one hand resting on a grave marker next to her. It was adorned with food offerings for the deceased.

To Irelia’s surprise, the woman halted her song.

“Bringing us some company, are you, daughter of Xan?” she called out. “Ain’t much room left round here. But any friend of yours is a friend of ours.”

“I did not know this man, but thank you. He deserved better than he was given in life.”

Irelia took an uncertain step closer. “You were singing one of the old songs.”

“Helps keep my mind off bad things,” said the old woman, tamping down a patch of dirt on the grave. “This is my nephew.”

“I’m sure you did all you could. Besides, this is all part of the Spirit’s way, you know?”

Her kindly demeanor had put Irelia entirely at ease. “Sometimes I don’t know,” she confided.

The old woman perked up, expecting more. Irelia continued, finally giving voice to the doubts that had plagued her for a long time.

“Sometimes… Sometimes I wonder if I killed our peace.”

“When Noxus invaded. Perhaps we lost something when we fought back, something we can never restore.”

The woman stood, trying in vain to open a large nut. “Child, I remember peace well,” she said, thrusting one gnarled, knobby finger at Irelia. “Those were good days! Nobody misses peace more than me.”

She pulled a knife from her belt, and began to pry open the nutshell.

“But the world’s a different place now. What worked then don’t work today. No point dwelling on it.”

At last, the shell cracked, and she placed the broken kernel into a bowl on the grave.

“See, there? Used to be able to open these with my hands alone, now I need a knife. The young me would’ve fretted about it, damaging the nut like that. But that me don’t matter, because she don’t have to live in the here and now.” The old woman nodded kindly, then went back to her singing.

For the first time in a long while, Irelia smiled. Within her satchel, wrapped in protective cloth, were the shard-blades of her shattered family crest. She knew it would never be clean, never be whole again.

But they were always ready, and that would have to be enough.
▲ TOP ▲

Lore and Events
Português do Brasil
Community content is available under CC-BY-SA unless otherwise noted.
Advertisement