The Spawn, also known as the Fountain, is the platform where champions spawn, respawn after dying, and teleport to after completing

Recall. While at the spawn, players can purchase their items from the nearby shop, quickly restore any missing health or mana, and protect themselves from invading enemy threat through the Nexus Obelisk.

Each team has their own spawn located behind their Nexus on the edge or corner of every map. They are located in the bottom left (blue) and top right (red) on

Summoner's Rift and the bottom (blue) and top (red) on

healing equal to 2.1% of maximum health and restore

mana equal to 2.1% of maximum mana, both every 0.25 seconds, to champions inside on their side of the map. Additionally, after 20:00, the health and mana restoration is increased and the Homeguard bonus will be given to champions that return to their spawn, granting them 75% − 150% (based on minutes) bonus movement speed that decays over 7 seconds.

Howling Abyss do not grant any effects while inside, and leaving the location a certain distance away disables the shop until the champion respawns.

The spawns in the

Players that disconnect from the match will automatically path towards their spawn. Upon arrival, their champion becomes completely immune to damage. This is to prevent enemies from spawn-killing. 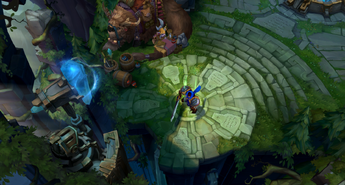 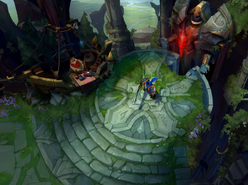 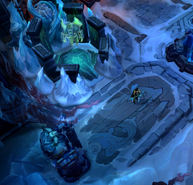 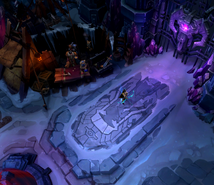