See through tints of Blue

Sparklefly are minor Celestial beings that resemble a common butterfly.

They have see through wings with a blue tint with only the vains on their wings having a light blue/white color. When flying, they leave a trail of stardust behind that resembles stars and constalations. They also have the ability to put someone to sleep. 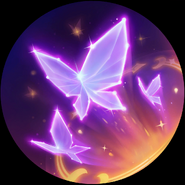 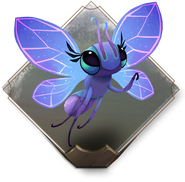