League of Legends Wiki
Register
Don't have an account?
Sign In
Advertisement
in: Lore of Zaun, Short Story, Urgot lore 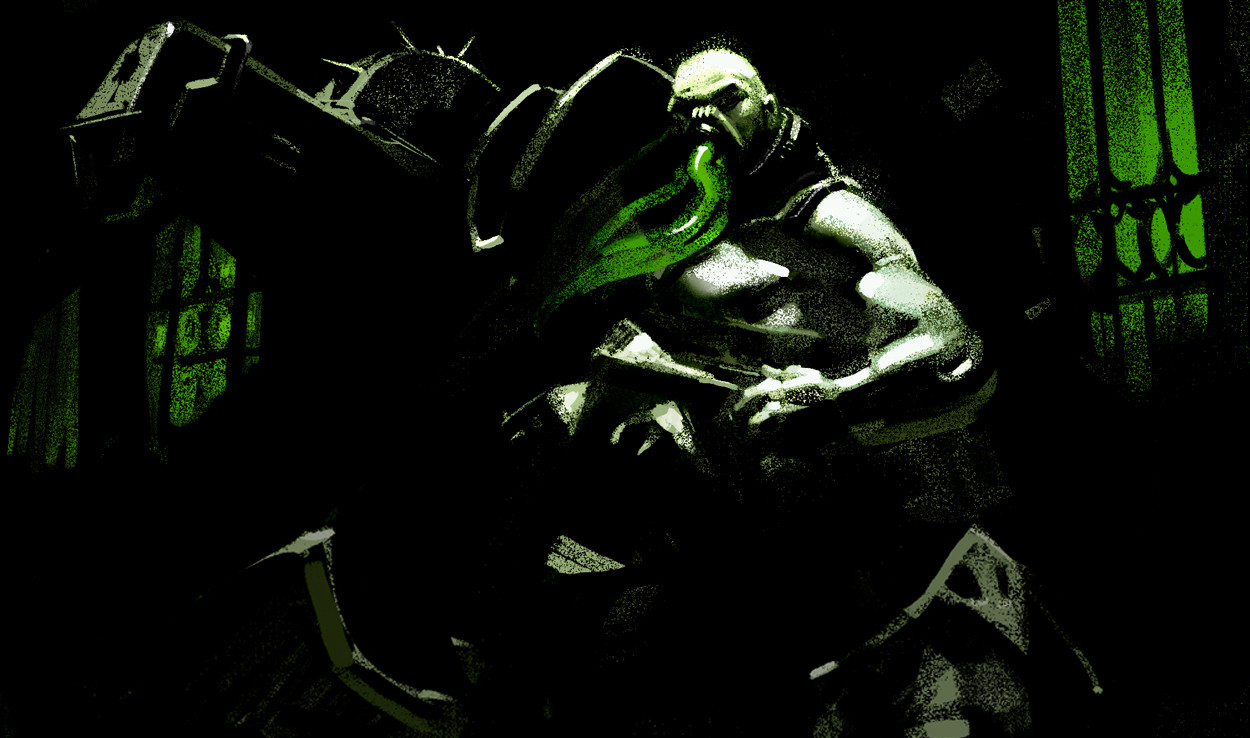 We were running through the streets of Zaun. The pipes and stained glass were blurred, smeared colors against the Gray, and the fog that hung in every chem-soaked alley. Zori was to my left, all matted hair and rusty knives—her smile was the only sign that she was beautiful beneath the grime. Blenk was behind her, with a spray-philter full of glowing paint and a head dripping with ideas. Scuzz brought up the rear, every bit the kind of lug you'd expect to be called Scuzz. But he was our Scuzz, every scuzzy bit of him.

We were running through the streets of Zaun. The pipes and stained glass were blurred, smeared colors against the Gray, and the fog that hung in every chem-soaked alley. Zori was to my left, all matted hair and rusty knives—her smile was the only sign that she was beautiful beneath the grime. Blenk was behind her, with a spray-philter full of glowing paint and a head dripping with ideas. Scuzz brought up the rear, every bit the kind of lug you’d expect to be called Scuzz. But he was our Scuzz, every scuzzy bit of him.

He yelled our gang’s name into the billowing smoke, marking the night as ours.

We laughed, and yelled it too. We were young, we were alive. Nothing could stop us. It would have to catch us first, and we were still running.

The city itself seemed to carry us forward as we slid down into its depths, farther and farther from the sump-scrapper we’d just robbed and left bleeding in the gutter. His cogs still jangled in our pockets. More than enough for a bit of fun. We were on our way to the Black Lanes, the market at the heart of Zaun.

“Think they’ll sell us any shimmerwine?” Zori asked. “Bleedin’ that sumper made me a mite parched.”

Blenk scoffed. “They’d sell shimmer to a child in the Lanes. And then they’d sell the child.”

“Gob it, both of you,” Scuzz growled, catching up. His face showed a kind of concern that I’d never seen before, a frown slowly forming. “Can’t you hear that?”

I squinted my eyes and peered into the night—since you can’t squint with ears, you ken? Not without a few augments. “I can’t hear nothin’,” I said with a shrug. “Not even a plague rat’s brown cough.”

“That’s what I mean,” Scuzz muttered.

And the silence after… It weighed heavier even than Piltover, glittering above us. Pushing slowly into the market through the fog, we found dram-carts overturned, their wheels spinning lazily. Stalls abandoned, still full of exotic wares. There was a stench in the air that reminded me of the sump-scrapper—a stench strong enough to make my eyes water, when even seeing him bleed had not.

And there were bodies here, too. Many of them were wearing a chem-baron’s emblem. They’d been torn to pieces, the cobbles red beneath them.

It was a massacre.

“Nasty bit of work, eh?” Blenk grinned, rooting through one of the dead men’s pockets, carefully picking away giblets of flesh. “Guess that means we’re gettin’ a discount.”

Zori only shuddered. “There’s someone… in there,” she whispered, pointing into a cloud of raw chemtech that was spewing from a pipe in the clearing beyond. It was the source of the stench that was only growing stronger, crushing my senses, somehow making my ears hum. “It’s… It’s a man.”

“That’s not a man,” I murmured, following her gaze into the growing green veil. “Not anymore…”

It was a hulking shape, with mechanical legs and many guns, fused savagely to its flesh the way a mechanician would fuse two pipes. Burning and searing. Just looking at it made me wince. In one hand, it held a much smaller figure aloft. A man, choking in the chemtech cloud. As he writhed, the monster taunted him, its voice a mechanical buzz vibrating deep in my gut, threatening to loose the bowels within.

“This is what you want,” it almost cooed, cruelly forcing the man’s face into a rent in the pipe, the chemtech gas gushing out around them. “Breathe it. Make it yours.”

But the man only writhed, kicking uselessly, growing weaker and weaker—until finally, only his augmented arm still jittered, echoing his last, desperate thoughts. Even after they ceased. And with that flash of brass, it hit me. The dangling corpse, he was a chem-baron, the only kind of person who could afford newfangled kit. Baron Crimson, or somesuch. These were his men, scattered around us.

Were his men. And now…

“We have to get out of here,” I gasped, turning from the carnage to my friends behind me. But I couldn’t see them. The gas from the pipe, it was spreading, a toxic green cloud making it harder to breathe… Harder to… to…

I could hear Zori, Blenk and Scuzz panicking and coughing somewhere nearby. I reached out into the swirl for anyone, anything, to pull along with me as I made my escape. But there was only the sound of a body slumping softly to the ground, a spray-philter rattling across the cobbles. Blenk. I stumbled as the truth hit me. He was gone.

And the worst was still to come.

The monster pushed itself through the cloud, a massive, armored leg slamming down beside me, and then another, and another—all revealed chemtech-filled tubing, and protruding gun muzzles that smoked with the very same heat still smoldering in the bodies around us.

I could taste it at the back of my throat, a truth as bitter as the acrid air. I was going to die here.

The monster grabbed me by my ragged scruff, lifting me close enough to see its face. It was a visage of terror, all the more horrifying because it was human. More human than the rest of him, at least. His tox-mask glowed as it vented pure alchemy, but his eyes were somehow even brighter. Intelligent. Almost seeming to smile as they took my fear in.

“A son of Zaun. What is your name?” he growled as he brought me closer. His accent was sharp, but I couldn’t place it. His words battered my resolve, each one hitting with the force of his hate.

I couldn’t even stammer an answer.

He laughed. “The baron, you recognize him? Like many, he tried to rule this city, casting countless people into the depths, to mine this…” He breathed in deeply as the gases swirled. “…this misery. Now he is no more, killed by that which gave him power over others. It is you, the gutter rat, at home in the squalor, who survives. So, tell me, which of you is stronger? Which of you deserves to live?”

Suddenly, I was falling back to the ground, landing on top of my friends. They were shuddering, choking as the chem-baron had. Scuzz, his mouth was foaming. And Zori… I closed my eyes against the tears before I could see what had happened to her.

“Run,” the monster said. “Tell the city how you survived and a baron did not. You will be my witness. The first of many.”

“Run!” he bellowed. I saw Zori then, sobbing, reaching out for help with the last of her strength. I didn’t want this to be the way I would remember her. I wanted to remember her smile. I still do.

But I was running again, through the streets of Zaun.

And can you imagine how it felt to realize, with burning lungs and heaving breaths, that my screams were the message I was to bear?

I was alive. My friends were not.