League of Legends Wiki
Register
Don't have an account?
Sign In
Advertisement
in: Lore of Freljord, Short Story, Gnar lore 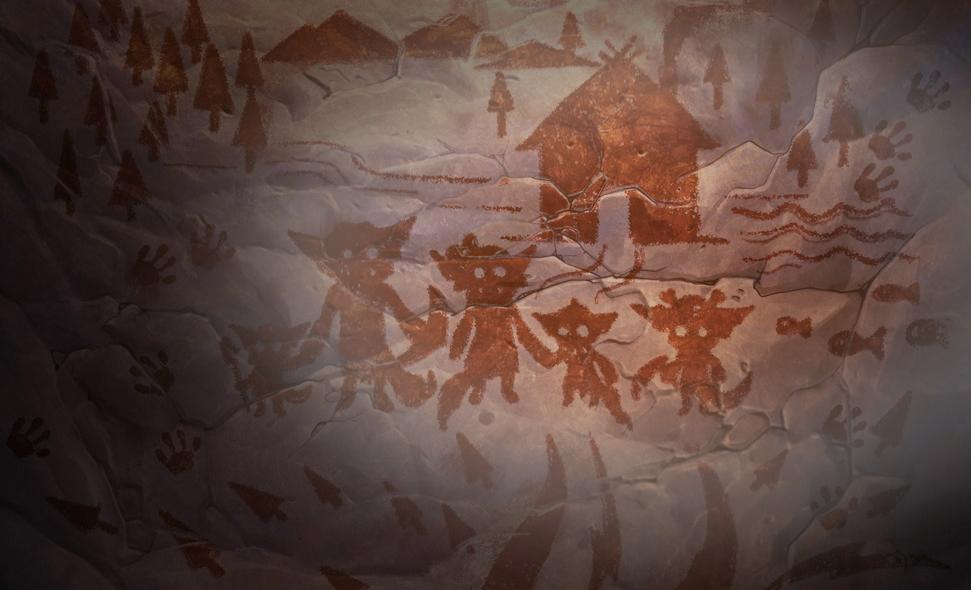 Gnar bustles about, annoyed at the world. He has been drawing in the snow under the shelter of rock and stone, but nothing appears the way he imagines. Gripping a bone boomerang almost the size of his torso, the young yordle curses at the ground.

“Shubbanuffa!” says Gnar. This means one of two things. Either he believes the snow is being uncooperative, or he wants some sweetmilk. No one can say for certain.

With a jump and a skip, Gnar tumbles from one unfinished sketch to another, each depicting similar scenes. There they are, bands of carefree yordles living happily among the tribes of the frigid north. Sometimes, wild beasts stand a head above his kin. Other times, Gnar himself towers over everyone else. These little differences do not faze him. Instead, his wide eyes fixate on his boomerang, his paw guiding it to trace out a grand shape with long, sweeping strokes.

“Onna legga,” Gnar mutters to himself. This means he wishes not to be distracted. In the past, others have confused this with “Oga lagga,” meaning he would very much enjoy a hug.

Placing the boomerang in his mouth to free up his paws, Gnar leans downward. His claws pick away bothersome specks of dirt. His nose sniffs the ground, searching for any stray pests daring to deface his work. Pleased with the results, Gnar somersaults back to take a wider look.

The powdery snow paints the picture of a one-eyed monster with tentacles the size of mountains.

“Wabbo!” Gnar cheers, as his boomerang drops from his jaw. The monster is the right amount of scary—just as he imagined. With one arm, it slices through an entire herd of elnük. With another, it holds a whole bundle of elkyr, like sticks.

“Ganaloo mo,” Gnar grumbles. Upon further inspection, it appears his elnük look too much like elkyr. This will not do. As he moves to touch up his piece, he stops. His large ears perk, their violet insides twitching with vigilance.

Footsteps approach in fours from outside his cave. Perhaps it is the monster, and perhaps it has come to express its discontent with how it is being portrayed.

Grasping his boomerang, Gnar stands upright on his two hind legs. “Nakotak!” he declares, ready to face his rival once more. In truth, he is thrilled. Ever since he woke up from that long nap, he has wondered where the monster took his friends. Finally, he is about to get some answers.

But what trespasses into his cave sees with not one eye, but two.

And rather than tentacles, it has legs, stout and stocky. Coarse fur covers its entire body, forming a frosted mane to crown its head and back. Its scarred face appears worn and bitter, marked by two ivory tusks and a stiff, pudgy snout.

This is a strange-looking creature, Gnar thinks to himself.

As the giant drüvask boar lumbers inside, it sees only the comfort of stone overhead. Its sighs are deep, its breath strands of mist fogging the chill air. The beast’s hooves shake the ground beneath, stirring up snow like splashes of milk. After a few heavy steps, all of Gnar’s art is ruined.

Gnar’s boomerang strikes the boar right between its eyes. The dazed beast shakes its head, blinking hastily as it lets out an angered growl. Gnar pants in a frenzy, wielding his prized weapon up high, enough for the boar to identify its source of pain.

Like thunder and lightning, the cave booms twice with roars of rage.

Tumbling out come the boar and a positively enormous yordle. Grown to a size larger than even his foe, Gnar pummels the intruder with his now massive, fisted hands. His wrath fuels every punch, jabbing blow after blow into the boar’s thick hide.

The fight seems to end as quickly as it began, until the savage beast somehow wrangles its hooves under Gnar’s chest to kick him away. The colossal yordle collapses next to his cave, bundles of snow rising as he lands. With his spiny back exposed, his head woozy, Gnar hears repeated huffs and puffs, and the clatter of those same bullish hooves scraping faster and faster on the wintry soil.

The blizzard wails, louder than before, as though the Freljord is bracing itself for the coming loss of one of its own.

“GNAR!” the hulking yordle bellows, leaping away from the boar’s charge. In a flash, he slams his bulky arms against the beast’s behind, sending it forward to crash into the rocky wall of the cave’s entrance.

Gnar trudges toward the beast, his breath short and rushed. He nudges its limp body with his foot. There is no resistance.

He decides it has fallen asleep, but remains perplexed why its eyes are open. Curiously, the snow around the boar turns a deep red. All of this seems quite odd, and yet, it is not the first time this has piqued Gnar’s interest.

His memory flickers with similar images. Before the long nap, he would see different tribes yelling gibberish as they threw pointed sticks at one another. Their game looked at once exciting and exhausting, and Gnar would watch them until enough of one side fell asleep on red snow. They must have been awfully tired, just like this strange, tusked yordle.

Thinking of those bygone days makes Gnar quiet. He remembers waking up from the long nap, believing the world took away everything he ever knew. His breath slows, his shoulders slump, his feet shrinking until even he would not believe that he stands in his very own footprints from mere seconds ago.

The small yordle dashes into his cave to retrieve his boomerang, hugging it with all his might. It is the one thing that did not leave him after the long nap.

For a moment, Gnar glances at the boar. It rests out in the elements without a whisper. Setting his boomerang lightly on the ground, he skitters back into the storm.

The blizzard surges on. Gnar is not bothered, but maybe, the slumbering beast is. With his tiny paws, he gathers all the snow he can, and carefully places it atop the boar.

It is sleeping after all, and it will need a blanket.