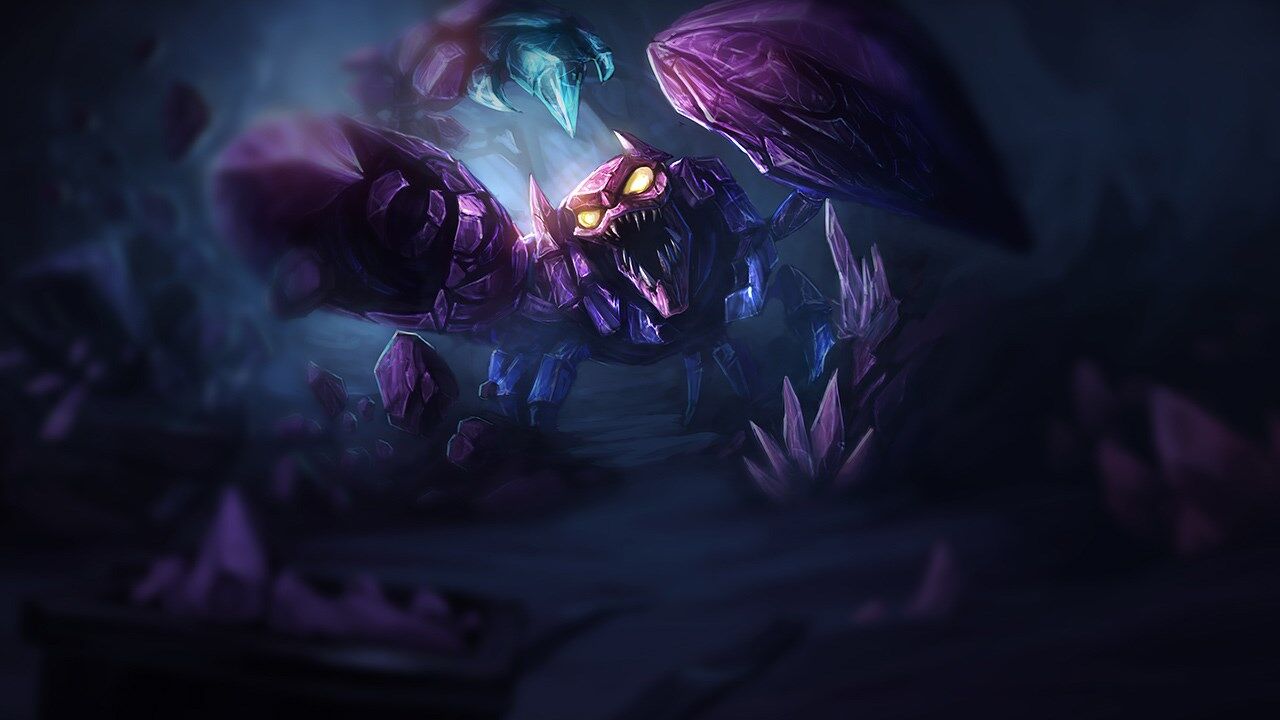 Skarner is a champion in League of Legends.[1]

Crystal Spires can be captured by

minions have spawned by standing near them for 2 seconds. Once captured, Crystal Spires are owned until contested and the defending team can stand on the spire to prevent the opposing team from capturing it.

30 gold split among its captors upon being captured, or

15 gold if only a single champion participated in its capture. Capturing a Crystal Spire grants

sight of its radius for 1.5 seconds and renders it unable to be captured again for 15 seconds.

Skarner gains Crystal Charge while within range of a Crystal Spire controlled by his team, for 1.25 seconds after triggering

Crystal Venom, and for 1.75 seconds after stinging an enemy champion with

Active: Skarner slashes around himself, dealing physical damage to all nearby enemies.

If an enemy is hit, subsequent casts of Crystal Slash within 5 seconds deal bonus magic damage.

cooldown by 0.25 seconds, quadrupled to 1 against enemy champions.

Active: Skarner crystallizes himself, gaining a

shield for up to 6 seconds.

bonus movement speed that increases in effectiveness by 100% over the first 3 seconds.

Crystal Venom or stings an enemy with

cooldown is reduced by the corresponding base duration of the disable.

Active: Skarner launches a blast of crystalline energy in the target direction, dealing magic damage to all enemies within its path and

slowing them for 2.5 seconds, as well as marking them with

Skarner's next basic attack against a target marked with

champion over the cast time and attempts to impale them with his stinger. Upon successfully impaling the target, he deals them 60% AD physical damage and bonus magic damage and

suppresses them for 1.75 seconds, during which they are

revealed and Skarner can drag them with himself. At the end of the duration, the target takes the same damage again. 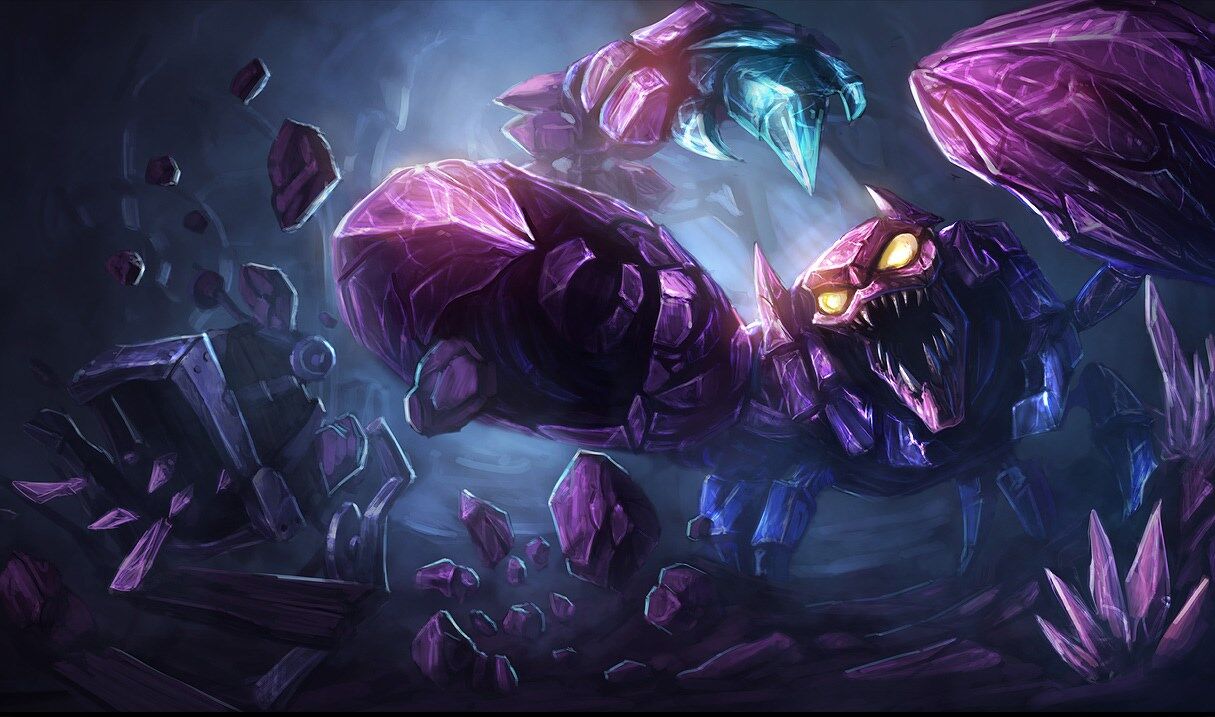 880
09.08.2011
Skarner is an immense crystalline scorpion from a hidden valley in Shurima. Part of the ancient Brackern race, Skarner and his kin are known for their great wisdom and deep connection to the land, as their souls are fused with powerful life crystals which hold the living thoughts and memories of their ancestors. In an age long past, the Brackern entered hibernation to avoid untold magical destruction, but recent, threatening events have roused Skarner. As the only Brackern awake, he strives to protect his kind from those who seek to harm them. 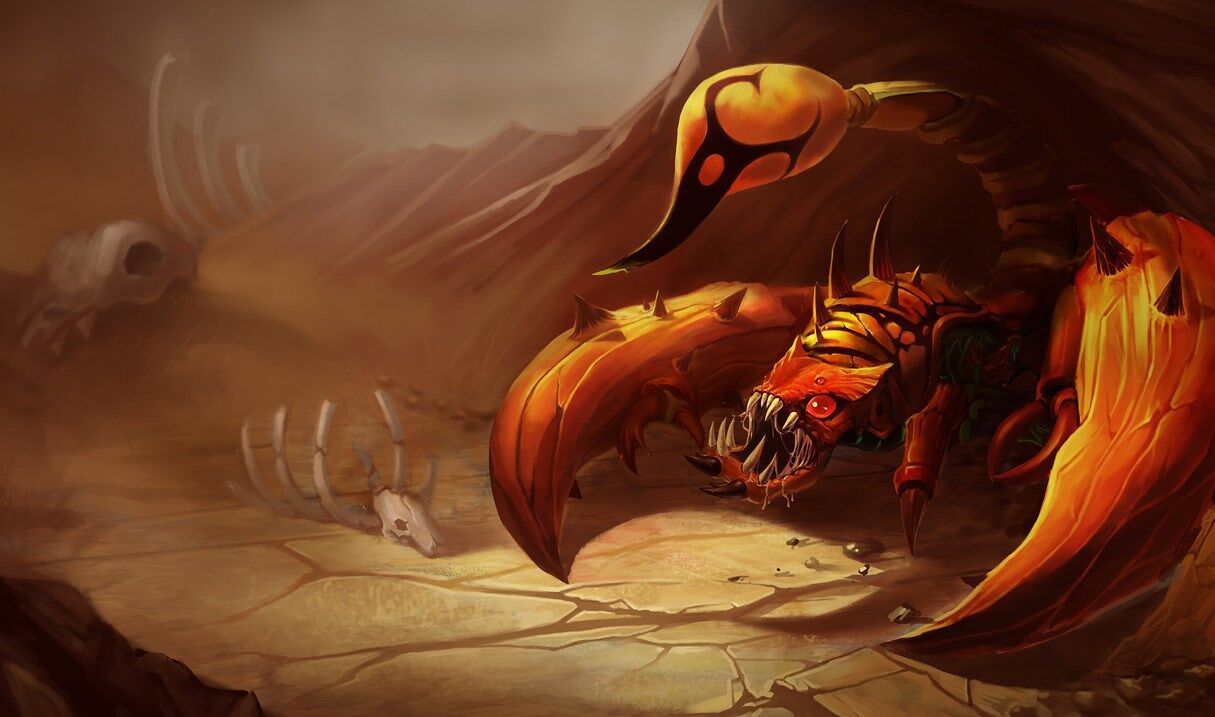 975
09.08.2011
Travelers seeking their fortune on the open prairie must take special care at night, when massive, carnivorous scorpions are lured by the flickering light of campfires. More than one caravan has been lost to the creatures, the bones of their passengers picked clean. 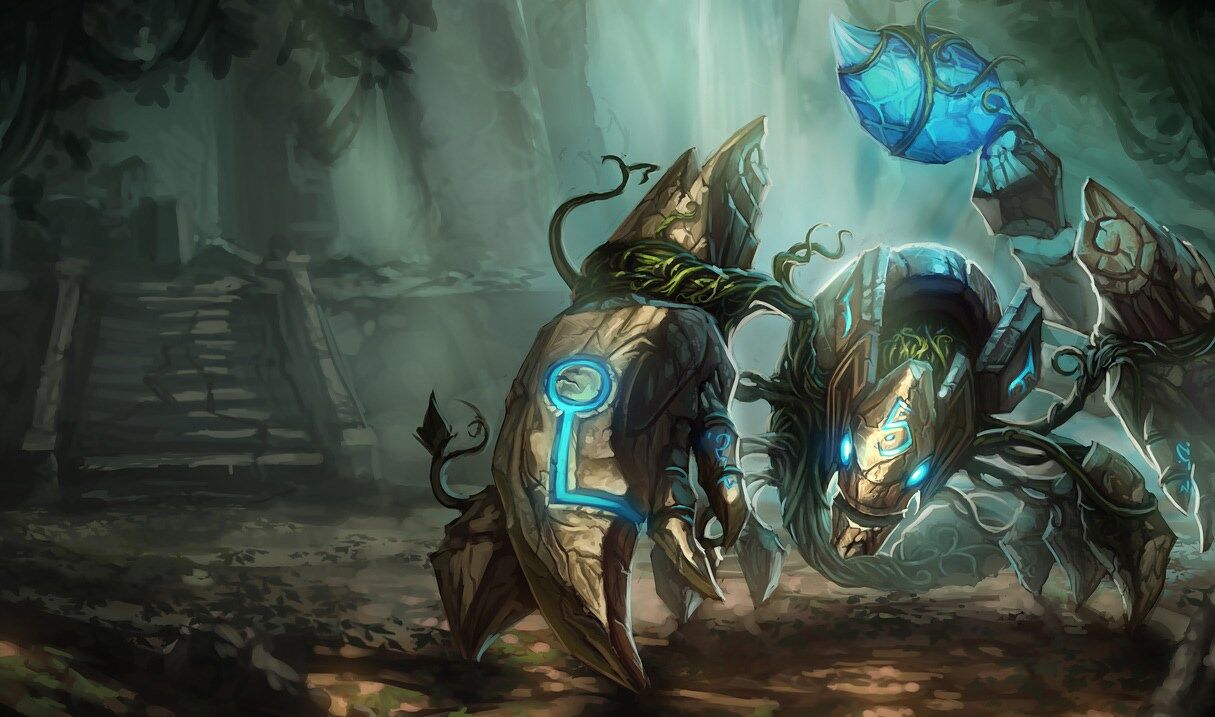 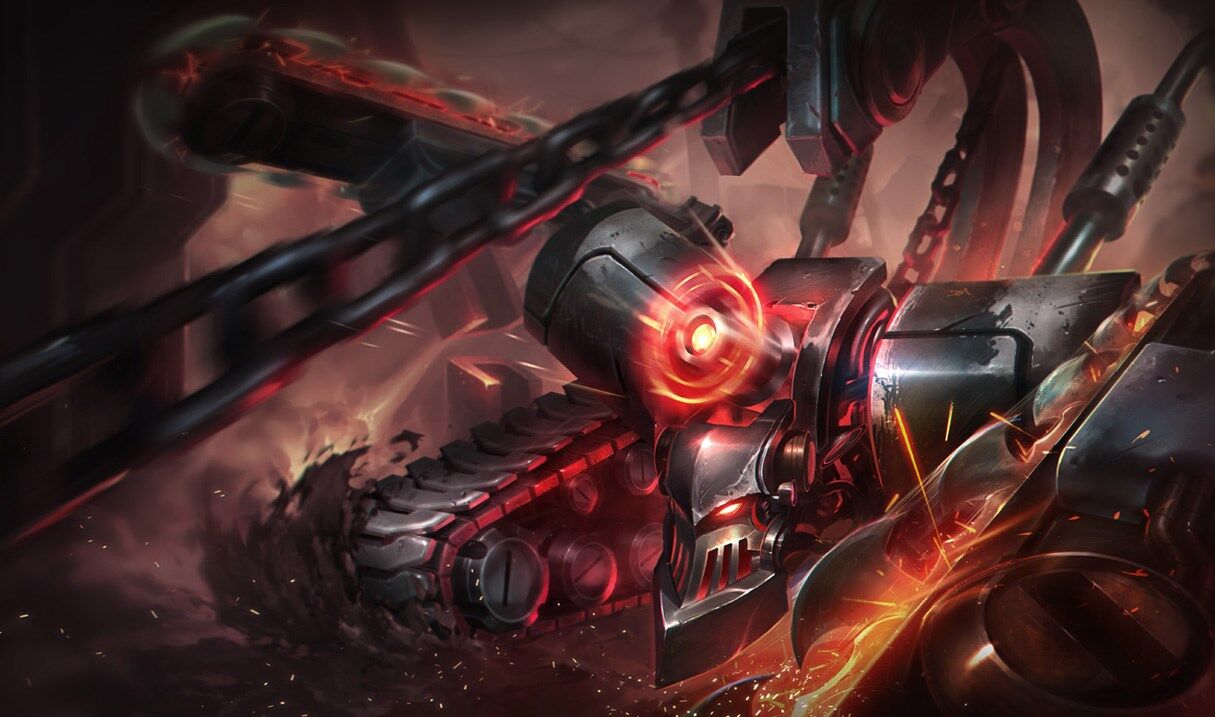 1820
25.11.2014
An early prototype that would pave the way for the Battlecast machines, Alpha Skarner is possessed of an extreme rage not seen in later models. Perhaps the brain inside it wishes to inflict as much pain as it experiences—or maybe it just likes to kill things. 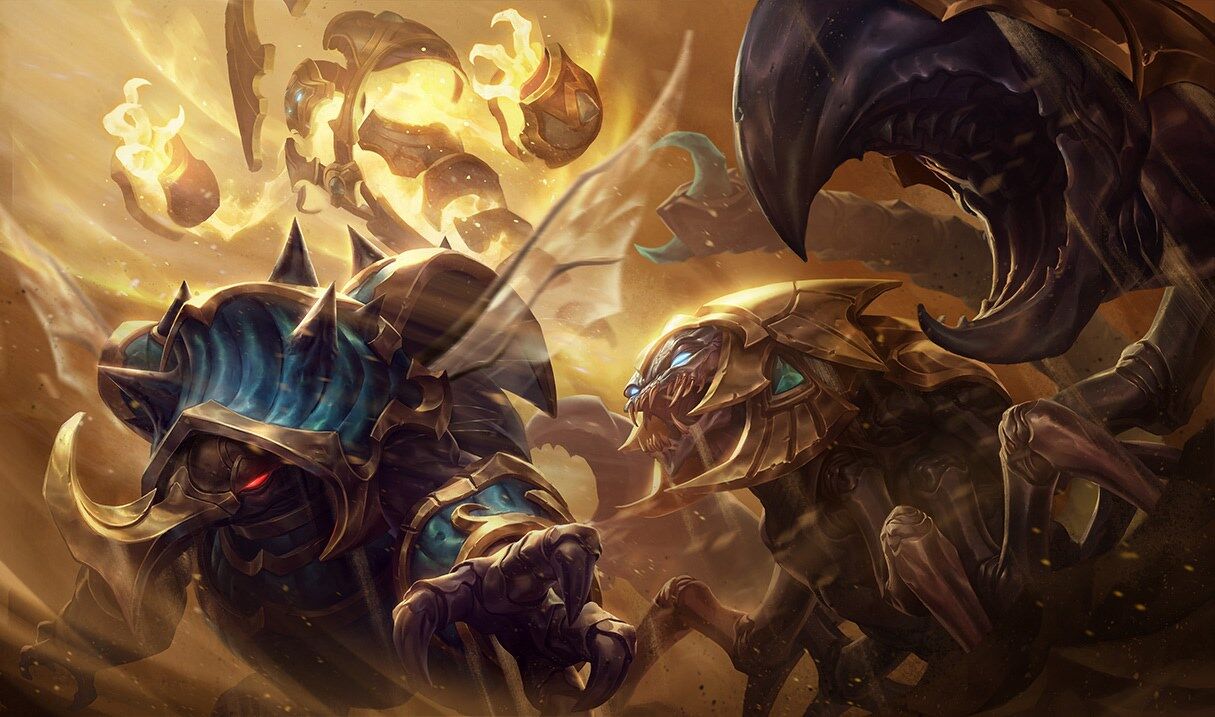 975
26.04.2015
Skarner, the gilded scorpion—ancient guardian of the sands, we invoke thee to protect us from an evil of our own making. Let no man tread upon these hallowed grounds, lest in your rage they are torn asunder. 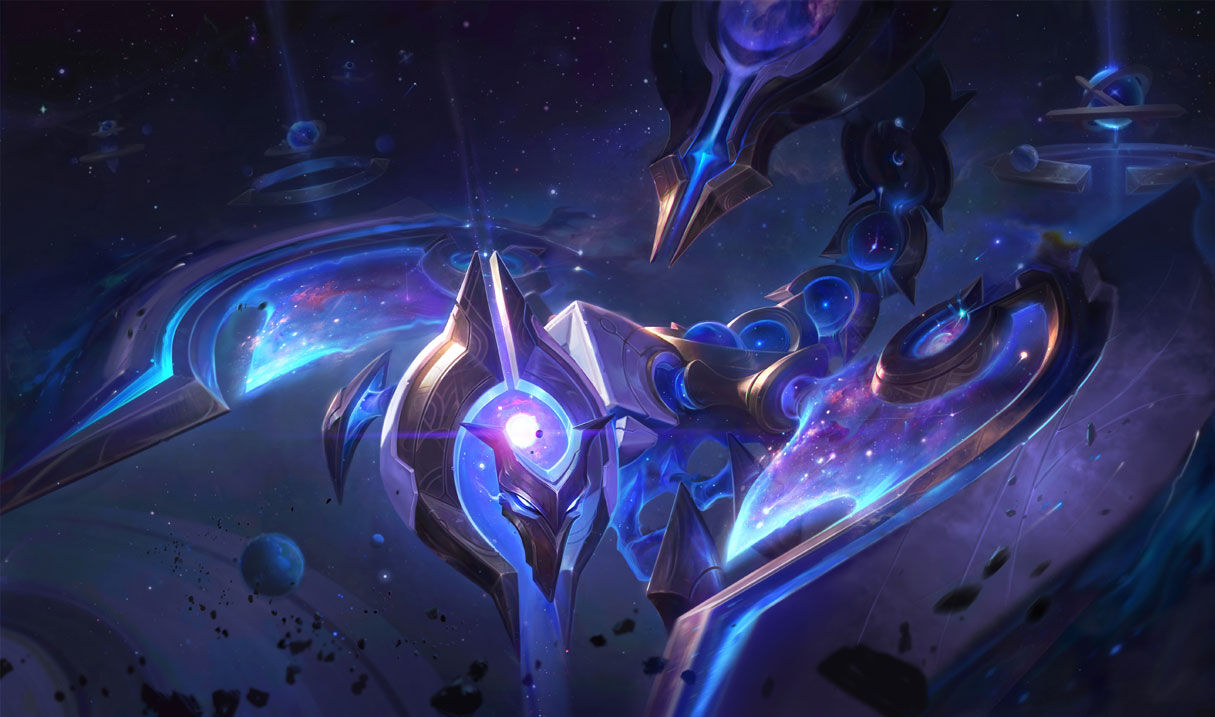 1350
24.11.2020
An ancient creature of deep, primal wisdoms from before the forming of the first galaxies, Skarner is composed of the very elements that are the building blocks of all the cosmos. His kind are the radiant antithesis of the ancient, squirming things that lurk in the deep darkness of space, and beyond it. 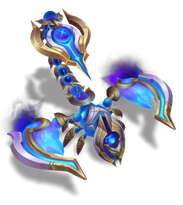