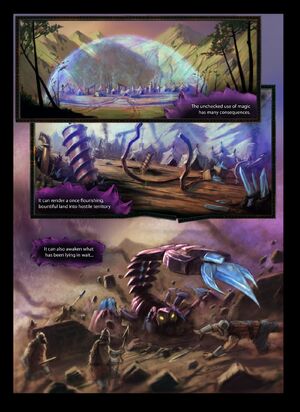 While designing a champion for League of Legends, it's important to ensure that your concept appeals to a broad audience. For instance, if you're out to strike a chord with the monster enthusiasts, amateur arachnologists, and horror movie buffs, it's good to also incorporate something for those of a more refined mindset. And while we're on the subject of multifaceted design, allow me to introduce

Skarner, the Crystal Vanguard. One part monster, one part crystal, Skarner is sure to please whether you're wearing a button up or wielding a butcher knife.

Of course, if you're having trouble persuading everyone to agree, keeping a gigantic scorpion waiting in the wings to menace them with the threat of

impalement on its massive tail isn't a bad backup plan.

Today, I wanted to give a little sneak peek into the gameplay behind

The idea behind Skarner is to get on people, stay on them, and really capture that inevitability of being run down by a predatory creature. Additionally, we wanted to avoid an instant gap closing mechanic so there's appropriate counter-play.

The primary way Skarner accomplishes this mission is through his ability

Crystal Slash and his passive,

Crystal Slash does a quick, point-blank AoE and empowers the ability if it hits. Empowered casts will do bonus damage and slow (making successive uses really useful for sticking to his target) His

passive is central to his gameplay as a whole. For example, Skarner's ability

Crystalline Exoskeleton puts up a shield that grants additional movement and attack speed while it's up. The bonus attack speed will help greatly decrease the cooldown time of his abilities, leading to additional

Crystal Slashes or more up-time on this steroid.

ultimate causes him to skewer an opponent with his tail and drag them around for a few seconds. The positional manipulation of the ability can turn a teamfight by peeling an enemy off of a wounded ally, or dragging a greedy enemy into a tower.

Players have been asking for another monster champion for a while, so we're happy to deliver Skarner, our own weaponized arachnid.

Skarner has one of the coolest

ultimates in the game and we think that's A Good Thing, but we also wanted to give him a few more toys to be excited about when

kidnapping isn't on the docket. We wanted Skarner to have something truly unique to him - here's where we ended up:

Whenever Skarner is in a game, six

Crystal Spires appear on the Rift. They're located by

Crystal Spires are capturable, just like the altars on Twisted Treeline. When someone on the lonely scorpion's team captures a spire, it creates a zone that gives Skarner (only Skarner!) pretty significant boosts to his movement and attack speed. The enemy team can capture them too and, when they do, they gain gold, a short burst of vision, and temporarily lock Skarner out from his super meaningful buffs. That's the key - with these changes, Skarner becomes a neutral objective control king, and super useful for teams looking to overcome their enemies with buff and map control.

Retrieved from "https://leagueoflegends.fandom.com/wiki/Skarner/Development?oldid=2988540"
Community content is available under CC-BY-SA unless otherwise noted.