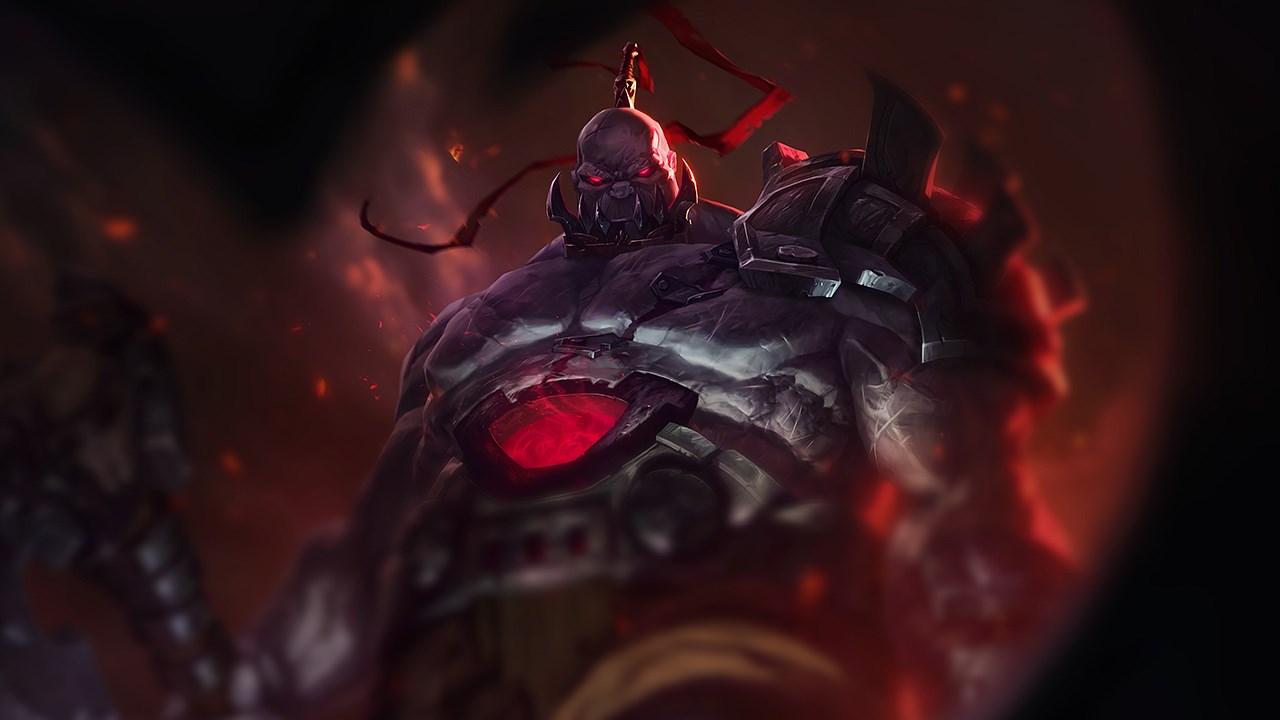 Sion is a champion in League of Legends.[1]

stasis for 1.5 seconds to

health regeneration and any

healing (except life steal) he receives during this time is 0% effective.

Sion can only move and use his basic attacks and item actives, and empowers himself with the following effects:

Sion's damage to structures is reduced to 40% under the effects of Glory in Death.

Once at least one ability has been learned, Death Surge can be cast using any ability key, even for the abilities that haven't been learned yet.

charges for up to 2 seconds to increase Decimating Smash's

range over an area,

stun duration, and damage every 0.25 seconds, which has up to a maximum bonus for the base damage and up to a 200% bonus for the scaling damage.

Decimating Smash can be recast within the duration, and automatically does so afterwards. If the charge is

interrupted, Decimating Smash is placed on a

Recast: Sion flails his axe in the target direction, dealing physical damage to enemies hit and

slowing them by 50% for 0.25 seconds. Decimating Smash deals 150% damage against

monsters and 60% damage against

If Decimating Smash was charged for at least 1 second, Sion instead slams his axe down in the target direction, dealing physical damage to enemies hit and

knocking them up for 0.5 − 1 (based on channel time) seconds and

4 bonus health whenever he kills an enemy, increased to 15 for large enemies and

shield that lasts for up to 6 seconds. Soul Furnace can be recast after 3 seconds while the shield holds, and does so automatically at the end of the duration.

Recast: Sion consumes the shield to deal magic damage to nearby enemies, capped at 400 against

Both of Soul Furnace's casts can be activated during Sion's other abilities, other than the release of

Roar of the Slayer

Roar of the Slayer

Active: Sion bellows a shockwave in the target direction that deals magic damage to the first enemy hit,

slowing them for 2.5 seconds and inflicting them with

If the target is a

monster, they are also

stunned for 0.75 seconds and

knocked back for up to 1350 units further, though not through terrain, applying Roar of the Slayer's effects to enemies they pass through as well as briefly granting

sight of the area around their trajectory.

immune to crowd control and

ghosted and, after a brief delay,

charges forward in the direction of the cursor for up to 8 seconds, during which he is able to steer at a slow turn rate while automatically navigating his movement. Unstoppable Onslaught can be recast after 0.4 seconds during the channel.

At the end of the charge's duration, Sion

leaps forward 300 units, landing after 0.55 seconds and slamming the ground beneath him. Sion will stop upon colliding with an enemy champion or terrain during the charge, ending Unstoppable Onslaught with a slam. Crashing into terrain

Enemies hit by Sion's charge are dealt physical damage. The base damage increases by 0% − 166.67% (based on channel time) and the

turrets, hit by the slam are dealt the same physical damage and are

slowed for 3 seconds. Enemies in a smaller radius are also

pulled towards Sion over 0.5 seconds and become

Recast: Sion stops charging, causing him to leap forward and slam the ground beneath him as if Unstoppable Onslaught had reached the end of its duration. 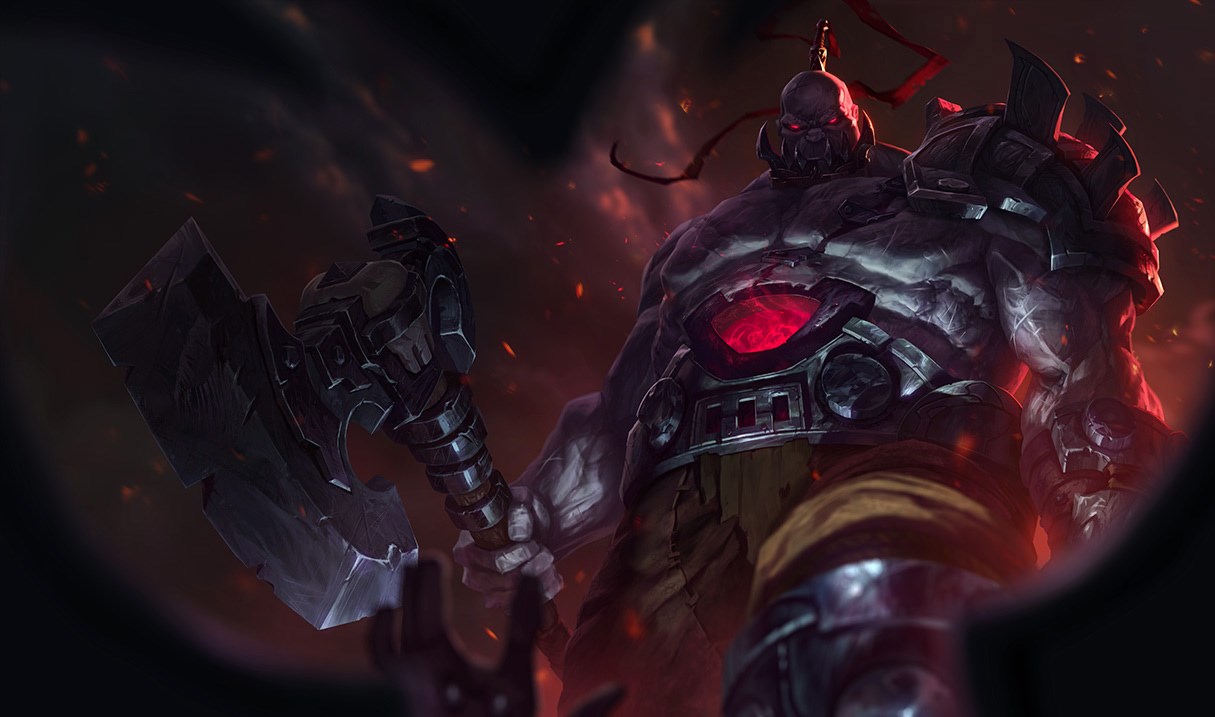 585
21.02.2009
A war hero from a bygone era, Sion was revered in Noxus for choking the life out of a Demacian king with his bare hands—but, denied oblivion, he was resurrected to serve his empire even in death. His indiscriminate slaughter claimed all who stood in his way, regardless of allegiance, proving he no longer retained his former humanity. Even so, with crude armor bolted onto rotten flesh, Sion continues to charge into battle with reckless abandon, struggling to remember his true self between the swings of his mighty axe. 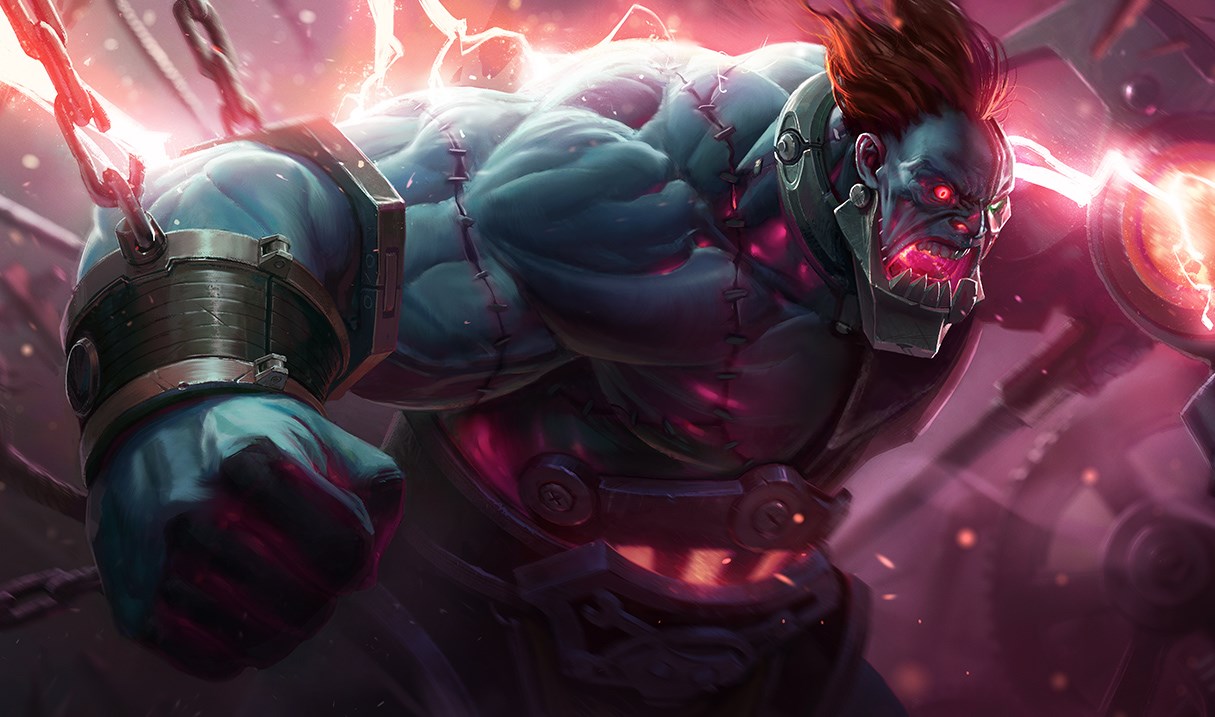 520
01.06.2010
Over the years, many have asked—should art be chained by the fleeting concept of morality? Or should science bend a knee to the laws of man? Some believe progress is not made by holding ourselves back, and though we may give birth to monsters… Hextech will always guide our path... 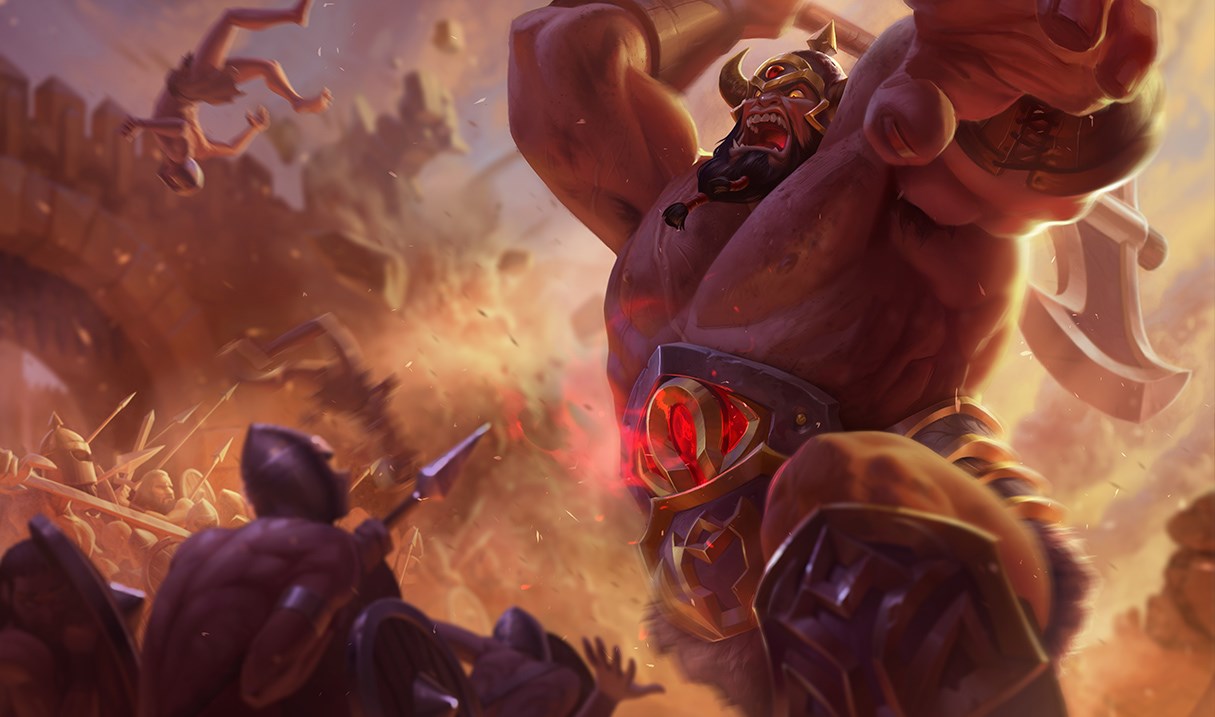 750
26.09.2010
Avoiding every social cue his roleplaying group throws his way, Sion has repeatedly rolled barbarians only to die immediately after rejoining the table. At this point he's spent more time working on character sheets than actually playing Rift Quest, and it shows: his newest barbarian's backstory reads, “Is a barbarian.” 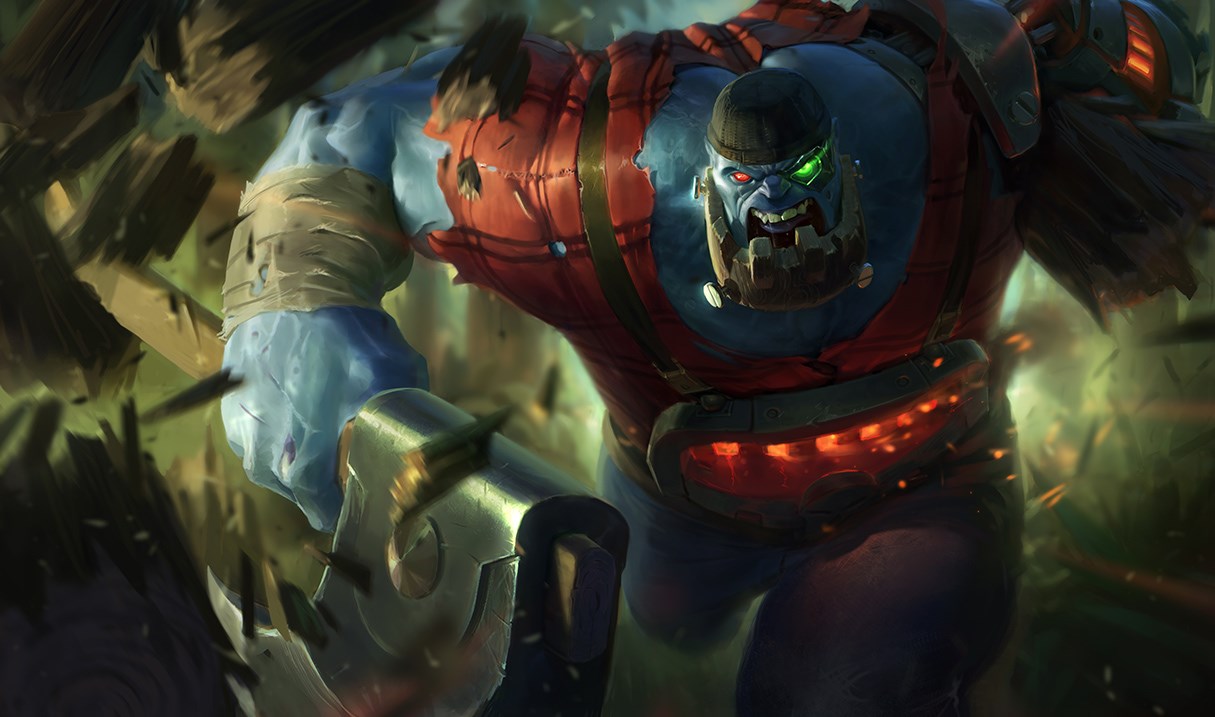 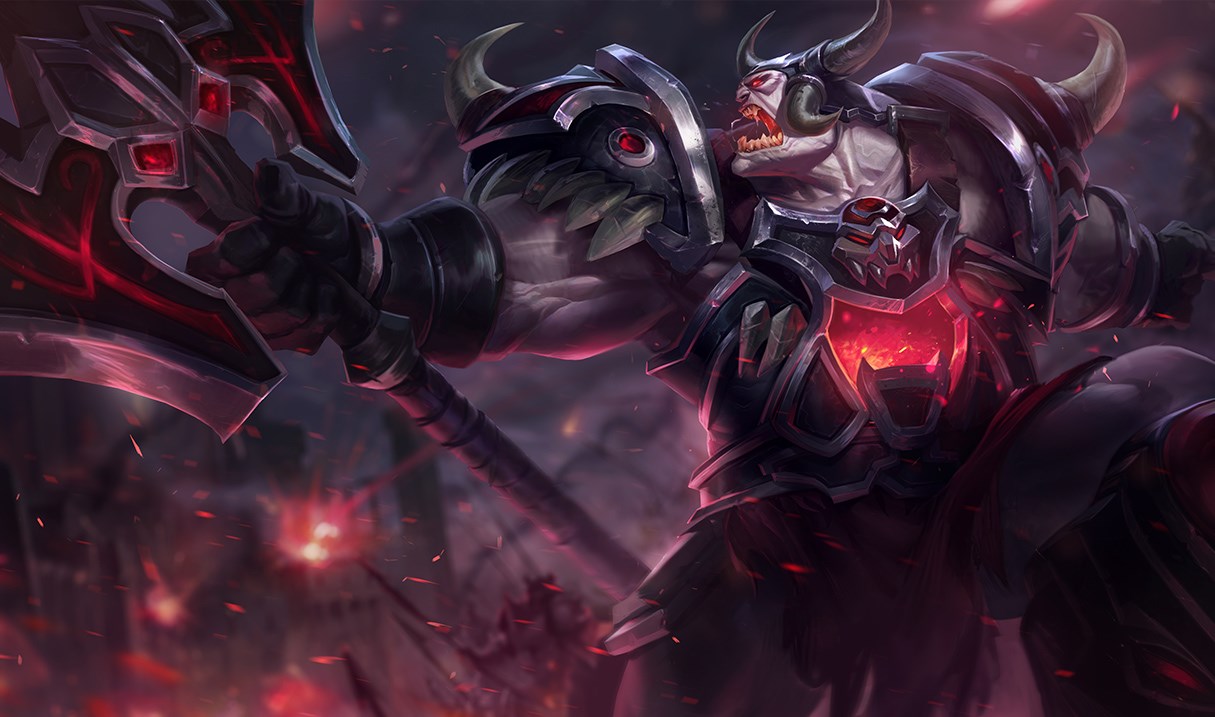 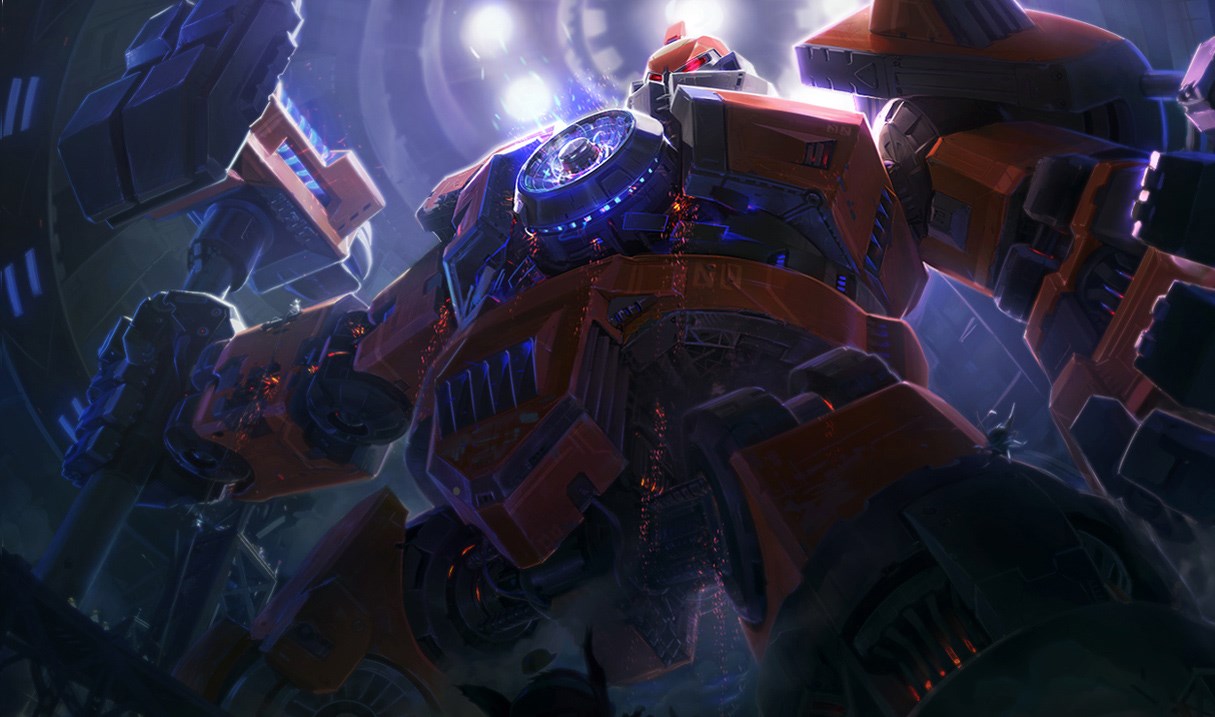 1820
13.04.2016
The ultimate ground-based mecha unit, 0-SION becomes like a freight train once given a combat directive, and will literally stop at nothing to dismantle an opponent—no matter how much damage it takes. There are lingering concerns that it could go rogue, but so far these worries have been unfounded. 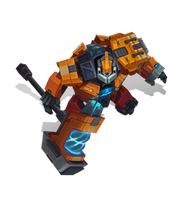 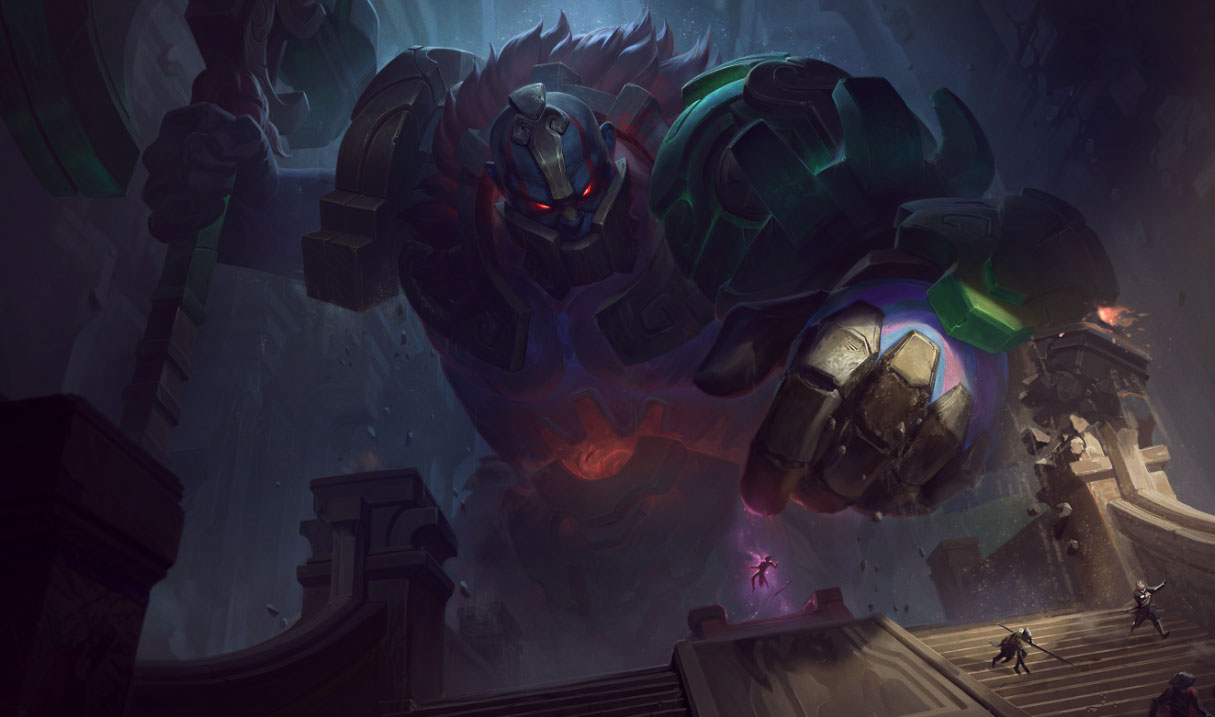 1350
09.04.2020
A once towering fortress toppled during the last annihilation, the thing called Sion was given consciousness by Malzahar, and raised up to become the purest titan of death and destruction. Now, imbued with ravenous hatred, he blasts the terrain with every step, hellbent on culling any instance of life. 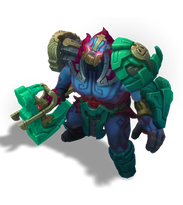 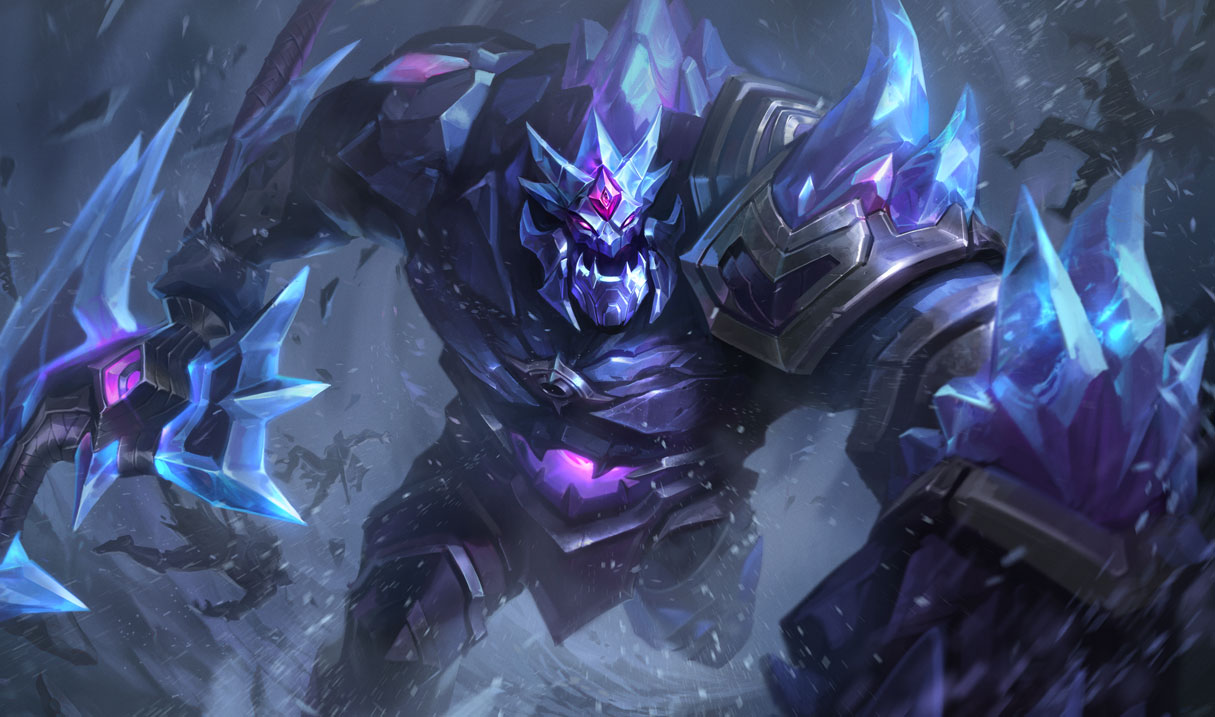 1350
15.04.2021
A fearsome jötunn who once stood at the front of Lissandra's vast armies, Sion fell in battle only for his master's magic to weave itself beneath his massive frame, resurrecting him as a monster of rage and cold. 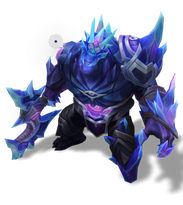 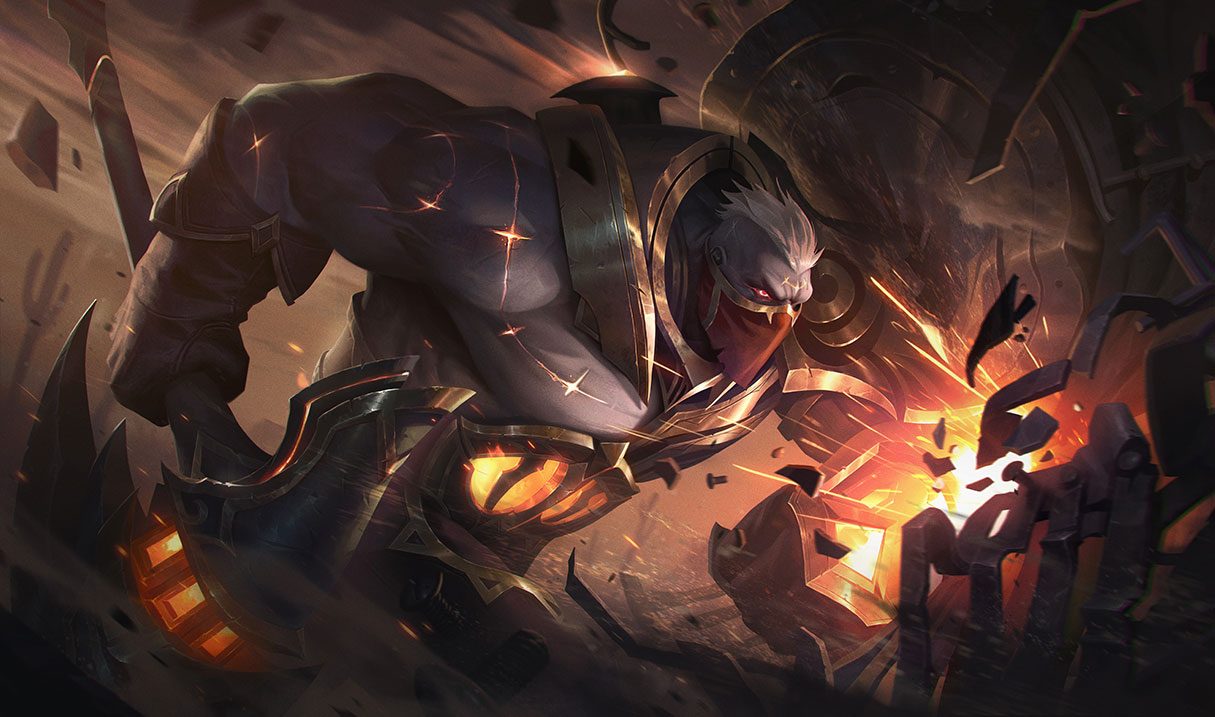 1350
26.05.2022
As soon as Sion knew life, he knew rage: rage that ripped the restraints from the operating table; rage that crushed the bones of those men who tried to play at the miracle of Creation; rage that he ain't, nor ever would be, the second clockwork angel they had hoped to construct. Sion knows rage, and so will the world. 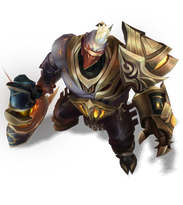