Silver Age is a series of alternate future/universe skins in League of Legends. It is set in a world where each champion is a super hero / villain. 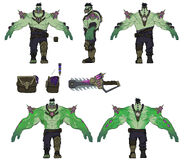