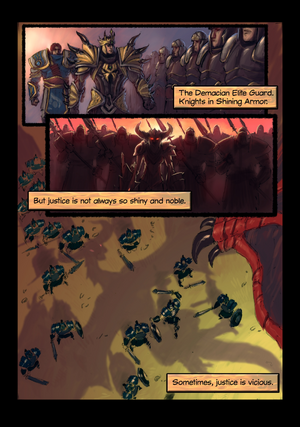 Eventually everyone has one of those moments where life throws them a curve ball and they learn that you sometimes meet people who are full of surprises. So, when we first ran into

Shyvana, the Half-Dragon, suffice to say we were rather taken aback indeed when we saw her actually transform into a

So unless you're a truly incorrigible herpetophobic, we're confident that you'll find that not all surprises have to be unpleasant.

For this mechanics preview, we wanted to focus less on the individual abilities of our upcoming champion and talk about the skillset and character flow of

Shyvana, the Half Dragon, as a whole.

Shyvana is a melee champion that heavily rewards aggression. She does so by utilizing a modified Fury resource that accrues anytime Shyvana lands an auto-attack. Once her Fury is full, she can unleash it to transform into a

dragon, giving her substantial buffs, ability enhancements, and some upfront damage. While in dragon form, Shyvana's Fury is slowly consumed, though she can continue auto-attacking to extend the duration of the

Dragon Form and maximize her damage output with each use.

It's also worth mentioning that Shyvana's

ultimate has no cooldown, but can only be used when her reserve of Fury is full. The right set of circumstances can allow a skilled player to transform much more often than would otherwise be possible.

passive triggers benefits to each of her abilities when she auto-attacks. This is to differentiate her from the 'melee caster' paradigm embodied by some other characters, making her play somewhere between an Attack Damage carry and a fighter.

Simply put, Shyvana is for players who like any of the following:

We think this wantonly aggressive playstyle is something we haven't seen previously on the Fields of Justice. It's an exciting opportunity for players to experience a new way to play League of Legends.

Retrieved from "https://leagueoflegends.fandom.com/wiki/Shyvana/Development?oldid=3070486"
Community content is available under CC-BY-SA unless otherwise noted.