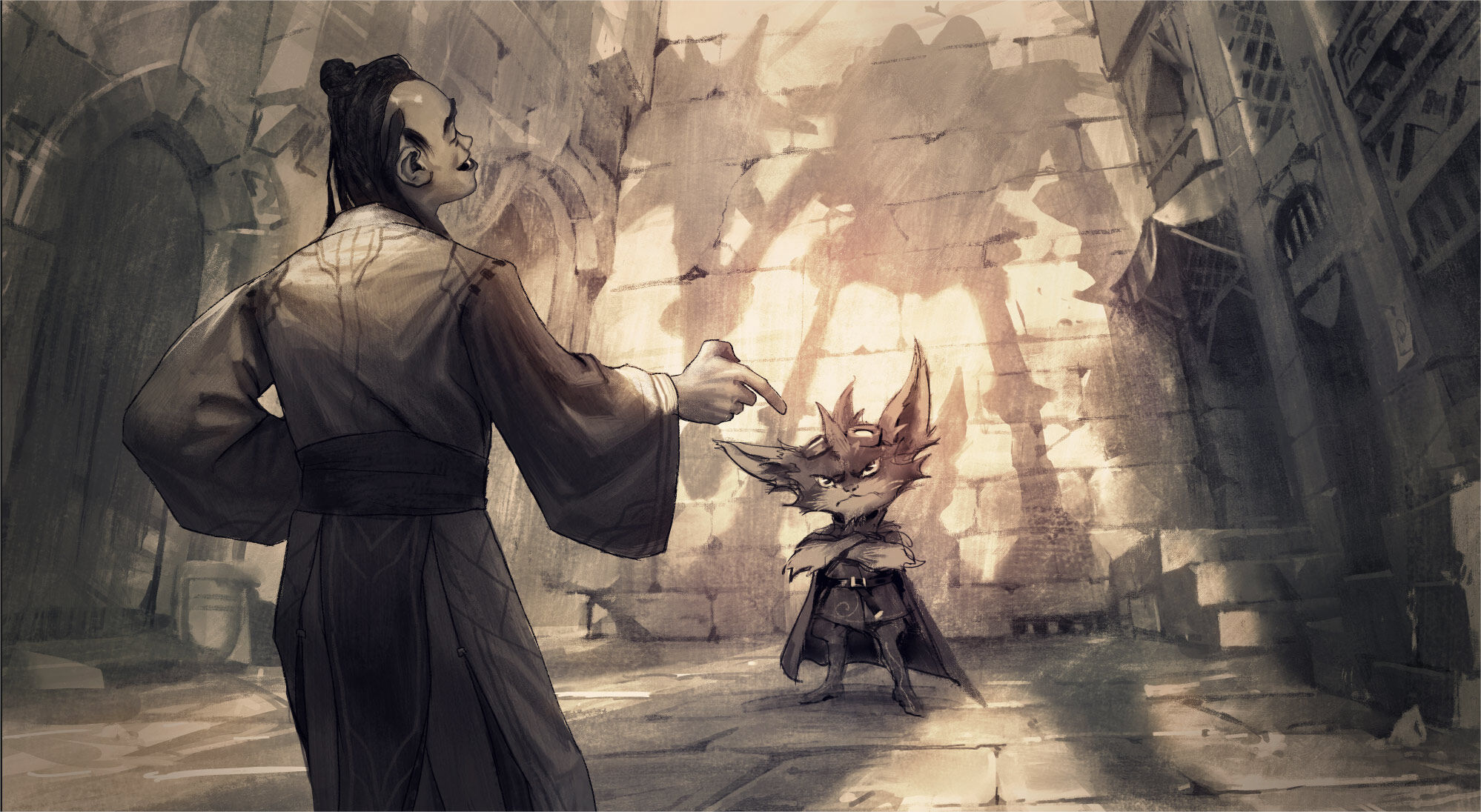 So I was walking through this little plaza off the library district in Nashramae—super dusty, flagstones older than empires, and usually pretty quiet.

So I was walking through this little plaza off the library district in Nashramae—super dusty, flagstones older than empires, and usually pretty quiet. Having just out-negotiated those dumb human merchants in the Grand Marketplace, I was feeling good. I'd been all “You want how much for that teapot?!” and “There’s no way that’s an authentic Ascended-age mace with that iconography!”

But a whole day around mortals was enough for me. If I had to hear another cheery “Water and shade to you!” greeting, I was gonna get heated.

Anyway, I'd almost gotten my cart full of treasure to my stall, thinking how great it'd be to get back in my junkyard, when whammo! I was flat on my backside.

I jumped back on my feet in a heartbeat, surrounded by mortals again. But these were younger humans, a bunch of ’em, and most of ’em were laughing at the scrawny kid who’d slammed into me and my cart. He was trying to pick himself up off the ground and onto the sorriest excuse for a mech I’d ever seen—a board with wheels—and he wasn’t laughing. Just kept apologizing.

I said, “Do I look like your grandfather?” This kid didn't have my winning smile, or my razor-sharp cheekbones, and his ears weren't even furry, so there was barely any family resemblance.

Anyway, the laughing kids had a ringleader: a nasty-looking boy wearing an oversized Noxian-style tunic and iron-capped boots. He said, “Where d’you think you’re rolling, armadillo-bug?”

My hackles went up until I realized he was talking to the scrawny kid. But still, that's a pretty mean thing to say!

This ringleader didn't stop there. He was all, “You’re Shuriman trash, Anaktu. You’re ugly and you can’t even walk.” He pointed at my broken cart. “The empire doesn’t need useless things. We should throw you with the rest of the garbage on this old man’s pile of junk.”

Now I was seeing red. Steam right outta my ears. So I got up in the big bully's face—well, up in his knees—and I said, “Hey, kid. You better apologize.”

He scoffed with his stupid face, “You don’t know who you’re dealing with, old man. I’m Kesu Rance. Son of Governor Rance! Walk away, or we’ll clear this plaza of all its trash!”

Of course, I walked.

I mentioned my stall, right? Shuttered, overlooked, and full of bric-a-brac that's way too good to ever sell to humans. It's a cover—a front—for where the portal back home appears once I set things up juuuuust right.

Meanwhile, Kesu was so busy monologuing to his club-wielding amateur thugs about being the strong future of Shurima that he didn't even notice me until I was blocking out the sun from the cockpit of the sweetest of bipedal mechs, my beloved Tristy.

“Walker and shade to you, Kesu.”

I hadn't, of course. That comes later.

Now, I'm an unbiased storyteller, so I'll mention Tristy might have had an ever-so-slight malfunction around this point. Barely worth noting, really, but in the interest of tellin’ you everything, there was... a hiccup. A hesitation. A stoppage.

Tristy and me were the definition of intimidating, but that hitch was making some of those older kids bold, and one of them bashed my mech's leg with a club! “You’re just a dumb old man with a dirty pile of junk. There’s only one of you against all of us,” she said, swinging her hand to indicate about a dozen armed, angry-looking snots.

And then who should roll up—still piloting the worst mech ever—but the scrawny kid, Anaktu.

While I applied percussive maintenance to Tristy's precision mechanisms, I noticed he'd grabbed the “one hundred percent authentic” Ascended-age mace from my cart. I'd have to have a chat about personal property with my “grandson” later.

But Kesu just laughed and tried to kick him! The little guy pivoted on his rolling board and swept the mace under Kesu's other leg, and whack! The bully went down hard.

With a shout, Anaktu took the fight to the rest of ’em. Surprised ’em, too, because within seconds, he’d gotten two big ones backed into a corner. Too bad he didn’t see Kesu coming at him from behind with the torn-off handle of my cart, ready to clonk him.

But Anaktu wasn’t alone either.

Tristy sprang back to life, and bam! I was zooming across the plaza. We skidded to a stop, kicking up dust, and I pulled the trigger.

Remember that harpoon I mentioned? Yeah, I

electro-harpooned that cart handle mid-swing. I’d like to see a certain other yordle pull off a demonstration of extreme marksmanship like that!

And Kesu? He toppled into the dust. Anaktu heard the commotion and spun around. Gave me a big smile.

“Yeah, yeah, get up here,” I said, giving him a hand up to Tristy's cockpit. “The view’s better.”

He said something like, “You don’t have to tell me twice!” which is a pretty cool thing to say under the circumstances.

And then Tristy went pew pew and zap zap zap, and I let Anaktu activate the flamespitter, but only to scare the bigger kids. Anyway, Tristy and me were awesome and I guess Anaktu wasn't bad for a mortal, and soon the bullies were running away.

Grinning, I said to Anaktu, “This is gonna be bumpy.” Then everything shook and the air was full of rockets.

The bullies got as far as the archway over the plaza's exit when boomboomboom the rockets slammed into the ground, flaming and zapping anything nearby, barring their escape.

So there they were, stuck between the

Equalizer's wall of fire and Runeterra's finest mechanized pilot. I was about to demand that apology, when Anaktu climbed down, rolled up to Kesu, and asked, “Why are you so mean?

Kesu whined something about his new Noxian dad, how he wanted to impress him. It was pretty boring, really.

The rockets sputtered and died, and the other bully kids fled, leaving Kesu behind. He started to back away, too.

“Hold it!” I yelled, harpoon at the ready. “What about my apology?”

As I pulled back my hood, he finally figured out I wasn't just some old man, because his eyes were buggin’. He bowed down in the dust, saying, “Master Yordle, I’m sorry I threatened you—”

But I stopped him. “You think I care about threats? Ha! Try again.”

He said, “I’m sorry for fighting—” but I cut him off there, too.

“Nope. I’m ready for round two if you don’t apologize for the right reason.”

“I shouldn’t have been so mean to Anaktu—”

“You disrespected junk!” I shouted. “Junk is not garbage. It’s pure potential! Dumb people don’t see its worth, but with imagination and hard work and love, junk can be turned into the finest mech a yordle could dream of! And other stuff.”

Kesu was obviously awestruck at my logic, because he was speechless. When he found words, he said, “Uh… I’m sorry…?”

So I finally got the apology that junk deserved.

Anaktu helped Kesu out of the dirt. They clasped arms and there were tears or something, but I'd had enough of mortals, so Tristy and I turned to head home.

“Obujan, your mace! You must want it back.” Anaktu rolled over to hand it to me.

Wouldn't you know, a mortal who respects junk.

“Keep it,” I said. I mean, if you can't spoil your grandkids, what's the point?